Abraham Lincoln’s Emancipation Proclamation was met with both roars of approval and curses of outrage. Many of the most vocal supporters spoke in moral and political terms, arguing that slavery was either a sin or an abuse of intrinsic human freedom. But a third case was made too, one often overlooked today: slavery had to end because it violated the laws of the free market.
The leading voice of this economic case for emancipation was Edward Atkinson, an agent and treasurer for several Northeastern cotton mills who knew more than anyone else about the financial and manufacturing aspects of the industry. He was an early member of the Free Soil Party, and soon after joined the newborn Republican Party in its quest to halt the expansion of slavery into the West. In 1859 he raised money to support John Brown’s raid on Harpers Ferry, and just after the war began he joined the Boston Emancipation League. When it appeared that Britain and France might recognize the Confederacy, he was among the first to urgently advocate the destruction of slavery as the most direct way to end the rebellion before they did.

But Atkinson’s hatred of slavery was animated less by moral certainty or political conviction than by his ardent faith in free trade. In this respect he was at odds with many of his New England colleagues, most of whom believed that cotton profits depended upon slavery. Atkinson believed that cotton could be cultivated by whites and free blacks “with perfect ease and safety.” The fact that he had to make the case so forcefully should remind us that for many Americans, a South without slavery was simply unthinkable.
Horace Greeley, the pro-Republican editor of The New York Tribune, liberally quoted Atkinson’s works to refute Southern claims that cotton profits demanded the continued protection of slavery. But rather than make a moral case — like so many abolitionists had for decades — Atkinson pointed to the question of efficiency. Thus when Lincoln announced the preliminary Emancipation Proclamation in the fall of 1862, Atkinson leapt at the opportunity to persuade his colleagues to embrace Lincoln’s plan as the first step toward a radically different future for the American South. Such arguments were not new, of course. But part of what made Atkinson’s case against slavery unique was his innovative use of cartography to showcase the inefficiency of slave labor. 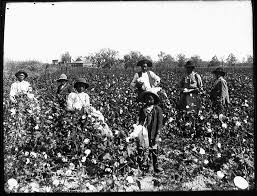 Such layered “thematic” maps were still somewhat rare in 1860, though they spread rapidly in subsequent decades. Two years earlier, Frederick Law Olmsted had designed a pathbreaking map of cotton cultivation, but Atkinson’s was an even more ambitious attempt to integrate several classes of information in a single image. The dark lines on the map encompass the principal cotton-growing regions of 1860, while the dotted line to the north marked the outer limits of cotton cultivation. Atkinson then added a line to mark the mean summer temperature, his method of showing that—according to the laws of nature—a far greater area could potentially be devoted to cotton. (He did not, however, acknowledge the very real limitations of soil composition.)
Oddly enough, Atkinson’s attempt to show that cotton could expand evoked the great fear sparked by the Kansas-Nebraska Act of 1854. As Lincoln put it in his speech at Peoria, Ill., “a glance at the map” showed climate was no barrier to plantation agriculture. For Atkinson, the westward growth of cotton — cultivated without slavery — was a welcome sign of prosperity.
Perhaps most powerful was Atkinson’s attempt to measure the inefficiency of slavery through the 1860 Census. The shaded squares on the map represent annual production of cotton in each state relative to its size. By Atkinson’s measure, less than 13 percent of the land in the six principal cotton states had even been cultivated, a shocking statistic for a nation taught to fear the economic and political power of slaveholders. Rather than being the country’s agricultural powerhouse, “king” cotton actually constituted just 2 percent of the total acreage of those states. These figures paled in comparison to the amount of land devoted to agricultural production in the Northeast and the Midwest.
This was an utter violation of capitalism, Atkinson argued. Not only had slave labor hampered Southern agriculture, but it had driven away countless potential immigrants. Northern cotton manufacturers had not just the right, but the obligation to demand the introduction of free labor. He proudly noted that free white labor in Tennessee and Texas already produced nearly one-ninth of the region’s cotton output. He even attempted to implement his ideas in late 1863 by supporting the cultivation of cotton with free black labor behind Union lines.
Atkinson’s description of the “disturbing” concentration of the black population in the cotton states — and his assumption that whites were more industrious — indicates a racial prejudice that was entirely typical of the era. But by framing his arguments in economic terms, he hoped to appeal to those Northerners who remained unmoved by the moral and political arguments for abolition. This broadened support for emancipation might in turn pressure Lincoln to extend the proclamation beyond its wartime limits.
Atkinson’s use of this data was surely controversial and selective, but his ideas circulated widely and drew strong approval. When the map was reprinted in Benson Lossing’s popular late 19th-century history of the war, many young Americans learned to skewer the antebellum logic of the “cotton kingdom.” And his map reminds us that the concept of free labor — so assumed today — demanded a wholesale reimagination of the American South.