By WILLIAM YARDLEY
Published: February 7, 2013
Cardiss Collins, who reluctantly ran for a Chicago Congressional seat left vacant when her husband died in a plane crash and went on to become Illinois’s first black congresswoman, serving for nearly 25 years as a voice for racial and gender equality and expanded health care for the poor, died on Sunday in Arlington, Va. She was 81.

Her death was confirmed by Representative Danny K. Davis, who succeeded her in 1997 after she retired from Congress.

Mrs. Collins’s husband, George W. Collins, had served two years when he was among 45 people killed in the crash of United Airlines Flight 553 near Midway Airport in Chicago on Dec. 8, 1972. Local Democrats, led by Mayor Richard J. Daley, quickly endorsed Mrs. Collins to succeed him. Mrs. Collins, then 41 and an auditor for the Illinois Revenue Department who was worried about the couple’s 13-year-old son, Kevin, was wary of running but eventually agreed to do so. 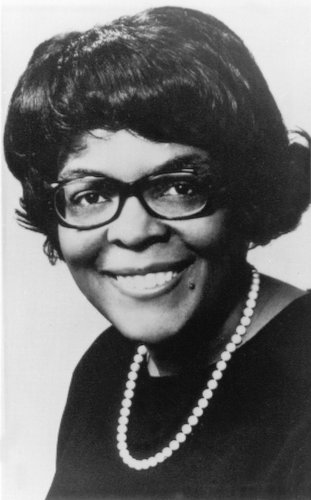 She campaigned little but easily won the primary in April and cruised through the general election in June with 92 percent of the vote. Six years later, and after some early struggles in office — she had never considered a political career before she was thrust into one — she became chairwoman of the Congressional Black Caucus. For much of the 1980s, she was the only black woman in Congress.

“In the last six years, my biggest roadblock has been shyness,” Mrs. Collins told The Washington Post in 1979. “I was basically an introvert, but once people learned I had something to say, I gained confidence.”

Mrs. Collins was openly critical of President Jimmy Carter, questioning his commitment to social programs and minorities. She did not invite him to speak at the caucus’s annual fund-raising dinner in 1979, although he had spoken there in previous years, and she expressed support for Senator Edward M. Kennedy when he signaled that he would run against Mr. Carter for the Democratic nomination in 1980.

When Ronald Reagan was elected that fall, she was no easier on him when he proposed cutting social programs.

“Mr. President, if you promise me you won’t hurt the poor I’ll sit down right now,” she said at a meeting in March 1981 after challenging Mr. Reagan’s description of welfare cheating.

Mrs. Collins, who rose to leading roles on a range of Congressional committees, was also a steady supporter of equity in college athletics, pressing the N.C.A.A. to honor the requirements of Title IX and requiring colleges to disclose more details about how they spent federal money.

She was particularly assertive on affirmative action and minority employment issues, criticizing various agencies and industries for what she called their poor records of hiring minorities. The Smithsonian Institution and the airline industry were among her targets.

Cardiss Hortense Robertson was born on Sept. 24, 1931, in St. Louis. Her family moved to Detroit when she was 10, and she graduated from high school there before attending Northwestern University in Chicago. After college, she initially worked as a stenographer at the Illinois Department of Labor. She married Mr. Collins in 1958.

Her survivors include her son and a granddaughter.

Sorry BBC, it's blacks who have no future in South Africa