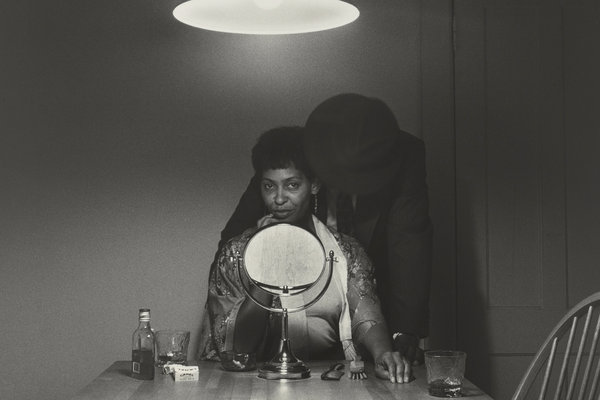 Carrie Mae Weems in a photo from her “Kitchen Table Series.” More Photos »

WHEN Carrie Mae Weems was first teaching photography in the late 1980s at Hampshire College in Massachusetts, she was struck by the difference in how her male and female students presented themselves in pictures. “The women were always turning away from the camera, always in profile,” said Ms. Weems, demonstrating by obscuring her face seductively with her graceful hands. “They never squared themselves. The boys were squaring themselves.”

At night she would return to her studio to work on her own photographs that told a different story. She centered herself at the end of a kitchen table and composed vignettes about the life cycle of a romance, the camaraderie among female friends, the demands of motherhood and finally her solitude, all unfolding at the table under a harsh, expository overhanging light. These photographs in “Kitchen Table Series,” completed in 1990, are accompanied by 14 panels recounting the path of a 38-year-old woman with a “bodacious manner, varied talents, hard laughter, multiple opinions,” as a panel says, who resists classification and embraces complexity.

Using herself as a surrogate for all self-possessed women and controlling the narrative as both subject and photographer, Ms. Weems found her artistic voice. The series was shown widely, including at the Museum of Modern Art in “Pleasures and Terrors of Domestic Comfort” in 1991.

“I emerged in that incredible moment in the 1980s when all kinds of social questions about subjectivity and objectivity, about who was making, who was looking” were being asked, Ms. Weems said in a recent interview at the Jack Shainman Gallery in Chelsea, which represents her work. She, along with fellow African-American artists like Glenn Ligon, Lorna Simpson and Gary Simmons, began to receive more recognition than black artists had previously seen. “There was a real shift,” she said. 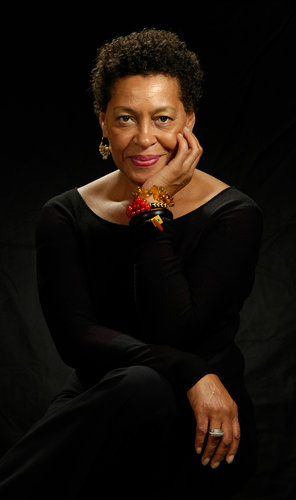 The painter Mickalene Thomas was inspired to become an artist after seeing “Kitchen Table Series” at the Portland Art Museum in Oregon as a student in the early 1990s. “It was the first time I saw work by an African-American female artist that reflected myself  and called upon a familiarity of family dynamics and sex and gender,” Ms. Thomas said. Now 59, Ms. Weems is having her first comprehensive retrospective, which opens on Friday at the Frist Center for the Visual Arts in Nashville and includes some 225 photographs, videos and installations, from her earliest, never-before-published ’70s documentary photographs influenced by Roy DeCarava and Henri Cartier-Bresson to brand-new pieces referring to works by Marcel Duchamp and Ana Mendieta, among other artists. It will travel to the Portland Art Museum in Oregon, where she grew up and is home to almost 400 members of her close-knit extended family, as well as to the Cleveland Museum of Art, the Cantor Center for Visual Arts at Stanford University and the Solomon R. Guggenheim Museum in New York.

“When you’re talking about Carrie Mae Weems, you’re going to talk about race and gender and classism,” said Kathryn Delmez, curator of the exhibition. “But I really think it goes beyond that to her desire to insert all marginalized people into the historical record, as she says, to tell the stories that have been ignored or forgotten or erased. Through Carrie’s lens she’s looking at who’s writing history, who has the power to influence other people’s lives.”

In her series “From Here I Saw What Happened and I Cried” (1995-96), for instance, she appropriated 19th-century daguerreotypes of slaves and presented them tinted blood red and etched with text like “An Anthropological Debate,” “Some Said You Were the Spitting Image of Evil” and “You Became Playmate to the Patriarch.”

“What can this black body project, and how will that projection be understood and received no matter how you attempt to shift it?” Ms. Weems asked. “It’s laid with a certain kind of history that’s almost insurmountable. I’m always attempting to push against it, to insist that there be another kind of read.”

In person Ms. Weems has a regal bearing and easily forges moments of intimacy. Her strong physical presence and rich, melodic voice are central to her still photos and video pieces over the decades, in which she sees herself serving variously as alter ego, muse and witness to history. She studied movement at Anna Halprin’s progressive Dancer’s Workshop after moving to San Francisco at 17.

For her 20th birthday her boyfriend gave her a camera. “Suddenly this camera, this thing, allowed me to move around the world in a certain kind of way, with a certain kind of purpose,” she said. In 1976 she moved to New York to study photography at the Studio Museum in Harlem and then returned west to earn a bachelor of fine arts degree at the California Institute of the Arts in 1981. She received a master of fine arts degree at the University of California, San Diego, in 1984.

During her schooling she started “Family Pictures and Stories,” completed in 1984. Ms. Weems, who had her own daughter at 16, grouped candid black-and-white photographs of her sprawling middle-class family, in which she is one of seven children, with text and audio recordings about the members’ lives, especially the older generation’s experiences in Tennessee and Mississippi before moving to Oregon. Responding to the 1965 Moynihan Report that asserted that African-American communities were in shambles because of weak family structures, Ms. Weems put forward an authentic and unvarnished portrait of a strong African-American family as she knew it. It was the beginning of using herself as a stand-in for a larger subject and integrating word with image to approach different levels of storytelling.

In “Not Manet’s Type” (1997) she used caustic humor to expose the invisibility of women, especially black women, in the canon of art history. In the text accompanying photographs of herself undressed in her bedroom, she recognizes that she would not have been the preferred type of model for Manet, Picasso or Duchamp. “But it could have been worse/Imagine my fate had de Kooning gotten hold of me,” she wrote, before stating that she would take “a tip from Frida” Kahlo and become her own model and creator.

Ms. Weems, who moved to Syracuse in 1996 to live with her husband, Jeff Hoone, and maintains a studio in Brooklyn, said she saw the same set of questions about power playing out in the art world as in society at large. “I can spend an evening at most art functions in New York City and not see a single other person of color,” she said. “Now. Today. That’s shocking to me.”

In her “Museum Series,” which she started in 2007, she photographs citadels of art like the Louvre, the British Museum and the Philadelphia Museum of Art. She appears in front of each august edifice in a long, black dress with her back to the camera, a wistful, solemn presence that suggests both a longing for admission and a testament to exclusion. She has similarly materialized before grand antebellum architecture embedded with the history of slavery in the “Louisiana Project” (2003) and on ancient streets in Europe in her 2006 series “Roaming.”

Photographed from behind in all these images, Ms. Weems’s elegant, silhouetted figure doesn’t immediately announce her race. “We can set that aside,” she said. She said she saw herself “functioning as a guide in an architectural place that asks another set of questions about power and relationships that perhaps then we can all then stand in front of. I am the first point of reference to the viewing. Then you come along with me, hopefully.”