By Robert Brauchle,    May 17, 2013
HAMPTON — A cemetery carrying the namesake of North America’s oldest black family has languished for years under iffy ownership and infrequent maintenance.
That two-acre plot may have found a friend in Mayor Molly Joseph Ward, who hopes to form a non-profit group to take title to the property.
“I think it’s such a unique part of history,” the mayor said. “And it’s not just Hampton history. This is something that’s significant to the region and the nation.”
Just east of Aberdeen Road, the Tucker Family Cemetery is a wooded plot surrounded by low-slung brick homes built in the 1950s. Accessible by narrow strip of grass along Sharon Court, the property is widely believed to be the site where the first black baby born in English North America is now interred. Even though William Tucker’s grave is not marked, visitors to the cemetery are greeted with a granite marker that reads “Tucker’s Cemetery, First Black Family, 1619.”

Ward has called the cemetery’s current condition “deplorable.”
Hampton property records show the lot is owned by “Excelsior Club” in care of Alexander Tucker. That owner has abandoned the property leaving it in a “limbo state,” City Attorney Cynthia Hudson said.
The city attorney’s office has worked on the issue, although a consulting firm might need to be called to help with the process, Hudson said. 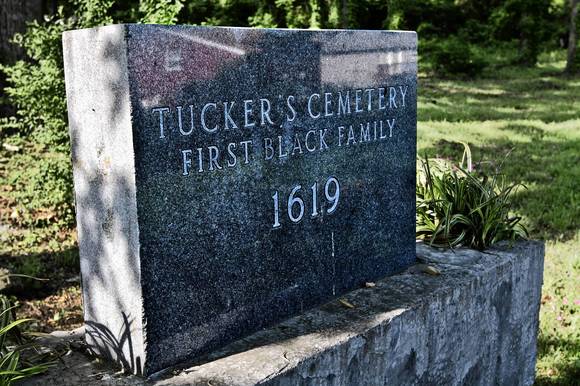 
The mayor said her idea is still in its infancy, although she’s looking for help from anyone interested in historical property.
Project 1619 is a group formed to raise awareness about the landing of the first Africans at Old Point Comfort in 1619. The group is raising funds to build a monument at Fort Monroe that is “symbolic of the arrival of the first Africans, or their ‘Triumph Over Slavery,'” according to the group’s website.
Calvin Pearson, the group’s founder, acknowledged the cemetery’s importance even if the costs associated with restoring and maintaining the cemetery preclude Project 1619’s involvement with the property.
He suggested the city also apply for state and federal grants for maintenance and for the city to seek a national historic landmark designation for the property.
“This could be a major tourist attraction along with Fort Monroe,” wrote Pearson in a response to questions. “Project 1619 is set up to raise money for the monument at Fort Monroe. We do not want any other fund raising project such as the cemetery to take effort and funds away from the monument.”
Ward’s project has some backing from City Council.
“To not move forward with all due haste with the Tucker Family Cemetery would almost be criminal given our responsibilities,” Councilman Chris Stuart said at a May 8 City Council meeting.
Councilman Donnie Tuck said clearing up the ownership issues with the property is “a great project,” although he expressed concern for the numerous other cemeteries in Hampton with ownership issues.
Church and community groups have relied on volunteers in recent years to maintain Pleasant Shade Cemetery, near the Newport News border, after an absentee owner abandoned the property.
The mayor said the city will work with any group that wants to take ownership of any cemetery abandoned by the previous owner.
“It’s a tourist destination and it’s something unique to Hampton,” Ward said of the Tucker cemetery. “No one is responsible and no one is taking care of it and it’s an incredibly historic site. It’s something that really puts Hampton on the map.”
Tucker Family Cemetery
Where: Accessible from a strip of grass next to 3 Sharon Court, Hampton
What: Tucker Family Cemetery is where descendants of the first black baby born in English North America are interred.
How to help: Email Mayor Molly Joseph Ward at [email protected]

The 1965 Murder of John Queen: Justice In The Segregated South

Journey of Reconciliation of 1947