By SAMUEL G. FREEDMAN    Published: August 30, 2013
CHICAGO — Two generations and 700 miles away from her grandparents’ farm in Mississippi, Juanita O’Neal sat in a parking lot beside the four lanes of West 95th Street here, selling peas and okra and peaches. She wore an apron embroidered with the image of a ripe tomato and the words, “Granny and Kids Garden Patch.”

Over those generations, an essential chapter of the African-American epic had occurred. Ms. O’Neal’s grandparents died without a will, she said, and so the family land that she had helped till as a girl was lost. She moved to Chicago with her parents as part of the Great Migration and spent 20 years as a teacher.

In retirement, she bought some acreage in the flatlands 60 miles south of Chicago and plunged her hands back into the soil. On a recent Saturday morning, like all the Saturday mornings of the summer, she had driven with a contingent of black farmers to sell their bounty at a market sponsored by one of Chicago’s most formidable black churches, Trinity United Church of Christ.

“I can’t correct the past,” said Ms. O’Neal, 68. “I can’t blame anyone for the past. I have to take the accountability. But if my grandparents are looking down on me, they’re saying, ‘Good job.’ ”

The collaboration with Ms. O’Neal and a half-dozen other black farmers from an area known as Pembroke Township fulfills two missions for Trinity’s leaders.

It helps support the precarious livelihood of the farmers, and it addresses the congregation’s need for fresh produce in an expanse of the South Side considered a “food desert” for its paucity of supermarkets and greengrocers.

“We pray before we start,” said Rose Scott, the deacon in charge of the farmers’ market, said of the Saturday morning ritual. 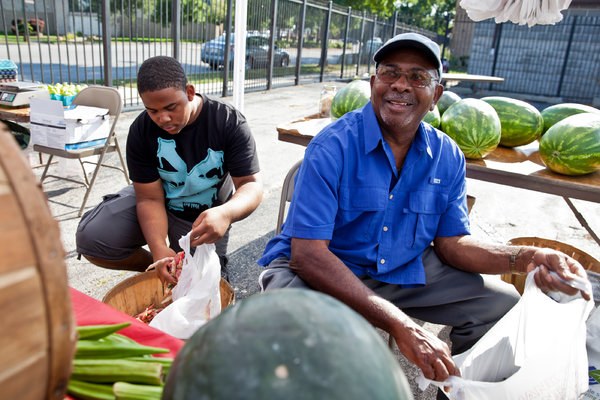 Nathan Weber for The New York Times——T. C. Barker, 73, with his grandson, C. J. Dodd, 14, travels from his land 60 miles south of Chicago to sell his produce on Saturday mornings at Trinity United Church of Christ.

“Everyone who’s here, we circle and we pray and we ask God to order our steps. Don’t let this work be the ‘us’ in us. Let it be the God in us.”

The market was born in a conversation about five years ago between Trinity’s pastor, the Rev. Otis Moss III, and his wife, Monica, a mother of two with a fervent interest in health and wellness.

She pointed out the difficulty that Trinity members and other neighborhood residents had finding fresh fruits and vegetables close by at affordable prices.

The struggles of black farmers nationally — the heirs to the unredeemed promise of “40 acres and a mule” after being liberated from slavery — was already well known in Trinity circles as part of the backdrop for two lawsuits by black farmers alleging discrimination by the federal Agriculture Department. (Some of the cases were settled in 1999, others in 2010 and 2011.)

Just an hour’s drive from the brick bungalows and “L” tracks of the South Side, meanwhile, Illinois has its own black farmers, many of them living in the Pembroke Township area, which had been settled by freed slaves. Some had already begun to sell produce on a small scale through black churches in Chicago.

Mr. Moss decided to devote a period of scriptural study to the Bible’s teachings about the connection between food and justice. He found no lack of scriptural support for a church-based market.

Psalm 24 told him, “The earth is the Lord’s, and everything in it.” The prophet Amos reassured the ancient Jews of God’s promise that “they will make gardens and eat their fruit.”

“We’d been emphasizing healthy eating at church, and so we asked our kitchen to buy from the black farmers,” Mr. Moss, 42, recalled.

“And then we said, ‘Why not bring the farmers here?’ ”

Most of them had family stories similar to Ms. O’Neal’s, with this generational trajectory. Grandparents in the Jim Crow South sharecropped for white overseers but also owned small garden plots. Parents joined the exodus toward jobs in the North. Children returned to the land.

Ervin Ivy, 80, known as Pop, had been working as a printer in Chicago before buying 10 acres to grow collard greens, butter beans and other crops he remembered from the South. T. C. Barker purchased his two acres in Pembroke Township after 37 years as a Chicago bank’s maintenance man.

For customers, too, the market evokes a sense-memory of rural childhood.

“I picked many peas in Beatrice, Ala.,” said Sonya Griffin, the project manager for several federal buildings in Chicago, as she looked over Ms. O’Neal’s harvest.

“Everything we ate, we got out of the land. The nearest grocery store was about two hours away.”

On Chicago’s mostly black South Side, the supermarkets may not be quite that far away, but they are sparser than in the whiter neighborhoods downtown and on the North Side.

That disparity helped endow the farmers’ market program at Trinity with an aspect of social justice that speaks to the church’s tradition of Afro-Christian liberation theology.

The 8,500-member church, which once counted Barack Obama as a member, gained notoriety during the 2008 election when controversial sermons delivered years earlier by its retired pastor, the Rev. Jeremiah A. Wright Jr., were disseminated by journalists.

The result — besides Mr. Obama’s public break from Mr. Wright, who had been a religious mentor to him — was the reduction of Trinity’s track record of decades of constructive accomplishments to a cartoon of sputtering militancy.

In its way, the farmers’ market helps correct the distortion. On a typical summer Saturday, about 150 customers patronize the farmers, who make as much as $150 for a five-hour stint.

Trinity helped provide the farmers the liability insurance they needed to travel from Pembroke Township and sell off-site.

In keeping with Trinity’s emphasis on wellness, the market day includes classes in Zumba or other exercise programs.

“My garden has a spiritual component to it,” said Paula Anglin, who grows crops for the farmers’ market on a small lot that Trinity owns near the church.

“Everybody feels the spiritual relaxation — I’ll call it that — of communing with God and doing good for the neighbors.”

Tiny Mediterranean Nation of Malta , Awash in African Immigrants With Nowhere to Go