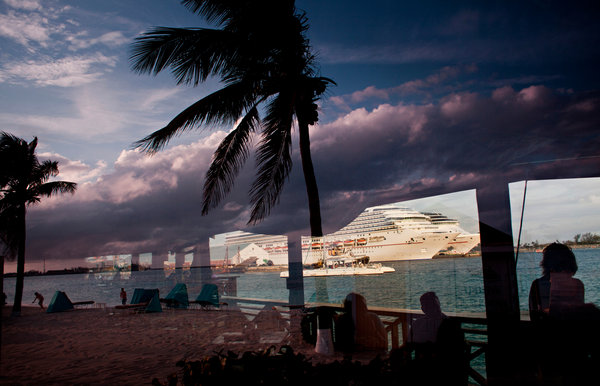 NASSAU, the Bahamas — A brand new $35 million stadium opened here in the Bahamas a few weeks ago, a gift from the Chinese government. The tiny island nation of Dominica has received a grammar school, a renovated hospital and a sports stadium, also courtesy of the Chinese. Antigua and Barbuda got a power plant and a cricket stadium, and a new school is on its way. The prime minister of Trinidad and Tobago can thank Chinese contractors for the craftsmanship in her official residence.

China’s economic might has rolled up to America’s doorstep in the Caribbean, with a flurry of loans from state banks, investments by companies and outright gifts from the government in the form of new stadiums, roads, official buildings, ports and resorts in a region where the United States has long been a prime benefactor.

The Chinese have flexed their economic prowess in nearly every corner of the world. But planting a flag so close to the United States has generated intense vetting — and some raised eyebrows — among diplomats, economists and investors.

“When you’ve got a new player in the hemisphere all of a sudden, it’s obviously something talked about at the highest level of governments,” said Kevin P. Gallagher, a Boston University professor who is an author of a recent report on Chinese financing, “The New Banks in Town.”

Most analysts do not see a security threat, noting that the Chinese are not building bases or forging any military ties that could invoke fears of another Cuban missile crisis. But they do see an emerging superpower securing economic inroads and political support from a bloc of developing countries with anemic budgets that once counted almost exclusively on the United States, Canada and Europe.

China announced late last year that it would lend $6.3 billion to Caribbean governments, adding considerably to the hundreds of millions of dollars in loans, grants and other forms of economic assistance it has already channeled there in the past decade.

Unlike in Africa, South America and other parts of the world where China’s forays are largely driven by a search for commodities, its presence in the Caribbean derives mainly from long-term economic ventures, like tourism and loans, and potential new allies that are relatively inexpensive to win over, analysts say.

American diplomatic cables released through WikiLeaks and published in the British newspaper The Guardian quoted diplomats as being increasingly worried about the Chinese presence here “less than 190 miles from the United States” and speculating on its purpose. One theory, according to a 2003 cable, suggested that China was lining up allies as “a strategic move” for the eventual end of the Castro era in Cuba, with which it has strong relations.

But the public line today is to be untroubled.

“I am not particularly worried, but it is something the U.S. should continue to monitor,” said Dennis C. Shea, the chairman of the U.S.-China Economic and Security Review Commission, a bipartisan Congressional panel. But, he added, “With China you have to be wary of possible policy goals behind the effort.”

This archipelago, less than a one-hour flight from Florida, has gotten particular attention from the Chinese. Aside from the new stadium, with its “China Aid” plaque affixed prominently at the entrance, Chinese workers here in the Bahamas are busy helping build the $3.5 billion Baha Mar, one of the region’s largest megaresorts.

Beyond that, a Chinese state bank agreed in recent weeks to put up $41 million for a new port and bridge, and a new, large Chinese Embassy is being built downtown.

The new stadium here, Bahamian officials said, was in part a reward for breaking ties with Taiwan in 1997 and establishing and keeping relations with China.

It is one of several sporting arenas that China has sprinkled in Caribbean and Central American nations as gratitude for their recognition of “one China” — in other words, for their refusal to recognize Taiwan, which Chinese officials consider part of their country.

“They offered a substantial gift and we opted for a national stadium,” said Charles Maynard, the Bahamian sports minister, adding that his government could never have afforded to build it on its own.

In this enduring tug of war with Taiwan, others have switched, too, with a little financial encouragement. Grenada ended relations with Taiwan in 2004, and it is now in talks with China about getting a new national track and field stadium. The parting has not been entirely amicable; Taiwan and Grenada are now locked in a financial dispute over loans that Grenada received to finance construction of its airport.

Determined not to be sidelined, Taiwan is seeking to solidify its existing relationships with countries like Belize, St. Kitts and Nevis, and St. Lucia — which in 2007 broke relations with China in favor of Taiwan — with a bevy of projects, many of them agricultural, including an agreement signed with Belize in recent weeks to develop the fish farming industry there.

Still, Taiwanese diplomats in the region conceded that they could never keep up with China’s largess but continued to make strategic investments in the Caribbean.

There are some commodities in the region that China wants. In August, a Chinese company, Complant, bought the last three government sugar estates in Jamaica and leased cane fields, for a total investment of $166 million. Last year, Jamaica for the first time shipped its famed Blue Mountain Coffee to China.

The Jamaican government has also received several hundred million dollars in loans from China, including $400 million announced in 2010 over five years to rebuild roads and other infrastructure.

“In order to be prosperous you need to build roads first,” said Adam Wu, an executive with China Business Network, a consulting group for Chinese businesses that has been making the case for China in several Caribbean countries.

Several analysts in the Caribbean say they believe that China eventually will emerge as a political force in the region, with so many countries indebted to it, at a time when the United States is perceived as preoccupied with the Middle East and paying little attention to the region.

“They are buying loyalty and taking up the vacuum left by the United States, Canada and other countries, particularly in infrastructure improvements,” said Sir Ronald Sanders, a former diplomat from Antigua and Barbuda.

“If China continues to invest the way it is doing in the Caribbean, the U.S. is almost making itself irrelevant to the region,” he added. “You don’t leave your flank exposed.”

In some places, Chinese contractors or workers have stayed on, beginning to build communities and businesses. So many have opened in Roseau, Dominica, that local merchants have complained about being squeezed out.

Trinidad and Tobago has had waves of Chinese immigration over the past century, but locals are now seeing more Chinese restaurants and shops, as well as other signs of a new immigrant generation.

“I am second-generation Trinidadian-Chinese, and like most of us of this era, we have integrated very well in society, having friends, girlfriends, spouses and kids with people of other ethnicities,” said Robert Johnson-Attin, 36, a mechanical engineer now with his own successful business. “It’ll only be a matter of time before it happens with the Chinese coming in now.”

Here in the Bahamas, Tan Jian, the economic counselor at the Chinese Embassy, said he believes “it’s only the start” of the Chinese presence across the Caribbean, casting it as one developing country using its growing economic power to help other developing ones.

The Bahamian government, he said, “cannot afford to build huge projects by itself.”

While the Chinese built the stadium, the Bahamas is responsible for utility hookups and the roads and landscaping outside it.

The $35 million gift “is costing us $50 million,” said Mr. Maynard, the sports minister. “But at the end of the day it will pay for itself” by putting the Bahamas in position to host major sporting events and reap the tourism revenue that comes with that.

For Baha Mar, the Chinese Export-Import Bank is financing $2.6 billion, nearly three-quarters of the cost, and China’s state construction company is a partner.

The Bahamas agreed to allow up to 8,000 foreign workers, most of them Chinese, to work on the project in stages, but it also required employment for 4,000 Bahamians, dampening concerns that Chinese workers were taking jobs. American companies will also take part in building and running it.

Mr. Jian played down any economic competition with the United States, whose tourists, he asserted, stood to benefit from China’s presence in the Caribbean. The Chinese workers here live in barracks behind the project fences, largely shielded from public view.

“We hardly know they are here,” said James Duffy, watching a track practice next to the stadium one recent afternoon, adding with a chuckle: “Except for the big things they build.”

Beyond Black and White in the Mississippi Delta

Former US Rep. Katie Hall of Indiana Dies at 73