By THOMAS KAPLAN
Published: December 8, 2012
Civil rights leaders and black lawmakers, worried that minority communities would be robbed of influence in Albany, on Saturday denounced a plan by Republicans and a group of dissident Democrats to join together to preside over the State Senate.
The politicians and leaders, led by the Rev. Al Sharpton, who organized a rally in Harlem to draw attention to the issue, vowed to pressure the breakaway Democrats to reconsider their decision before the next legislative session begins in January. All but one of the members of the proposed majority coalition are white; the Senate Democratic caucus includes 14 black and Hispanic members and is led by an African-American.
“There is an attempt to disenfranchise voters, in my opinion, in the state of New York,” Mr. Sharpton said. “There was an election. The election spoke to the will of the people. And there cannot be a back-room deal that undermines what people voted for.” 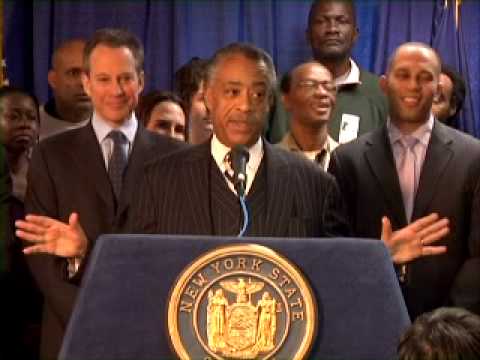 While two races remain undecided, political experts believe that Democrats will end up with a narrow numerical majority in the Senate. Yet one Democrat has said he would align with the Republicans, and four others, who formed the Independent Democratic Conference nearly two years ago, recruited a fifth Democrat on Tuesday and then said they would form a power-sharing coalition with the Republicans to preside over the chamber.
The Senate Democratic leader, John L. Sampson of Brooklyn, expressed hope on Saturday that a last-minute deal could be reached to reunite Democrats in the Senate. He announced that he would step down as leader if the Independent Democrats returned to the caucus because, he said, he did not want to be an “impediment” to a deal, adding, “This is bigger than me.”
In an interview, Mr. Sampson said he hoped the Independent Democrats, who are led by Senator Jeffrey D. Klein of the Bronx, would consider entering into a coalition-style arrangement with members of their own party.
“Our issues are more in line and more in tune than the Republicans,” he said.
Mr. Sharpton said he would hold rallies in the districts of four of the five Independent Democrats to draw attention to their actions. A number of prominent Democrats attended his rally on Saturday to show their support, including four who are expected to run for mayor of New York City next year: Bill de Blasio, the public advocate; John C. Liu, the city comptroller; Christine C. Quinn, the City Council speaker; and William C. Thompson Jr., a former city comptroller.
Ms. Quinn said that the city would be hurt if the Republicans held significant influence on the chamber and that the leadership question was “not over.”
Many of the elected officials who spoke at the rally made it clear they were concerned that blacks and Hispanics would lose out under the emerging Senate coalition. Senator Ruth Hassell-Thompson, a Democrat who represents parts of the Bronx and Westchester County, suggested there were racial undertones in the complaints that the Senate Democrats were dysfunctional when they controlled the chamber in 2009 and 2010.
“When we were being vilified as being the problem, see, nobody understood that those were code words for ‘black folks in charge,’ ” she said.
Senator Bill Perkins, a Manhattan Democrat, questioned why Gov. Andrew M. Cuomo, a Democrat, had not objected to the coalition. Mr. Perkins noted that if the Democrats gained control of the Senate, many black and Hispanic lawmakers would become chairmen of important committees.
“Ask Governor Cuomo: Where does he stand on back-room deals putting us in the back of the bus?” Mr. Perkins said.
Mr. Cuomo has said that he believes the members of the Senate should resolve their leadership themselves. Asked by a reporter what he thought of Mr. Cuomo’s role, Mr. Sharpton said he was focused on what he saw as an effort by the Republicans to steal power. The issue, he added, was not “a Cuomo story.”