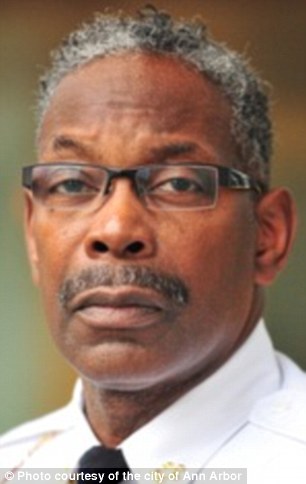 Resigned: Barnett Jones, pictured, stepped down as Flint’s administrator of public safety today after it emerged he was also working a full-time post in Detroit

A Michigan civil servant is in hot water after being exposed as holding down two six-figure public posts at the same time – earning him more than the Vice President.
Barnett Jones, has been paid $273,750 since May as Flint’s administrator of public safety and head of security for the Detroit Water and Sewerage Department, despite the fact the posts are both full-time and based 70 miles apart, according to the Free Press.
The lawman resigned his Flint role today after the newspaper began investigating his job-juggling.
Flint City Administrator, Michael Brown, told the Press he wasn’t aware of Jones’ other role.
‘We didn’t know that he was working at Detroit water and sewer,’ Brown said. ‘I was surprised and to be honest, disappointed’.
Jones’ salary broke down as $135,000 a year from Flint and $138,750 from Detroit. It gave him a total salary higher than a senator, Supreme Court judge or even Vice President Joe Biden.
Jones told the Free Press on Wednesday that he was doing justice to both jobs, when the newspaper asked him if he could juggle the two.
‘Absolutely,’ Jones said. ‘There are some days I go to both, some days I go to one. Sometimes I leave out at 8, 9, 10 o’clock at night, Saturdays. I’m a workaholic.’
‘I can’t say no to people,” he added.
He didn’t comment regarding his resignation today.  His boss in Detroit told the Press, she knew about his role in Flint but believed it was on an “as-needed basis, not full-time.”
She added that his work had been exemplary.

Long commute: Barnett Jones was working in Detroit, pictured, but also in Flint 70 miles away. Somehow the civil servant managed to hold down both jobs full time

‘I’ve seen no lack of his on-duty performance to the job,” she added. Brown agreed he had seen no drop in standards in Jones’ work in Flint.

‘He did a great job for us,’ he said. ‘We’ll be open to utilizing him as a consultant’.
Previously Jones spent 18 years working at the Oakland County Sheriff’s office where he became Captain.

He was previously a police chief in Sterling Heights and Ann Arbor.
Read more: http://www.dailymail.co.uk/news/article-2261027/Revealed-Civil-servant-secretly-working-time-public-jobs-70-miles-apart–netting-salary-higher-Vice-Presidents.html#ixzz2HmlQLI8Z