FRANKLIN, Tenn. — IN his 1948 novel “Intruder in the Dust,” William Faulkner described the timeless importance of the Battle of Gettysburg in Southern memory, and in particular the moments before the disastrous Pickett’s Charge on July 3, 1863, which sealed Gen. Robert E. Lee’s defeat. “For every Southern boy fourteen years old,” he wrote, “there is the instant when it’s still not yet two o’clock on that July afternoon.”
That wasn’t quite true at the time — as the humorist Roy Blount Jr. reminds us, black Southern boys of the 1940s probably had a different take on the battle. But today, how many boys anywhere wax nostalgic about the Civil War? For the most part, the world in which Faulkner lived, when the Civil War and its consequences still shaped the American consciousness, has faded away.
Which raises an important question this week, as we move through the three-day sesquicentennial of Gettysburg: does the Civil War still matter as anything more than long-ago history?
Fifty years ago, at the war’s centennial, America was a much different place. Legal discrimination was still the norm in the South. A white, middle-class culture dominated society. The 1965 Immigration and Nationality Act had not yet rewritten our demographics. The last-known Civil War veteran had died only a few years earlier, and the children and grandchildren of veterans carried within them the still-fresh memories of the national cataclysm. 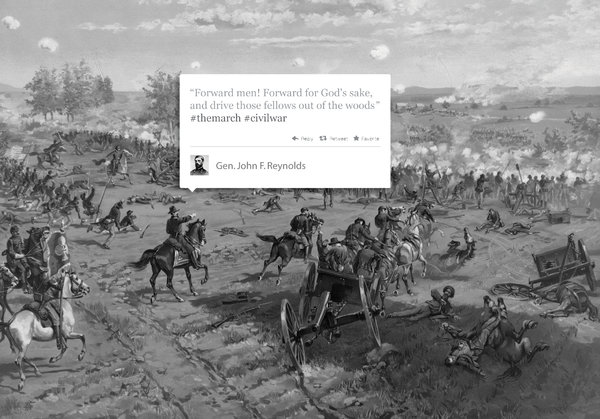 All of that is now gone, replaced by a society that is more tolerant, more integrated, more varied in its demographics and culture. The memory of the war, at least as it was commemorated in the early 1960s, would seem to have no place.
Obviously, there are those for whom Civil War history is either a profession or a passion, who continue to produce and read books on the war at a prodigious rate. But what about the rest of us? What meaning does the war have in our multiethnic, multivalent society?
For one thing, it matters as a reflection of how much America has changed. Robert Penn Warren called the war the “American oracle,” meaning that it told us who we are — and, by corollary, reflected the changing nature of America.
Indeed, how we remember the war is a marker for who we are as a nation. In 1913, at the 50th anniversary of Gettysburg, thousands of black veterans were excluded from the ceremony, while white Union and Confederate veterans mingled in a show of regional reconciliation, made possible by a national consensus to ignore the plight of black Americans.
Even a decade ago, it seemed as if those who dismissed slavery as simply “one of the factors” that led us to dissolve into a blood bath would forever have a voice in any conversation about the war.
In contrast, recent sesquicentennial events have taken pains to more accurately portray the contributions made by blacks to the war, while pro-Southern revisionists have been relegated to the dustbin of history — a reflection of the more inclusive society we have become. As we examine what it means to be America, we can find no better historical register than the memory of the Civil War and how it has morphed over time.
Then again, these changes also imply that the war is less important than it used to be; it drives fewer passionate debates, and maybe — given that one side of those debates usually defended the Confederacy — that’s a good thing.
But there is an even more important reason the war matters. If the line to immigrate into this country is longer than those in every other country on earth, it is because of the Civil War.
It is true, technically speaking, that the United States was founded with the ratification of the Constitution. And it’s true that in the early 19th century it was a beacon of liberty for some — mostly northern European whites.
But the Civil War sealed us as a nation. The novelist and historian Shelby Foote said that before the war our representatives abroad referred to us as “these” United States, but after we became “the” United States. Somehow, as divided as we were, even as the war ended, we have become more than New Yorkers and Tennesseans, Texans and Californians.
And Gettysburg itself still matters, for the same reason Abraham Lincoln noted so eloquently in his famous address at the site on Nov. 19, 1863. The battle consecrated the “unfinished work” to guarantee “that this nation, under God, shall have a new birth of freedom — and that government of the people, by the people, for the people, shall not perish from the earth.”
In that way, the Civil War is less important to the descendants of those who fought in it than it is to those whose ancestors were living halfway around the globe at the time. For if you have chosen to throw your lot in with this country, the American Civil War is at the foundation of your reasons to do so.
True, we have not arrived at our final destination as either a nation or as a people. Yet we have much to commemorate. Everything that has come about since the war is linked to that bloody mess and its outcome and aftermath. The American Century, the Greatest Generation and all the rest are somehow born out of the sacrifice of those 750,000 men and boys. None of it has been perfect, but I wouldn’t want to be here without it.