A Defiant Rancher Savors the Audience That Rallied to His Side

BUNKERVILLE, Nev. — Cliven Bundy stood by the Virgin River up the road from the armed checkpoint at the driveway of his ranch, signing autographs and posing for pictures. For 55 minutes, Mr. Bundy held forth to a clutch of supporters about his views on the troubled state of America — the overreaching federal government, the harassment of Western ranchers, the societal upheaval caused by abortion, even musing about whether slavery was so bad.

Most of all, Mr. Bundy, 67, who was wearing a broad-brimmed white cowboy hat against the hot afternoon sun, recounted the success of “we the people” — gesturing to the 50 supporters, some armed with handguns and rifles, standing in a semicircle before him — at chasing away Bureau of Land Management rangers who, acting on a court order, tried to confiscate 500 cattle owned by Mr. Bundy, who has been illegally grazing his herd on public land since 1993.  “They don’t have the guts enough to try to start that again for a few years,” Mr. Bundy said in an interview. 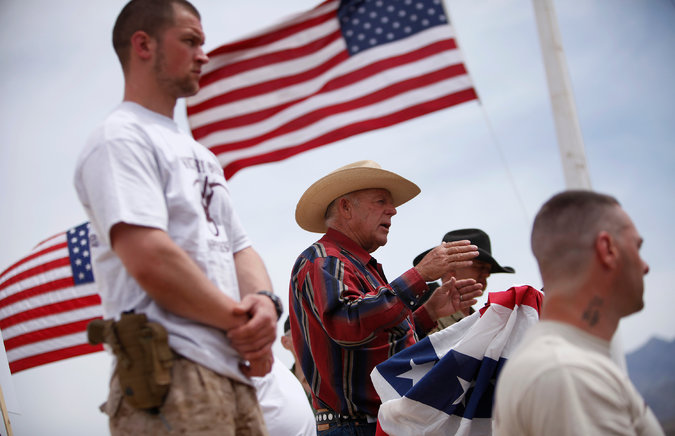 Mr. Bundy’s standoff with federal rangers — propelled into the national spotlight in part by steady coverage by Fox News — has highlighted sharp divisions over the power of the federal government and the rights of landowners in places like this desert stretch of Nevada, where resentment of Washington and its sprawling ownership of Western land has long run deep.

His cause has won support from Senator Rand Paul, the libertarian Republican from Kentucky who is likely to run for president. Senator Dean Heller, a Nevada Republican, referred to Mr. Bundy’s supporters as “patriots.” Senator Harry Reid, the Nevada Democrat who is the Senate majority leader and has a long history of pushing for protection of public lands, denounced the rancher’s supporters as “domestic terrorists.”

The dispute spilled over this week into Texas, where Greg Abbott, the attorney general and a Republican running for governor, challenged the Bureau of Land Management on reports that it was looking to claim thousands of acres along the Red River.

For now, Mr. Bundy appears to have won, forcing the government to back down after its rangers were met with armed Bundy supporters this month.

“The gather is now over,” said Craig Leff, a deputy assistant director with the Bureau of Land Management. “Our focus is pursuing this matter administratively and judicially.” 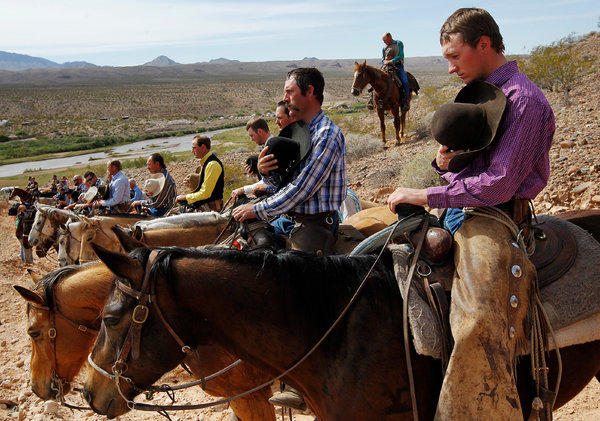 But if the federal government has moved on, Mr. Bundy — a father of 14 and a registered Republican — has not.

He said he would continue holding a daily news conference; on Saturday, it drew one reporter and one photographer, so Mr. Bundy used the time to officiate at what was in effect a town meeting with supporters, discussing, in a long, loping discourse, the prevalence of abortion, the abuses of welfare and his views on race.

“And because they were basically on government subsidy, so now what do they do?” he asked. “They abort their young children, they put their young men in jail, because they never learned how to pick cotton. And I’ve often wondered, are they better off as slaves, picking cotton and having a family life and doing things, or are they better off under government subsidy? They didn’t get no more freedom. They got less freedom.”

A spokesman for Mr. Paul, informed of Mr. Bundy’s remarks, said the senator was not available for immediate comment. Chandler Smith, a spokesman for Mr. Heller, said that the senator “completely disagrees with Mr. Bundy’s appalling and racist statements, and condemns them in the most strenuous way.” A spokeswoman for Mr. Abbott, Laura Bean, said that the letter he wrote “was regarding a dispute in Texas and is in no way related to the dispute in Nevada.” 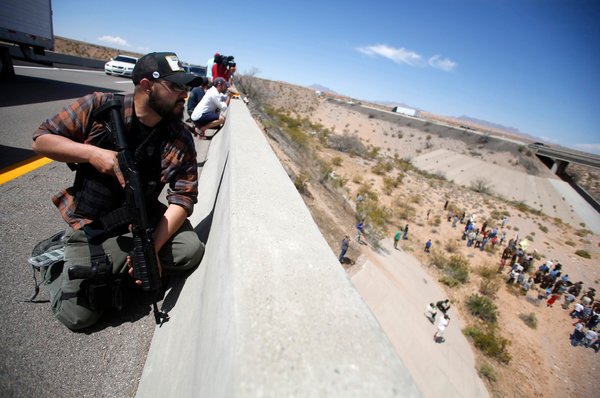 His sympathizers include dozens of militia members, many carrying weapons. CreditJim Urquhart/Reuters

The crowds may be beginning to dwindle, but for much of the past two weeks, here at Mr. Bundy’s ranch in Bunkerville, 80 miles northeast of Las Vegas, the rancher has been a celebrity, drawing hundreds of supporters, including dozens of militia members, many carrying sidearms, and members of Oath Keepers, a militia group, who have embraced him as a symbol of their anger and a bulwark against federal abuse.

He was honored at a celebratory party on Friday night attended by 1,500 people, who wore “domestic terrorist” name tags, listened to cowboy poetry and ate hamburgers, hot dogs and Bundy beef. “This is the beginning of taking America back,” said Shawna Cox, who had come from Kanab, Utah, to support him.

Mr. Bundy, whose family has grazed cattle here since they homesteaded in the 1870s, owes the government more than $1 million in grazing fees. He stopped paying after the bureau ordered him to restrict the periods when his herd roamed the 600,000-acre Gold Butte area as part of an effort to protect the endangered desert tortoise.

Mr. Bundy’s case happened to heat up around the time that Mr. Paul, building the foundation for a presidential campaign, struck a chord with some members of the Republican Party with warnings about governmental overreach. Mr. Paul’s latest book is titled “Government Bullies: How Everyday Americans Are Being Harassed, Abused and Imprisoned by the Feds.” In the Bundy standoff, Mr. Paul has criticized the federal government as overreaching with its use of regulations, but cautioned against any violence or lawbreaking.

Rob Mrowka, a senior scientist with the Center for Biological Diversity, which has been battling to get Mr. Bundy to move his cattle in deference to the tortoises, said the standoff had come to symbolize divisions across the country about the role of government, particularly here in the West.

“It’s symbolic of the polarization and divide within the country that we saw starting with the Obama election,” he said. “This is merely a surrogate for bigger issue and topic in America today — it’s the whole idea of federalism versus states.”

The federal government owns 85 percent of the land in Nevada, a statistic repeatedly noted by Mr. Bundy’s supporters as they denounced the actions of the government. Six cattle, including two that had Bundy brands, died during the attempt to collect the animals.

“Western states don’t have the control over their land that Eastern states have over their land,” said Ivan Jones, 60, a brick mason who came here from Northern California. “Someone like the Bundys, they have been here for generations, before the B.L.M. was ever created, using this land to graze their animals. And the B.L.M. comes in and changes the rule. A small little rancher trying to make a living and they come in like big bullies.”

“This is happening all over the country right now,” he said. 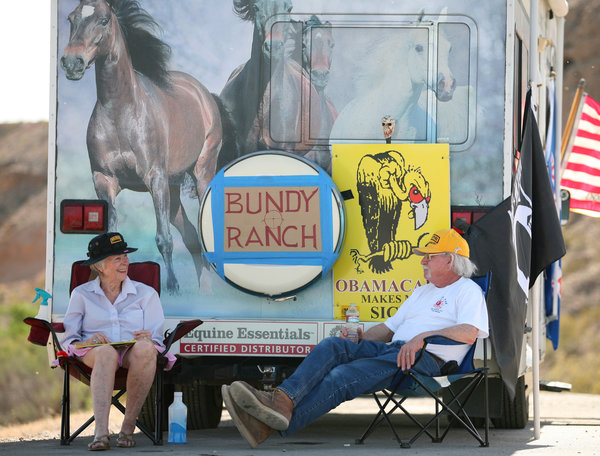 Sympathizers have embraced Mr. Bundy as a symbol of their anger and a bulwark against federal abuse.CreditRonda Churchill for The New York Times

Mr. Bundy’s case is clearly divisive. About 16,000 ranchers across the country pay relatively modest fees for their herds to use public land. The Nevada Cattlemen’s Association, while expressing sympathy with some of Mr. Bundy’s complaints, pointedly did not endorse his methods.

“This should not be confused with civil disobedience,” Mr. Mrowka said. “This is outright anarchy going on here.”

Mr. Bundy disputes the legitimacy of both the bureau and the courts that have ruled against him. “I’ll be damned if I’m going to honor a federal court that has no jurisdiction or authority or arresting power over we the people,” he said.

Still, as Mr. Bundy surveyed the dusty landscape last weekend, the only sign of law enforcement was Brad Rogers, the sheriff of Elkhart County, Ind., who had flown 1,800 miles to stand in solidarity with the embattled rancher. 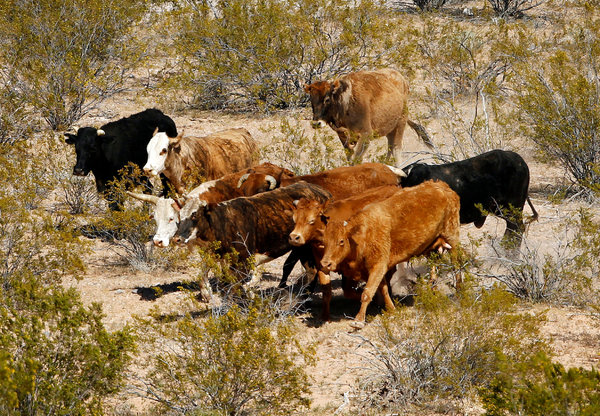 The standoff over cattle grazing has highlighted divisions over Washington and its sprawling ownership of Western land. CreditJohn Locher/Las Vegas Review-Journal, via Associated Press

With the rangers gone, “I don’t feel any threat — that’s a big change,” Mr. Bundy said. At the same time, he said he saw no reason for his supporters to leave. “As long as we are getting together as a group and as long as we feel good about being here, we are going to be here,” he said.

One of Mr. Bundy’s sons, Ammon, 38, a car fleet manager from Phoenix, said his father had taught the federal government a lesson. “We ran them out of here,” he said, sitting in a trailer set up near one of the protesters’ camp sites. “We were serious. We weren’t playing around.”

But Alan O’Neill, who had a similar struggle with Mr. Bundy when he was superintendent of the Lake Mead National Recreation Area, expressed concern that the government had backed down.

“He calls himself a patriot, and says he loves America,” Mr. O’Neill said. “And yet he says he won’t follow any federal laws. You just can’t let this go by, or everybody is going to be like, ‘If Bundy can break the law, why can’t I?’ ”