By DAILY MAIL REPORTER
PUBLISHED: 12:59 EST, 30 March 2013 | UPDATED: 13:02 EST, 30 March 2013
A Confederate battle flag hanging inside the old North Carolina State Capitol to mark the sesquicentennial of the Civil War last week is being taken down after upset by civil rights leaders.

The decision was announced hours after a story ran about the flag that explained it as part of an historical display intended to replicate how the antebellum building appeared in 1863.

The flag had been planned to hang in the House chamber until April 2015, the 150th anniversary of the arrival of federal troops in Raleigh before its forced removal. 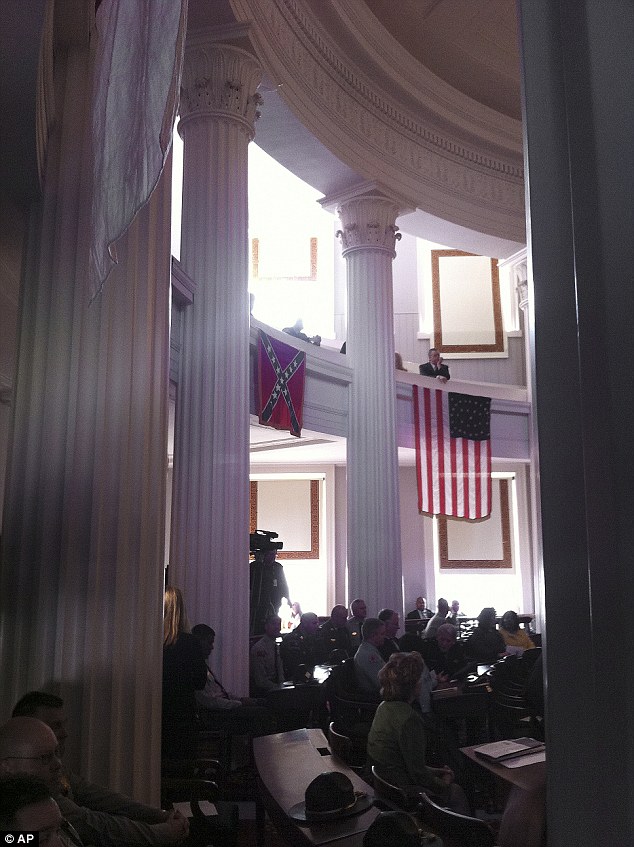 Removed: A Confederate flag is seen on display at the Old Capitol, which houses the governor’s office and still hosts numerous government events, making it therefore inappropriate for its hanging according to some

‘This is a temporary exhibit in an historic site, but I’ve learned the governor’s administration is going to use the old House chamber as working space,’ Cultural Resources Secretary Susan Kluttz said on Friday night. ‘Given that information, this display will end this weekend rather than April of 2015.’

Kim Genardo, the spokeswoman for Gov. Pat McCrory, said the exhibit that includes the Confederate battle flag will be relocated, possibly across the street to the N.C. Museum of History.

The decision was a quick about-face for the McCrory administration, which initially defended the display.

But many people see the flag as a potent reminder of racial discrimination and bigotry, calling it a flag of white supremacy.
State Historic Sites Director Keith Hardison had said on Thursday the flag should be viewed in what he called the proper historical context.

‘Our goal is not to create issues,’ said Hardison, a Civil War re-enactor and history buff. ‘Our goal is to help people understand issues of the past. … If you refuse to put something that someone might object to or have a concern with in the exhibit, then you are basically censoring history.’ 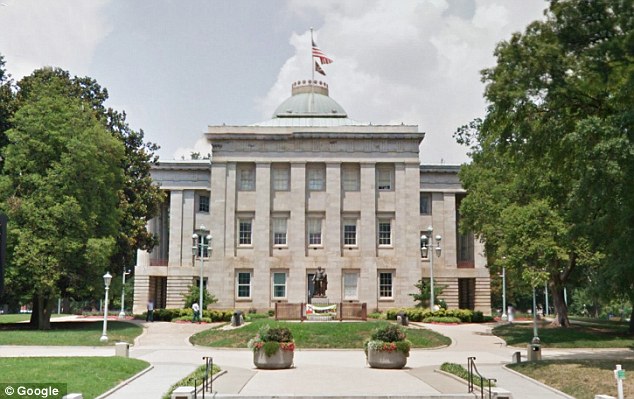 Reflection: The flag is being taken down one week after its placement inside the capitol as part of a historical display intended to replicate how the antebellum building appeared in 1863

North Carolina NAACP president Rev. William Barber was shocked on Friday when he was shown a photo of the flag by the AP.
‘He is right that it has a historical context,’ Barber said. ‘But what is that history? The history of racism. The history of lynchings. The history of death. The history of slavery. If you say that shouldn’t be offensive, then either you don’t know the history, or you are denying the history.’

Sessions of the General Assembly moved to a newer building a half-century ago, but the old Capitol building is still routinely used as a venue for official state government events. McCrory’s office is on the first floor, as are the offices of his chief of staff and communications staff.

The Republican governor was in the House chamber where the Confederate flag hangs as recently as Thursday, when he presided over the swearing-in ceremony of his new Highway Patrol commander.
The presentation of the Confederate battle flag at state government buildings has long been an issue of debate throughout the South. For more than a decade, the NAACP has urged its members to boycott South Carolina because of that state’s display of the flag on the State House grounds. 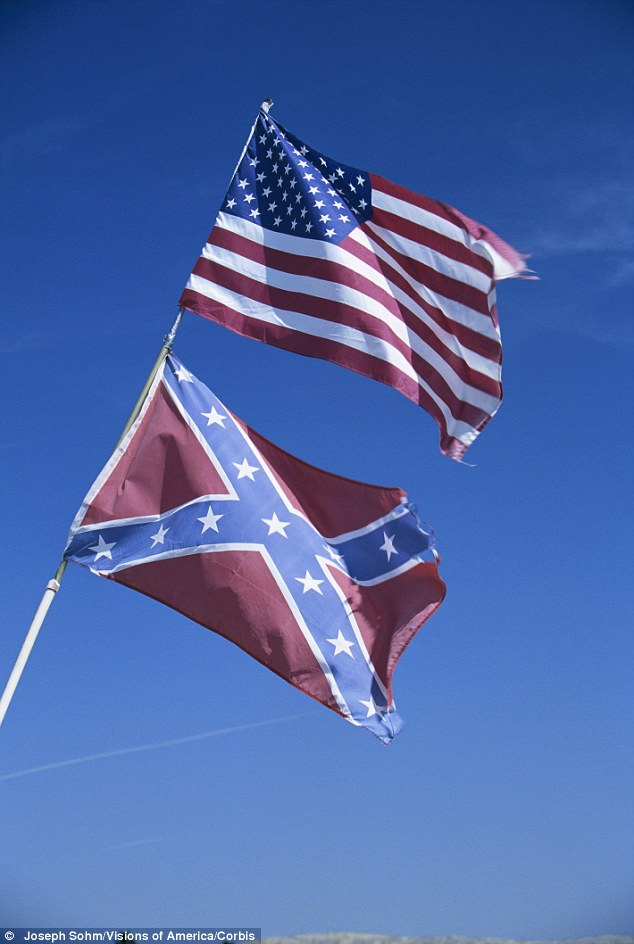 Battle flag: Many people see the flag, the Confederacy’s battle flag seen waving below the United States’, as a potent reminder of racial discrimination and bigotry, calling it a flag of white supremacy

Prior to taking his current job in North Carolina in 2006, Hardison worked as director at the Mississippi home of Confederate President Jefferson Davis, which is operated as a museum and library owned by the Sons of Confederate Veterans.

The group has led the fight in the South for the proud display of the Confederate flag, which it contends is a symbol of heritage, not hate.

Hardison said the battle flag was displayed with other flags described in the diary of a North Carolina woman who visited the Capitol in 1863. A large U.S. flag displayed in the Senate chamber is reminiscent of a trophy of war captured from Union troops at the Battle of Plymouth.

‘I thought, wouldn’t it be wonderful to recreate this?’ Hardison said. ‘I think we were all thinking along the same vein. … The Capitol is both a working seat of government, in that the governor and his staff has his office there. But it is also a museum.’
Hardison pointed out that the national flag used by the Confederate government, with its circle of white stars and red and white stripes, is still flown over the State Capitol dome each year on Confederate Memorial Day. The more familiar blood-red battle flag, featuring a blue ‘X” studded with white stars, was used by the rebel military. 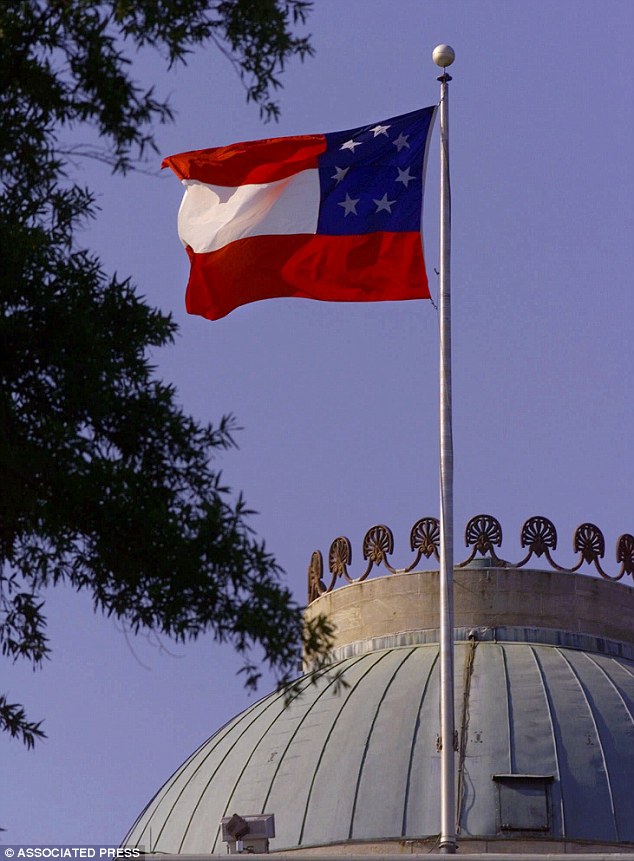 David Goldfield, a history professor at the University of North Carolina at Charlotte and author of the book ‘Still Fighting the Civil War,’ said the battle flag can hold starkly different meanings depending on a person’s social perspective.

‘The history of the Confederate battle flag, how it was designed and formulated, how it has been used through the years, clearly states that it is a flag of white supremacy,’ Goldfield said.

‘I know current Sons of Confederate Veterans would dispute that, saying “Hey, I’m not a racist.” But the fact remains that the battle flag was used by a country that had as its foundation the protection and extension of human bondage.’

The NAACP’s Barber said the McCrory administration eventually made the right call, but questioned how the decision to hang the flag was made in the first place.

‘A flag should represent a banner of unity, not division,’ Barber said. ‘A substantive symbol and sign of our best history, not our worse. We cannot deny history but neither can we attempt to revision it in a way that glorifies the shameful and attempts to make noble that which is ignoble.’
Read more: http://www.dailymail.co.uk/news/article-2301585/Confederate-flag-stripped-North-Carolina-capitols-historical-exhibit-following-outcry-civil-rights-leaders.html#ixzz2P541o4Mo