Early in the summer of 1862, Abraham Lincoln carved out time to sit quietly and craft the principles of the Emancipation Proclamation. He would reveal his plan to the cabinet on July 22, and announce it to the world on Sept. 22, after the Battle of Antietam. In those long, early days of summer, however, he told no one of his plan. 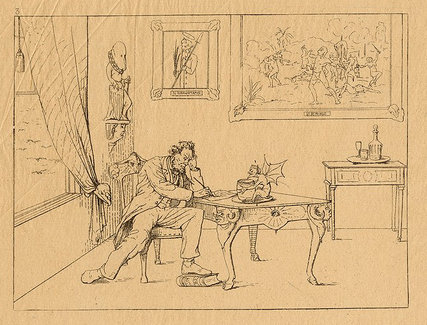 Library of CongressLincoln composing the Emancipation Proclamation, by Adalbert Volck

But he must have discussed it with a devil.

That was the conclusion of Adalbert Johann Volck, the most incisive Confederate political satirist. And he drew the proof: President Lincoln, hand to his head, deep in thought, a portrait of John Brown with a halo hanging nearby, the Constitution underfoot and a painting of the bloody Haitian slave revolt on the wall. And, of course, an impish little demon helpfully holding the president’s inkwell.

Volck was hardly a typical pro-Southern, anti-Lincoln propagandist. Like many of his fellow German-Americans, he had left his native land because of his involvement in the revolution of 1848. After a few years in St. Louis and California he settled in Baltimore, where he worked as a dentist. He became politically active, and, like the renowned Thomas Nast and Joseph Keppler (founder of Puck), he expressed his views in biting political cartoons.

But unlike so many German-Americans, who sided overwhelmingly with the Union, Volck decided to use his skills to promote the Confederacy. And he did so mercilessly, under a pseudonym, V. Blada—a reversal of part of his first name and last initial.

Volck was less a proponent of slavery and the South than a critic of the North. He attacked the central tenets of the Republican Party and the Union cause of national reunification. A few decades before a Republican Party stalwart sought to paint the Democratic Party as built upon “rum, Romanism and rebellion,” Volck saw Lincoln’s party as a bacchanalia, where America was being sacrificed upon the party’s altar dedicated to atheism, rationalism, free love and “Negro Worship.” In one etching he depicted the president’s face on a throne atop which sits a satirically deified African-American, while many of the Union’s military and political leaders stand around in witness. In the background stands a devil-horned statue of John Brown, and above it all hangs the word “ego.” 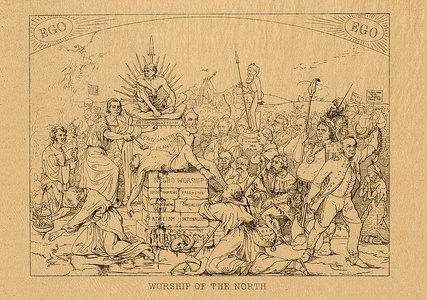 Library of Congress“Worship of the North,” by Adalbert Volck

Such merciless caricature would surely have landed Volck in trouble — had the Union authorities of Maryland known of his work. Volck worked secretly in his office, after business hours, and his “Sketches From the Civil War in North America” were produced and distributed around Baltimore on the sly to a trusted circle of Confederate sympathizers.

Volck’s engravings celebrated the military success of the Confederacy and the deep religious reverence of its military leaders, and he tried to rewrite the master-slave relationship by depicting faithful servants who gladly hid their masters from Union soldiers. In the North, in Volck’s images, African-Americans lay destitute, begging in the streets, offered only an abolitionist pamphlet, rather than food. And German-American Union soldiers were shown plundering a Confederate home, with little regard for a woman begging for mercy.

Volck also engaged, polemically, with other artists. While another German-American, the painter Emanuel Leutze, completed his work in the Capitol, demonstrating the links between the promise of the American West and the ultimate success of the Union, Volck prepared a response to Leutze’s earlier masterpiece “Washington Crossing the Delaware.”

Completing the painting in 1851, Leutze had focused on the heroism and leadership of Washington, fighting for independence from the increasingly tyrannical British Empire. He imbued it with connections to both the American success in creating a transcontinental territory in the Mexican War and the failed European democratic revolutions of 1848. By having Washington stand in the wobbly rowboat, and by turning Washington’s troops to face left and presumably west, Leutze suggested the renewal of hope for those refugees and patriots who could cross the Atlantic and then Mississippi River to seek the best hope for the Union in the West in the mid-19th century. 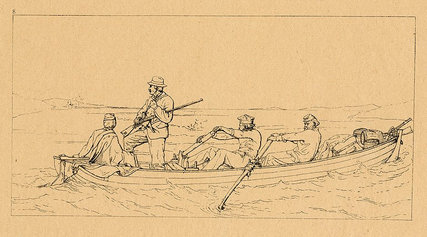 Library of Congress“Marylanders Crossing the Potomac to Join the Southern Army,” by Adalbert Volck

But the St. Louis surgeon Joseph McDowell would have none of it. His father had served alongside Washington and crossed the Delaware River that Christmas Eve in 1776, he explained in an open letter to Henry Ward Beecher in 1859, and McDowell had not forgotten that it was German-speaking contract soldiers whom Washington went to fight. Like many Confederate sympathizers, McDowell believed the South held best to the ideals of the American Revolution, and the Republican Party had corrupted the North. “There still lives the same love of liberty in my bosom that impelled them to battle and to cross the Delaware,” he declared, “and would impel me to cross the Mississippi to battle the foes of this Union.” A German doctor and botanist in St. Louis, George Engelmann, agreed: “In spite of all the great principles trumpeted it is a horrible war of suppression,” he wrote, joining McDowell in thinking how to undermine the Union cause.

Volck expressed his response in deeds and in an engraving. He used his connections in Baltimore to obtain medicines to smuggle into the Confederacy, and his etching of “Marylanders Crossing the Potomac to Join the Southern Army” distinctly mirrors — and reverses — Leutze’s image. Here, the leader follows after Washington and stands confidently as his sailors row the boat to safety, out of the range of Union cannon, and on to join the Confederacy.

Volck didn’t publish engravings in his own name until after the war. In 1875, Lippincott’s Magazine published his story “Mose Underwood,” a western adventure story of a “renowned hunter” with “a cabin, at some distance in the wilderness.” On Jan. 11, 1905, Volck wrote to the Library of Congress to explain the manner of the caricatures’ production and distribution — and how, “after the deplorable murder of Lincoln,” he regretted having “aimed ridicule at that great and good” man. But he still argued “that the pictures represent events as truthfully as my close connection with the South enabled me to get at them.”

Volck’s sketches are the subject of a Civil War Sesquicentennial exhibit at the National Portrait Gallery through January 2013.