Lecture and presentation from New Orleans Jazz and Heritage Festival, 2011:

Congo Square is an open space within Louis Armstrong Park, which is located in the Tremé neighborhood of New Orleans, Louisiana, just across Rampart Street north of the French Quarter. The Tremé neighborhood is famous for its history ofAfrican American music.
In Louisiana’s French and Spanish colonial era of the 18th century,slaves were commonly allowed Sundays off from their work. They were allowed to gather in the “Place de Negres”, “Place Publique”, later “Circus Square” or informally “Place Congo”  at the “back of town” (acrossRampart Street from the French Quarter), where the slaves would set up a market, sing, dance, and play music.
The tradition continued after the city became part of the United States with the Louisiana Purchase. As African music had been suppressed in the Protestant colonies and states, the weekly gatherings at Congo Square became a famous site for visitors from elsewhere in the U.S. In addition, because of the immigration of refugees (some bringing slaves) from the Haitian Revolution, New Orleans received thousands of additional Africans and Creoles in the early years of 19th century. They reinforced African traditions in the city, in music as in other areas. Many visitors were amazed at the African-style dancing and music. Observers heard the beat of the bamboulas and wail of the banzas, and saw the multitude of African dances that had survived through the years. 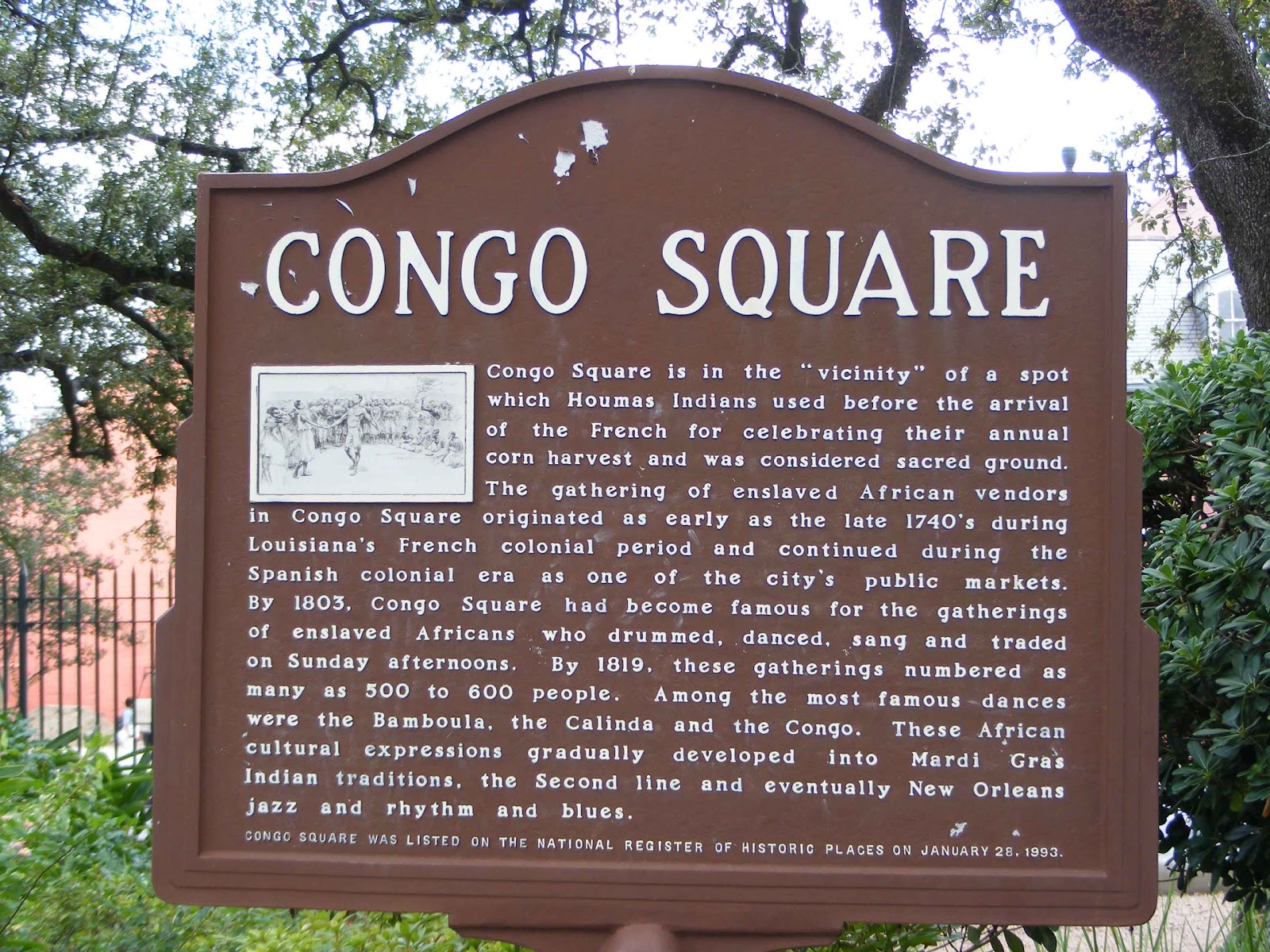 Townsfolk would gather around the square on Sunday afternoons to watch the dancing. In 1819, the architect Benjamin Latrobe, a visitor to the city, wrote about the celebrations in his journal. Although he found them “savage”,  he was amazed at the sight of 500-600 unsupervised slaves who assembled for dancing. He described them as ornamented with a number of tails of the smaller wild beasts, with fringes, ribbons, little bells, and shells and balls, jingling and flirting about the performers’ legs and arms. The women, one onlooker reported, wore, each according to her means, the newest fashions in silk, gauze, muslin, and percale dresses. The males covered themselves in oriental and Indian dress and covered themselves only with a sash of the same sort wrapped around the body. Except for that, they went naked.
One witness noted that clusters of onlookers, musicians, and dancers represented tribal groupings, with each nation taking their place in different parts of the square. The musicians used a range of instruments from available cultures: drums, gourds, banjo-like instruments, and quillpipes made from reeds strung together like pan flutes, as well as marimbas and European instruments such as theviolin, tambourines, and triangles.
White Creole composer Louis Moreau Gottschalk incorporated rhythms and tunes he heard in Congo Square into some of his compositions, like his famous Bamboula, Op. 2.
As harsher United States practices of slavery replaced the more lenient French colonial style, the slave gatherings declined. Although no recorded date of the last slave dances in the square exists, the practice seems to have stopped more than a decade before the end of slavery with the American Civil War.

Dance in Congo Square in the late 1700s, artist’s conception by E. W. Kemble from a century later

In the late 19th century, the square again became a famous musical venue, this time for a series of brass band concerts by orchestras of the area’s “Creole of color” community. Toward the end of the century, the city of New Orleans officially renamed the square as “Beauregard Square” in honor of Confederate General P.G.T. Beauregard. While this name appeared on some maps, most locals continued to call it “Congo Square”. In 2011, the New Orleans City Council officially voted to restore the traditional name Congo Square.
In the 1920s New Orleans Municipal Auditorium was built in an area just in back of the Square, displacing and disrupting some of the Tremé community.
In the 1960s a controversial urban renewal project leveled a substantial portion of the Tremé neighborhood around the Square. After a decade of debate over the land, the City turned it into Louis Armstrong Park, which incorporates old Congo Square.
Starting in 1970, the City organized the New Orleans Jazz & Heritage Festival and held events annually at Congo Square. As attendance grew, the city moved the festival to the much larger New Orleans Fairgrounds. In the late 20th century and early 21st century, Congo Square has continued to be an important venue for music festivals and a community gathering place for brass band parades, protest marches, and drum circles.

Among classical composers, in addition to Gottschalk, Congo Square was made the subject of a symphonic poem by Henry F. Gilbert, The Dance in Place Congo (1908), which was also staged as a ballet at theMetropolitan Opera in New York in 1918. He was inspired by an 1896 essay of the same name by George W. Cable which included extracts of the music to be heard in the Square.
The history of Congo Square inspired later generations of New Orleanians. Johnny Wiggs wrote and recorded a piece called “Congo Square” early in the New Orleans jazz revival, which became the theme song for the New Orleans Jazz Club radio show.
“Congo Square” Jazz Saxophonist Donald Harrison is the Big Chief of The Congo Nation Afro-New Orleans Cultural group which represents Congo Square in New Orleans culture. His father, Donald Harrison, Sr. was the Big Chief of four tribes and passed down the secret rituals and drum patterns of Congo Square to him. Harrison says, “That our culture is different than African culture but it has direct links to it. You have to start in New Orleans to understand it.” His CD’s, “Spirits of Congo Square,” recorded in 2002 and, “Indian Blues,” recorded in 1991 incorporate his concept of the swing beat merged with the Afro-New Orleans rhythms of Congo Square have influenced many jazz musicians.
Congo Square is also the title of an African-themed jazz score byWynton Marsalis and Yacub Addy. It consists of swing arrangements for big band as well as traditional African drum and vocal ensemble from Ghana. Another famous version is that of Louisiana slide guitaristSonny Landreth on the 1985 album Down in Louisiana. The Americanhard rock act Great White released a song called “Congo Square” on their 1991 release Hooked.
Younger generation neo soul artist Amel Larrieux also wrote a song based on the Congo Square called “Congo” on her 2004 albumBravebird.
R&B songstress Teena Marie’s new album is entitled Congo Square, released on June 9, 2009.

How far have we really come since civil rights movement?