PARIS — The International Criminal Court in The Hague said Tuesday that it found testimony against a former rebel leader “too contradictory and too hazy” to convict him of a gruesome 2003 attack on a village in the Democratic Republic of Congo in which some 200 people were hacked to death and female survivors were raped and held in camps as sex slaves.
The acquittal of the leader, Mathieu Ngudjolo, was only the second verdict issued by the court since it opened its doors a decade ago. It drew harsh criticism from rights groups, who faulted prosecutors for not assembling a stronger case.
The trial had been tightly focused on the events of Feb. 24, 2003, in the eastern Congolese village of Bogoro. Prosecutors said the attackers used machetes to preserve bullets and burned some civilians alive.
In their ruling, the judges said that they did not question that the villagers had suffered atrocities but that there was not enough evidence to convict Mr. Ngudjolo of murder, rape and using child soldiers.
“This does not necessarily mean that the alleged fact did not occur,” the presiding judge, Bruno Cotte of France, said of the prosecutors’ failure to prove the charges beyond a reasonable doubt. 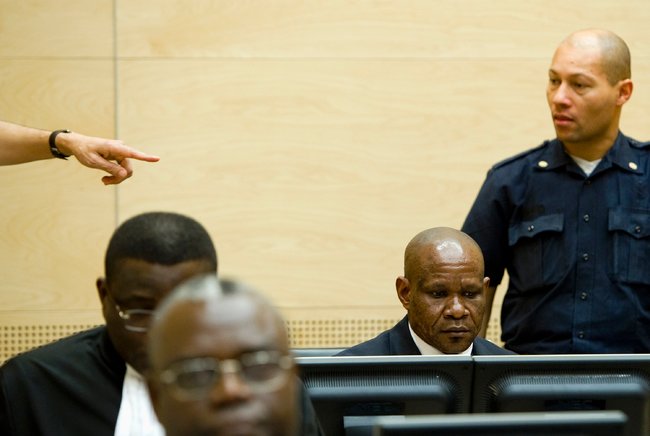 The acquittal of the Congolese leader, Mathieu Ngudjolo, seated right, was only the second verdict issued by the court since it opened its doors a decade ago.

André Kito, a coordinator of Congolese rights groups, said the verdict was “a hard blow for the victims and affected communities.” He added that people in the region had placed much hope in getting justice from the court after enduring years of terror at the hands of militia fighters jockeying for control of mineral-rich areas.
The court has indicted suspects in seven African countries. Tuesday’s verdict was the second case in which prosecutors faced criticism for their handling of a case from the Ituri region of Congo.
Another Congolese rebel leader, Thomas Lubanga, was sentenced to 14 years in prison in July after being convicted of recruiting child soldiers in Ituri. That verdict followed a troubled trial that was halted twice as judges and prosecutors wrestled over the nature of the evidence.
After Mr. Ngudjolo was acquitted Tuesday, prosecutors asked the judges to keep Mr. Ngudjolo in detention, saying they intended to appeal the verdict.
Human Rights Watch called Tuesday for the court’s prosecutor to investigate the leaders behind the bloodshed. “The I.C.C. prosecutor needs to strengthen its investigations of those responsible for grave crimes in Ituri, including high-ranking officials in Congo, Rwanda and Uganda who supported the armed groups,” said Geraldine Mattioli-Zeltner, an advocacy director of the rights group.
Mr. Ngudjolo, who had pleaded not guilty, showed no emotion when the verdict was read. The court had been criticized for spending significant sums for Mr. Ngudjolo’s wife and six children to visit him during his confinement.
Mr. Ngudjolo, 42, a former nurse, was arrested in 2008 in the Congolese capital, Kinshasa, accused of crimes that took place while he was chief of staff for the Front for National Integration, an armed militia that was made up mostly of fighters from the Lendu ethnic group. He was put on trial with Germain Katanga, who led an allied militia also accused of participating in the attack on Bogoro.
Mr. Katanga’s trial will continue.