By HILLEL KUTTLER         Published: April 14, 2013
When the mayor of Cooperstown, N.Y., Jeff Katz, searched for an appropriate street to dedicate in Bud Fowler’s memory, he decided on one that led to Doubleday Field, the quaint brick stadium a baseball’s throw from the Hall of Fame. An old survey of the village indicated that the street had not been named, Katz said.
Like the street itself, Fowler had gone largely unnoticed, despite being the first African-American known to have played for a white professional baseball team. That happened when Fowler pitched for the Lynn, Mass., Live Oaks of the International Association in 1878.
He played 10 seasons and batted .308 as a pitcher, catcher and second baseman for integrated teams in the high levels of the minor leagues. Fowler played for teams in 21 states and territories, as well as in Canada, said Jeff Laing, whose biography of Fowler will be published in June.
The dedication of Bud Fowler Way on Saturday comes the same week as Monday’s anniversary of Jackie Robinson’s debut with the Brooklyn Dodgers in 1947, when all major leaguers will wear Robinson’s No. 42.
Laing and others who have studied Fowler’s life hope that the dedication will encourage baseball fans to learn about his legacy as a trailblazing player and, later in his career, as an organizer, entrepreneur and marketer of African-American teams.The street naming will “raise the profile of the Negro leagues and black baseball in general,” said Bobby Kendrick, the president of the Negro Leagues Baseball Museum in Kansas City, Mo. 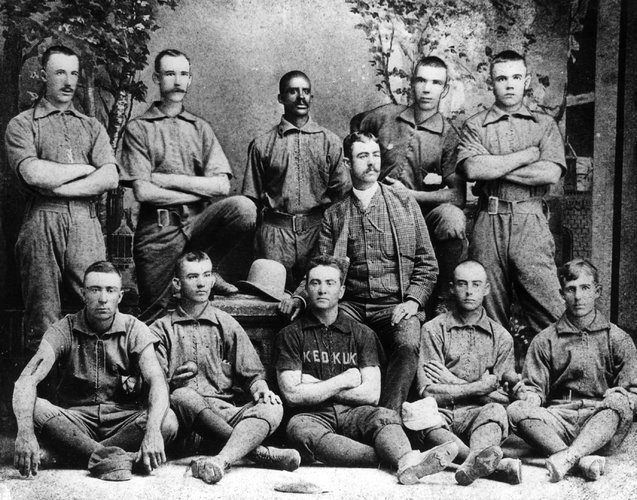 National Baseball Hall of Fame Library——-Bud Fowler, in the middle of the back row, with his Keokuk teammates in 1885. This is one of two known images of Fowler.

“And Bud Fowler is a key figure not only in black baseball but also baseball history over all,” Kendrick said.
Kendrick spoke from the museum last week before heading to the premiere of “42,” the feature film about Robinson.
Some baseball historians believe that Fowler deserves acclaim — and should join Robinson as a member of the Hall of Fame — for his record and for prevailing in the face of consistent discrimination. Several white teams forced Fowler off their rosters, sometimes before he had even played a game.
“Even though he never played major league baseball, he deserves to be in as a pioneer of baseball,” Laing said.
The spotlight now on Fowler coincides with the recent centennial of his death on Feb. 26, 1913, in Frankfort, N.Y. An annual conference on 19th-century baseball that the Society for American Baseball Research will hold at the Hall of Fame this weekend will include the presentation of a paper on Fowler by Hugh MacDougall, the Cooperstown historian. He researched Fowler because Fowler grew up there, under the name John W. Jackson.
While Robinson is considered to have broken baseball’s color barrier, the first black player on a major league team was Moses Fleetwood Walker, a catcher with the Toledo Blue Stockings of the American Association in 1884. The legacies of Robinson, Walker and Fowler are intertwined.
The so-called gentlemen’s agreement among team owners in 1887 — which barred blacks from playing on white pro clubs, until Branch Rickey signed Robinson to a contract in 1945 — can be traced to Fowler. Playing for the Binghamton, N.Y., Bingos in 1887, he was second in batting average in the International Association when the team released him, ostensibly so he could join an all-black team, Laing said.
Newspaper reports subsequently revealed that Fowler’s white teammates had threatened to strike over his presence on the Bingos, and the association decided after the season to refrain from signing other black players and from re-signing those already under contract, Laing said. The two major leagues — the American Association and the National League — soon followed suit.
“I think the reason they did it was they thought that blacks were more trouble than they were worth,” Laing said.
Fowler would play through 1895 with integrated teams in leagues that did not adhere to the ban. He also played for all-black teams, attempted to organize an all-black league in Texas and even formed a business-sponsored team, the Page Fence Giants, in Michigan in 1895. The players traveled in parlor cars, and at each destination, they mounted bicycles to lead bystanders on a parade to the ballpark, MacDougall wrote in his paper.
Much of Fowler’s life, including his reasons for adopting a new name, is shrouded in mystery. What is known comes from newspaper accounts of the day, because Fowler left behind no letters, diaries or other papers. He did not marry or have children; his sister, Harriet, in whose home Fowler died, was also childless, and no family have been located. Only two images of Fowler are known to exist; both are photographs of him with his teammates.
He died in poverty, and his grave in Frankfort’s Oak View Cemetery was unmarked until 1987, when a committee with the Society for American Baseball Research sponsored a memorial stone and held a dedication ceremony there.
The ceremony in Cooperstown on Saturday will, in its own way, help to bring Fowler’s legacy back to life.

Many American’s in the 1860’s moved to Haiti, and used Haitian Revolution as inspiration