A Chicago police officer has been caught on tape unfairly arresting journalists who were filming on public property – despite this being a right under the First Amendment.

The case is the latest example of police denying citizens their right to film or take photos of public disputes, according to civil rights groups, something which was been on the rise since half of all Americans now carry smartphones with inbuilt cameras.

The footage shows an angry Chicago cop shouting ‘your first amendment rights can be terminated’ at an NBC News photographer who was taking pictures outside a public hospital, before handcuffing the man and leading him away. 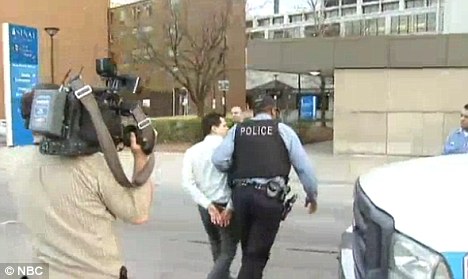 Arrest: A Chicago police officer, pictured, has been caught on tape unfairly arresting an NBC photographer

The journalist was later released but the National Press Photographers Association says this is one of at least 70 unfair arrests documented since September, according to Msnbc.

America’s bill of rights allows anyone in a public space, not just a journalist or a professional photographer, to record things they see in plain sight and courts have repeatedly upheld that right in high-profile cases.

‘The first amendment has come under assault on the streets of America,’ they wrote in a May letter, also signed by six other organisations.

‘Police have arrested dozens of journalists and activists simply for attempting to document political protests in public spaces.’ 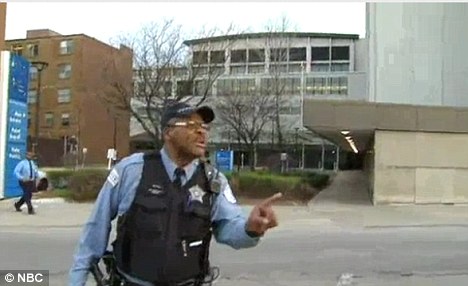 Untrue: The officer, pictured, is shown shouting that first amendment rights can be ‘terminated’

The groups say the ‘alarming’ number of arrests is ‘an unfortunate and unwarranted byproduct’ of the rise in smartphones with internal video cameras. But they vow to uphold the rights of citizens to record in public.

‘A new type of activism is taking hold around the world and here in the U.S. People with smartphones, cameras and internet connection have been empowered with the means to report on public events.

‘These developments have also created an urgent need for organizations such as ours to defend this new breed of activists and journalists and protect their right to record.’

Press photographers’ association lawyer Mickey Osterreicher told Msnbc he deals with new cases nearly every day of photographers who have been wrongly arrested. 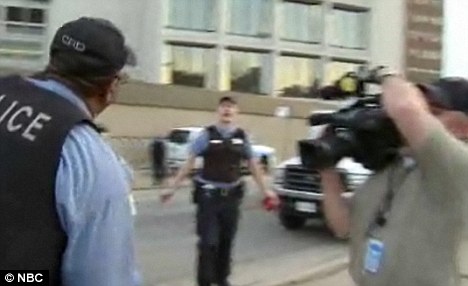 Free: Anyone on public property is free to film or take photos of events taking place in plain sight

‘It wouldn’t really matter with some police officers if you had an original copy of Bill of Rights with you,’ he said.

When a reporter denied making a scene, the cop retorts: ‘Your presence is making a scene’ and after arresting the NBC staffer, he adds ‘I told you to leave and you didn’t leave’.

In August 2011, the First U.S. Circuit Court of Appeals for the First Circuit ruled unanimously in favor of Simon Glik who was arrested and charged with violating wiretapping laws for filming police arresting a homeless man near Boston Commons four years earlier.

‘That decision is 24 pages of pure gold,’ Osterreicher said. 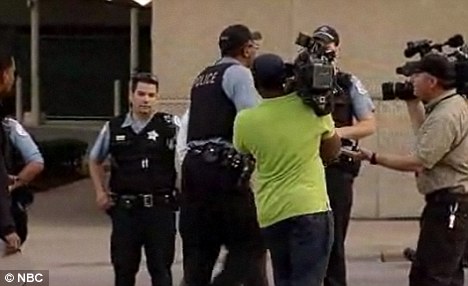 Agro: Civil rights groups say this is one of 70 unfair arrests that have been documented since September

‘It’s really not up to police officers to decide what is and isn’t newsworthy,’ Osterreicher said.

But not everyone has the time or money to battle the courts for five years, which is why the groups are urging Holder to defend the First Amendment rights.

‘We call on authorities at the local, state and federal level to stop their assault on people attempting to document protests and other events unfolding in public spaces,’ the letter concludes.

‘We must protect everyone’s right to record.’

Susie King Taylor: Army nurse and 1st black to teach openly in a school for former slaves in Georgia