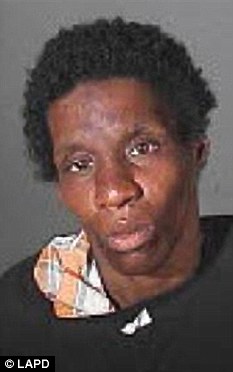 Rampage: Natasha Hubbard has been charged with aggravated assault

A deranged woman suddenly snatched an infant from a stroller, slammed the baby into a pole and later said she was trying to break the baby’s arm off ‘so she could eat it,’ Los Angeles police said on Wednesday.

They have released her photo believing she may have other victims from her wild rampage in downtown Los Angeles last Thursday.

The terrifying incident with the four-month-old boy took place in a crowded shopping district packed with families, police said.

Detectives said the mother, Adriana Miranda, 29, was pushing her infant son Alexander in his stroller when Hubbard unbelted the child and grabbed him by the leg, the New York Daily News reports.

Witnesses said Hubbard then swung the baby over her head and slammed him into a metal rail of a nearby truck as the distraught mother and the baby’s aunt watched in horror, police said.

The mother and aunt fought off the woman, with the suspect clawing at Miranda as she clutched the baby boy in her arms, police said.

Arriving officers were able to locate Hubbard with the help of witnesses who pointed her out.