By GLENN DAVID BRASHER
April 11, 2013, 12:30 pm
“Does it not behoove every colored man,” James Henry Gooding, a 26-year-old free black man from New Bedford, Mass., asked the readers of his hometown newspaper in March 1863, “to consider … whether he cannot be one of the glorious 54th?” New Bedford was a wealthy whaling town with a large abolitionist community, but one where many black citizens toiled in poverty. With such conditions likely in mind, Gooding believed that military service provided the key to African-American advancement. “There is more dignity in carrying a musket in defense of liberty and right,” he maintained, “than there is in shaving a man’s face, or waiting on somebody’s table.”
A month earlier, Gooding had enlisted in a new regiment designated the 54th Massachusetts Infantry, and hoped to inspire other recruits. “Our people must know that if they are ever to attain … any position in the civilized world,” he argued, “they must forgo comfort … and fight for it; make up their minds to become something more than the hewers of wood and drawers of water.”
Military service was a new opportunity for African-American men in early 1863. At the start of the war many blacks eagerly offered their services to the Union, but were rebuffed because of the prevailing racist assumption that they could not be good soldiers, and because most whites believed that blacks were not citizens and thus the nation was not theirs to defend. Yet the faltering military situation led many white Northerners to decide that it had become a military necessity to call on blacks, and in January 1863 Lincoln’s Emancipation Proclamation specifically encouraged their enlistment.
Gov. John Andrew of Massachusetts was determined that his state would produce the first African-American regiment raised in the North. As a radical abolitionist, he wanted to prove that black men would fight well for the country, entitling them to citizenship. “It is my design and hope,” he explained, “to make this a model regiment” and “it is my intention to make it the best.” 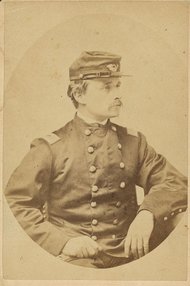