By ASHBY JONES and ARIAN CAMPO-FLORES   August 28, 2013, 8:33 p.m. ET
Five decades after marchers converged on Washington to hear the Martin Luther King Jr. deliver his “I Have A Dream” speech, African-Americans have made notable strides in areas such as educational attainment and civil and economic rights.
But one grim problem has become much worse: the extent to which violent crime touches African-American life.
While the overall U.S. murder rate fell over the past several years, the number of black male victims rose—many coming at the hands of black perpetrators. More than half of the nation’s homicide victims are African-American, though blacks make up only 14% of the population. And over the past 50 years, incarceration rates have risen for blacks, especially among men.
Such statistics present a troubling contrast to the gains made in other areas. Since the 1963 march, blacks have largely closed the gap with whites in high-school completion rates, with 86% of African-American adults having a high school diploma in 2012, compared with 92% of white adults, according to a Pew Research Center analysis of census data. 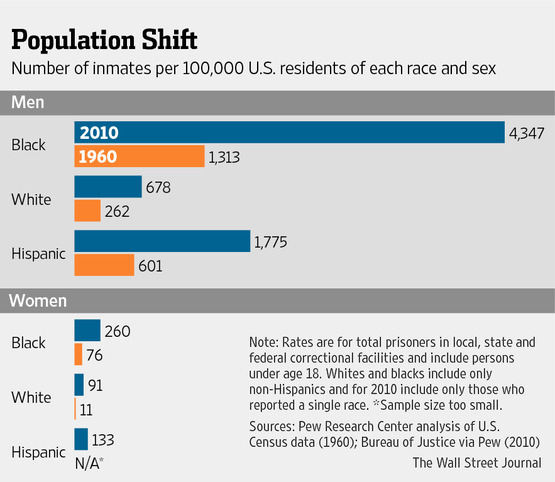 The percentage of black adults who obtained a bachelor’s degree hit 21% last year—about four times the rate of five decades earlier—but still trailing the 34% rate of whites, Pew said.
Equal-opportunity and affirmative-action programs opened up more jobs for African-Americans in corporations, public agencies and academia. New government programs to provide health coverage, housing and other assistance to the poor and elderly benefited blacks. And while blacks lag behind whites in life expectancy, the gap has narrowed significantly, thanks in part to improvements in medical care.
“There is no doubt that the ceiling has been lifted, that black people can occupy, and have occupied, virtually all the highest offices in our government and within the corporate ranks,” said Benjamin Todd Jealous, chief executive of the National Association for the Advancement of Colored People. “That’s significant because our children’s aspirations are able to rise proportionally.”
But police, political and community leaders are struggling to reduce violence—and in particular, the killings of young black men by other young black men—in poorer inner-city areas. The number of black male murder victims rose more than 10% from 2000 to 2010, to 5,942 from 5,307, according to an analysis of homicide data published by The Wall Street Journal last year.
The violence, coupled with a crackdown on drug crimes that has often involved mandatory sentences, led to a boom in incarceration rates for black men.
In 1960, 1,313 African-American men were incarcerated for every 100,000 black U.S. residents, according to the Pew analysis. By 2010, that number had climbed to 4,347. By contrast, the numbers for white men were 262 and 678, respectively.
While the rates of incarceration for blacks declined between 2000 and 2009, they remained significant.
In a speech Wednesday commemorating the march, President Barack Obama lamented such violence. “The shadow of poverty casts a pall over our youth, their lives a fortress of substandard schools and diminished prospects, inadequate health care and perennial violence,” he said.
He alluded to the role black communities must play in addressing the problem. “If we’re honest with ourselves, we’ll admit that during the course of 50 years, there were times when some of us, claiming to push for change, lost our way,” he said. “The anguish of assassinations set off self-defeating riots. Legitimate grievances against police brutality tipped into excuse-making for criminal behavior.”
In 2008, Richmond, Calif., implemented some ideas inspired by a program called Operation Ceasefire that has helped cut homicide rates in several U.S. cities through community interventions. It identified several dozen young black men in the city “most likely either to kill or be killed within six months,” said DeVone Boggan, Richmond’s neighborhood safety director.
“We sat down with all of them and explained that they were setting the city’s law-enforcement policies, that their violence was costing the city $600,000 a month,” said Mr. Boggan. “We told them that with their help, we could put that money elsewhere and could turn the city around.”
To Mr. Boggan’s surprise, the vast majority of the targeted men participated. The program assigned each of them a “caregiver,” helped connect them with jobs, gave them opportunities to take trips outside the city and gave some small stipends.
In the three-year period that ended in 2012, firearm-related homicides fell 45% and firearm-related assaults dropped 44% over the three year period that ended in 2009, he said.
“We’ve still got a lot to figure out in Richmond,” said Mr. Boggan. “But we’re miles ahead of where we were five years ago.”

10 most dangerous cities in America