New memoirs by an African woman that document her bizarre childhood living in exile in the secretive state of North Korea could shed new light on the totalitarian regime.
Monique Macias spent 15 years living in the capital Pyongyang, where her school days consisted of firing Kalashnikov rifles at the same prestigious military academy that heir apparent Kim Jong-il was educated.
Now in her 40s, Ms Macias said: ‘All my childhood memories start from when I arrived on that plane in Pyongyang. 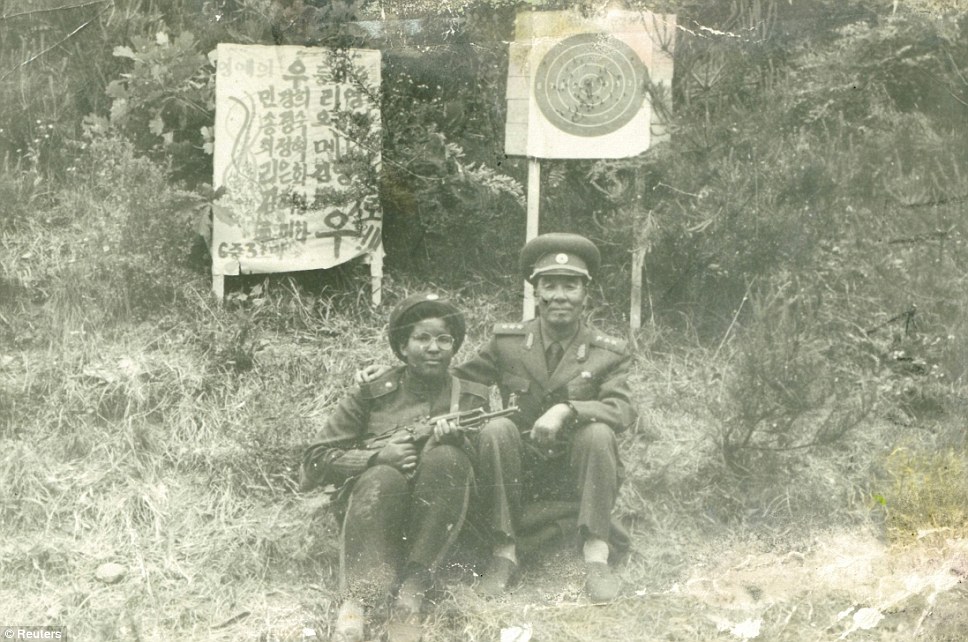 Schooldays: Monique Macias (left) poses with the headteacher of the Mangyongdae Revolutionary School after target practice on a camping trip in 1985 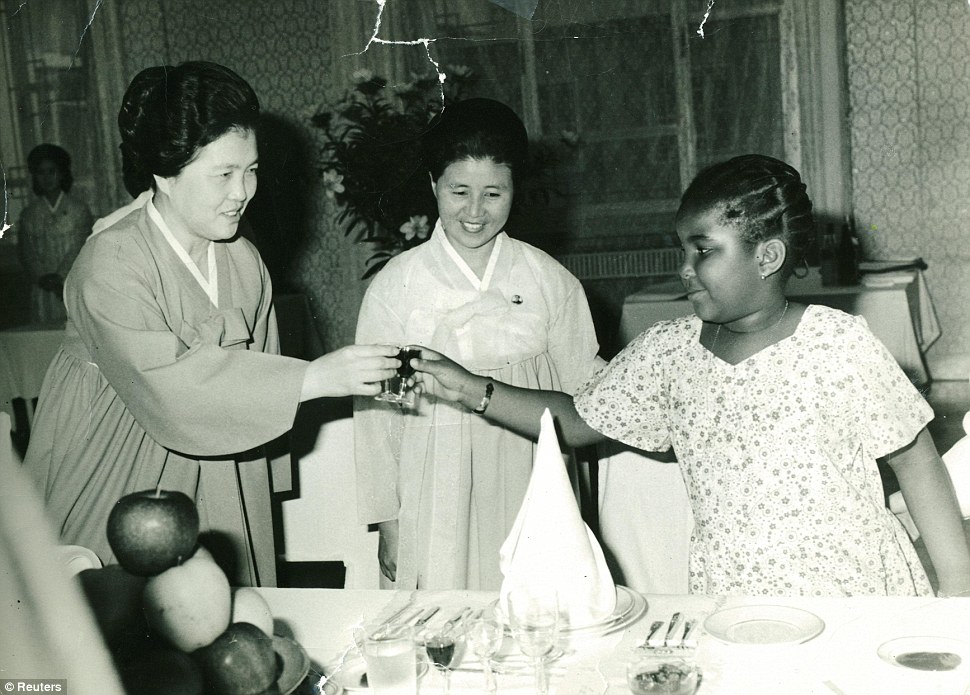 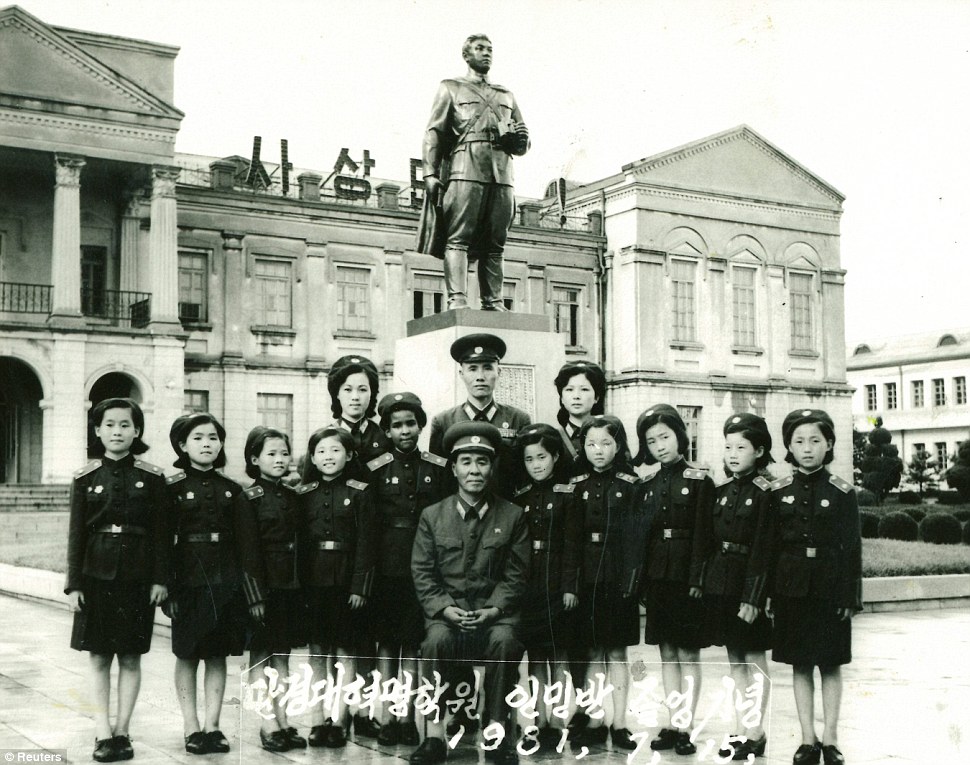 Classmates: Monique (fifth from the left) poses with fellow pupils of the Mangyongdae Revolutionary school during her primary school graduation in 1981 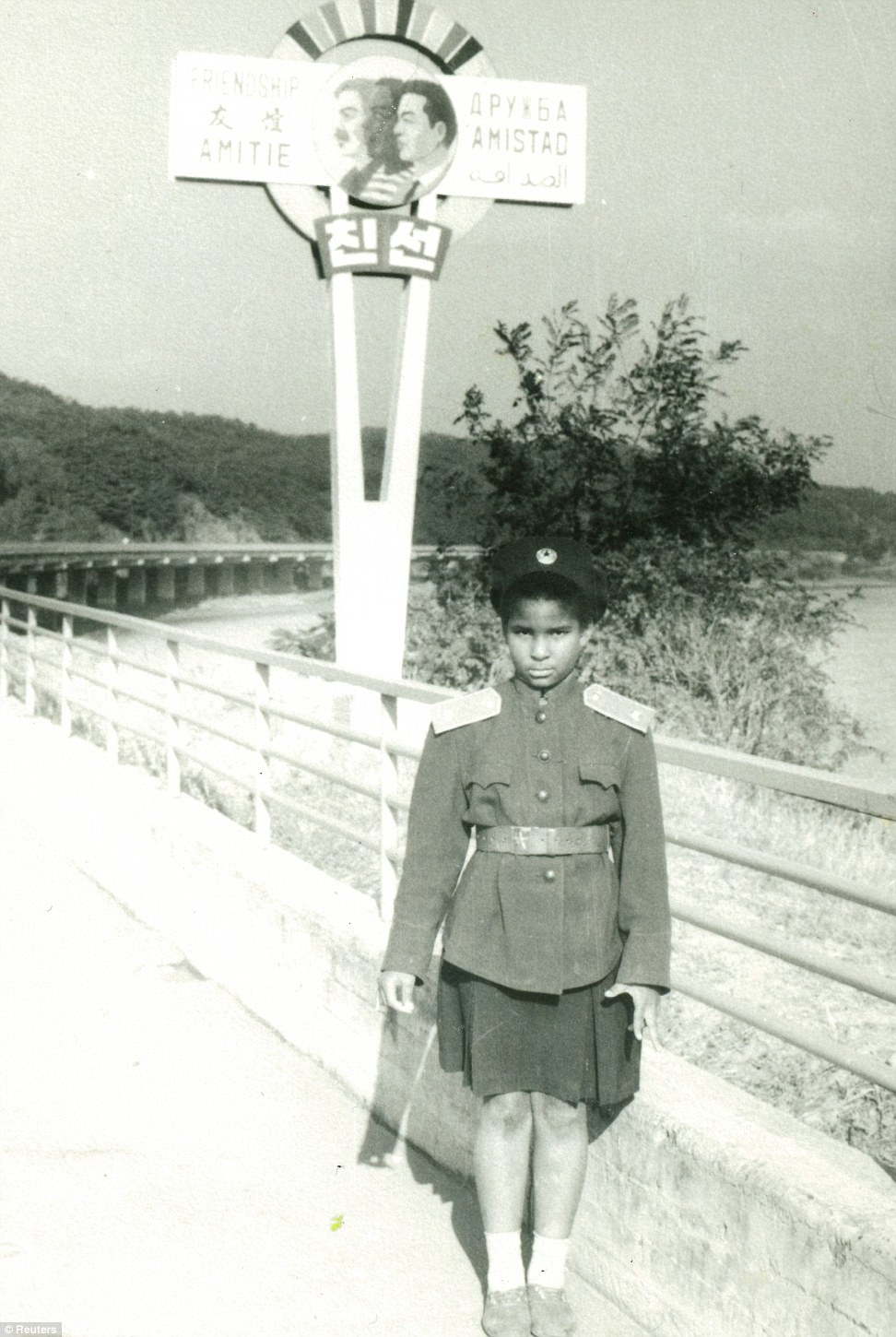 Capital: Monique Macias stands in front of a propaganda sign reading ‘Friendship’ on the Pyongyang-Nampho highway near her Pyongyang school in 1982

‘I know how Koreans think and how to talk to them because they taught me. They made me.’
Her memoirs ‘I’m Monique, From Pyongyang’ are written in Korean.
The youngest child of Francisco Macias Nguema, whose reign in Equatorial Guinea ended with his trial and execution in the late 1970s, the book charts her arrival and upbringing in the communist state.

Shortly before his death, and with few friends left, Macias Nguema turned to North Korea for help and sent his wife and children to Pyongyang, where they would spend the next 15 years.
The relationship between the two fringe states was not unusual in the Cold War tension of the time.
North Korea strived to build ties with smaller nations stuck on the periphery of the splits that pitted the United States and its allies against the Soviet Union, China and other communist countries.
Being one of very few black people in Pyongyang and living in a strange country taught Ms Macias to see the world differently. 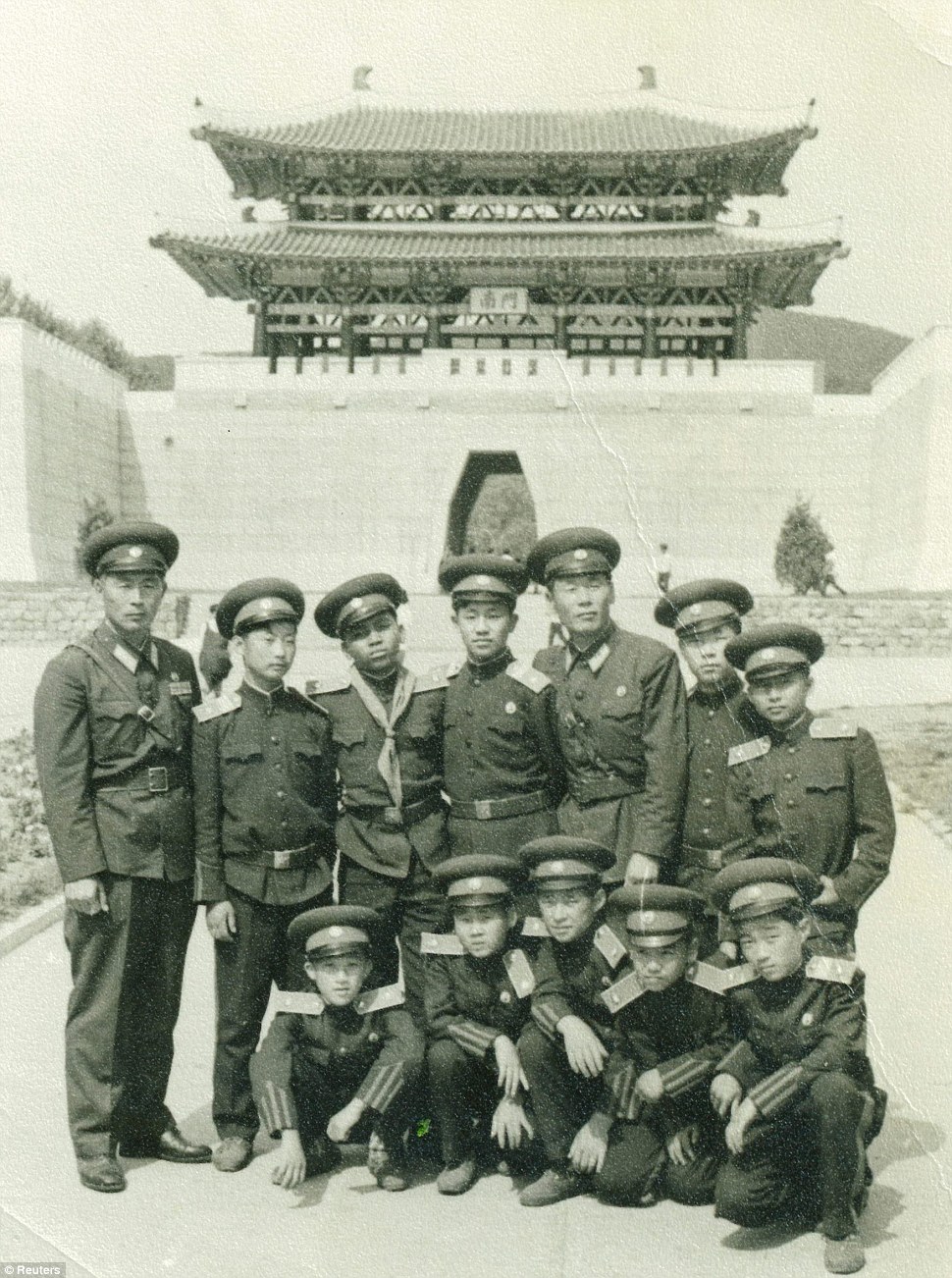 Exile: Monique, her brother Francisco (second row, third from left) and sister arrived in North Korea in the 1970s, shortly before their father was executed 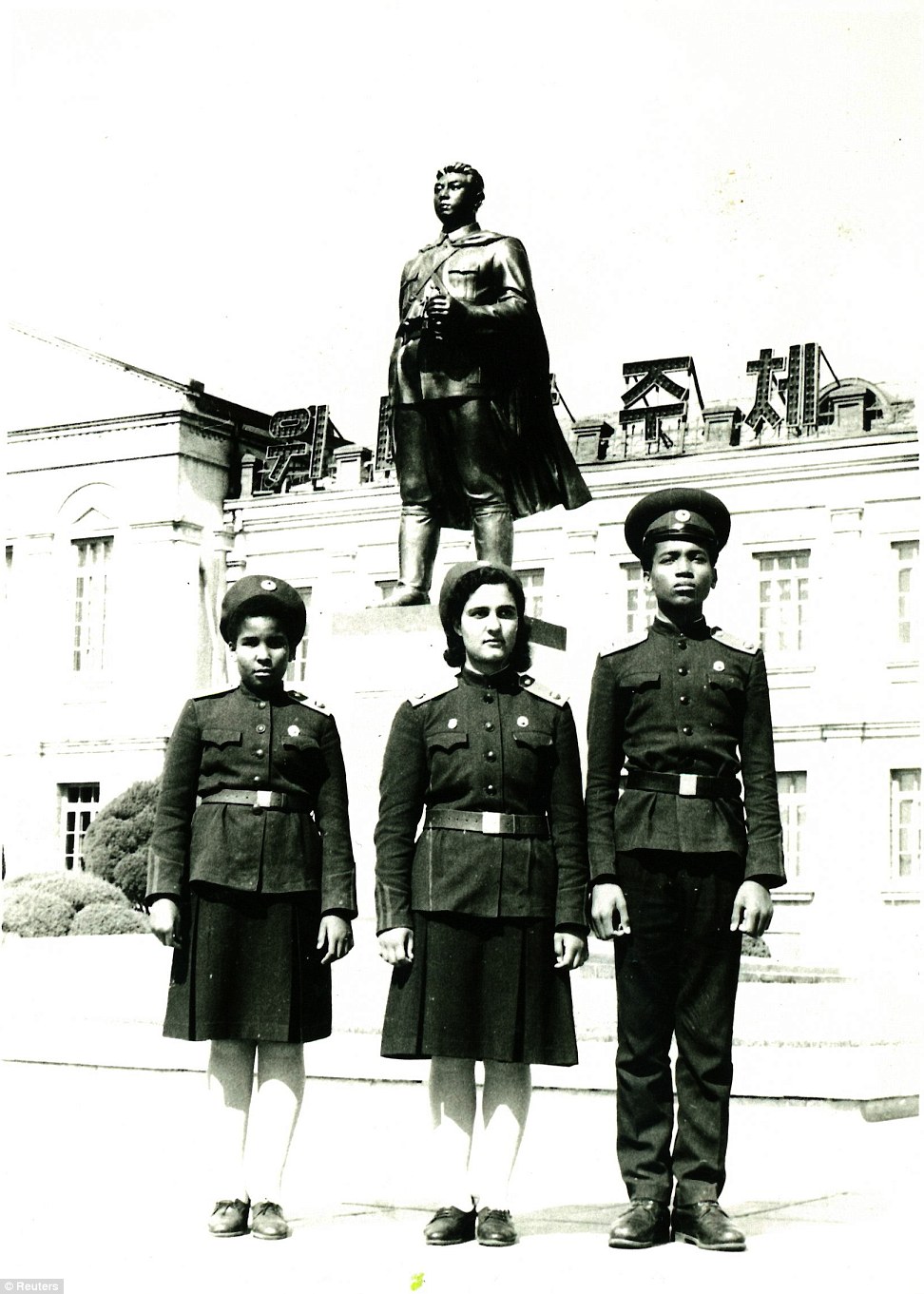 Military operation: Monique Macias (left) stands in front of the Mangyongdae Revolutionary School with her elder sister Maribelle (centre) and brother Fransico (right) during their first year at school in 1989 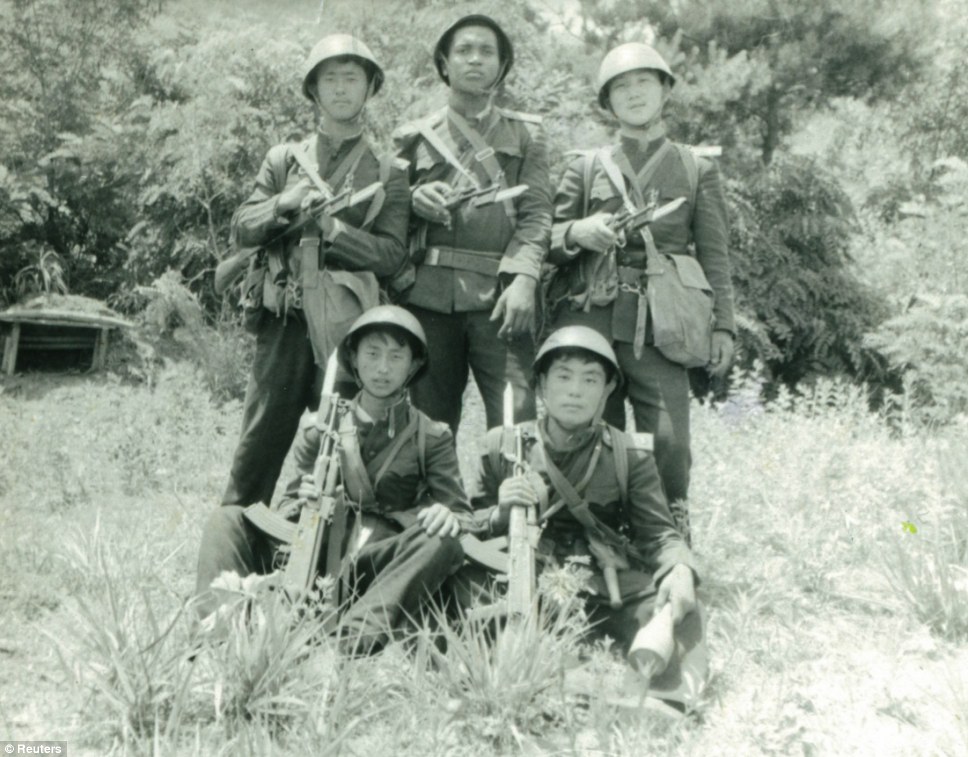 Exercises: Monique’s brother Francisco (back row, centre) poses during a military school training exercise. Their rifles are complete with bayonets 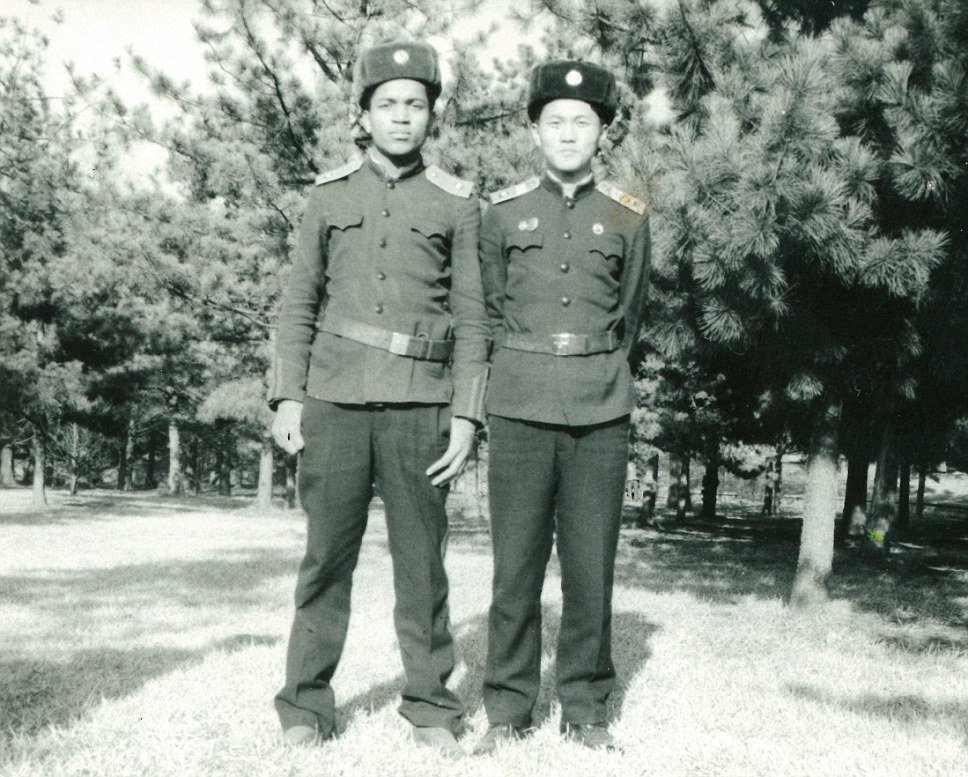 Friendship: Francisco (left) poses for a photo with a friend in the grounds of the Mangyongdae Revolutionary School in Pyongyang in 1984

This, she said, is what inspired her to publish her memoirs now, with tensions between North and South Korea running high.
She said: ‘Although North and South say they want unification, they don’t actually know each other as people. If we want unification, we have to bury prejudice.’
Ms Macias, who left North Korea in 1994 and spends time with family in Spain, still speaks Korean as her first language after those formative years in Pyongyang with children of the elite.
On social occasions the country’s founding leader, Kim Il-sung, would nag her to study hard, which made him seem like a ‘typical Korean grandfather’.
At the Mangyongdae Revolutionary School, the uniform worn by Ms Macias and her sister and brother was a military-style jacket with officer’s pips on the epaulettes and a green cap emblazoned with a shiny red star.
Her education, which she speaks highly of, was peppered with survival courses and drills. 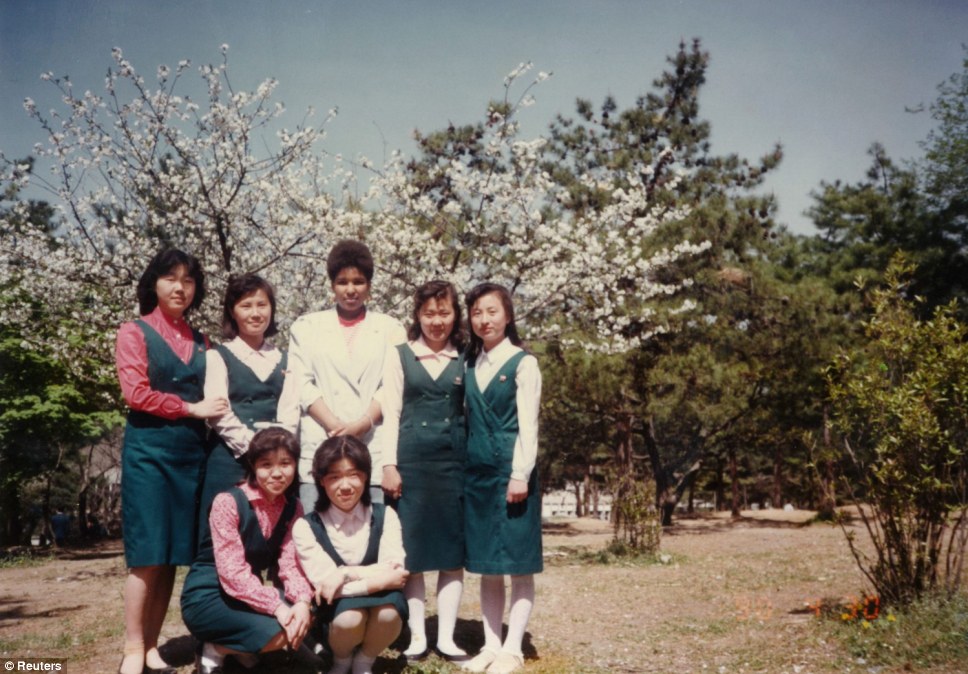 Education: Monique (second row, centre) poses with fellow students in 1990 while studying at a Pyongyang university 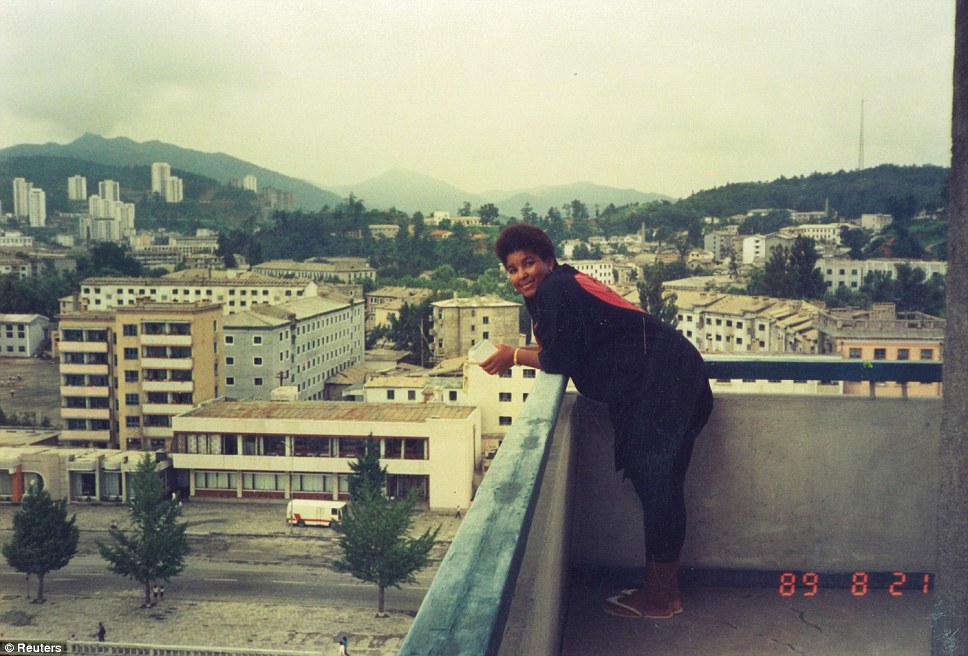 Holiday fever: Monique poses at the top of the Dongmyong hotel in Wonsan, eastern North Korea, during a break in August 1989 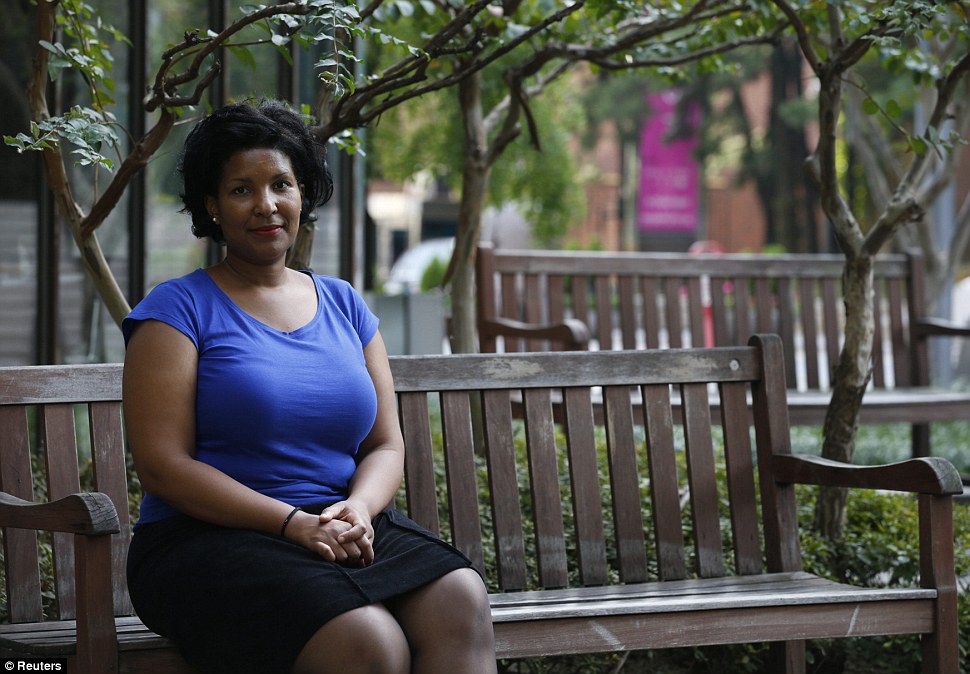 Memoirs: Now in her 40s, Ms Macias poses for the camera during an interview in central Seoul last week

She said: ‘The first week, all of us were so hungry after shooting, climbing and running every day that we ate our weekly rations in three days and, for the other four days, we were hungry.
‘But we learned – we learned we had to organise ourselves.’
The school traditionally took only boys but Ms Macias said a class was created for girls so she and her sister could study together.
Each girl was given a Kalashnikov to train with and had to learn how to strip, clean and reassemble it.
She said: ‘Most people could shoot guns when they were 18 or 19. But because I was put in the only class with girls my sister’s age, I was able to shoot when I was 14.

‘I could probably still shoot it but I don’t remember how to strip it.’
She recalls rumours in 1989 of the Tiananmen Square democracy movement and subsequent massacre in Beijing reaching the hallways of North Korean colleges.
‘I felt university students in Pyongyang at the time were thinking about change too. Although they (North Korean media) didn’t report it, a lot of people knew about it.’
Under the North Korean education system, anti-Americanism became a constant factor in her understanding of the world as a child, something that made meeting her first American a big shock on a rare trip to see relatives in Beijing.
She said: ‘At that time no one there spoke English and I was lost. I saw a white guy passing and I asked him if he spoke English but when he started talking he had an American accent,’ Macias said.
‘I was so scared. I thought “oh my god, it’s an American”. My palms were sweating and I just started to run. He was shouting “hey, stop! I’m not going to eat you”.’
This week, state media in North Korea criticised a report by a US think-tank on scenarios for the collapse of a reclusive country with a grim record of famine, prison camps and nuclear brinkmanship.
But Ms Macias sees that as unlikely.
She said: ‘There are people in North Korea who know that this is not the right way to live,” she told Reuters in Seoul.
‘I don’t think it’s going to collapse easily. What I’ll say is that it can open up like China but very, very slowly.’ 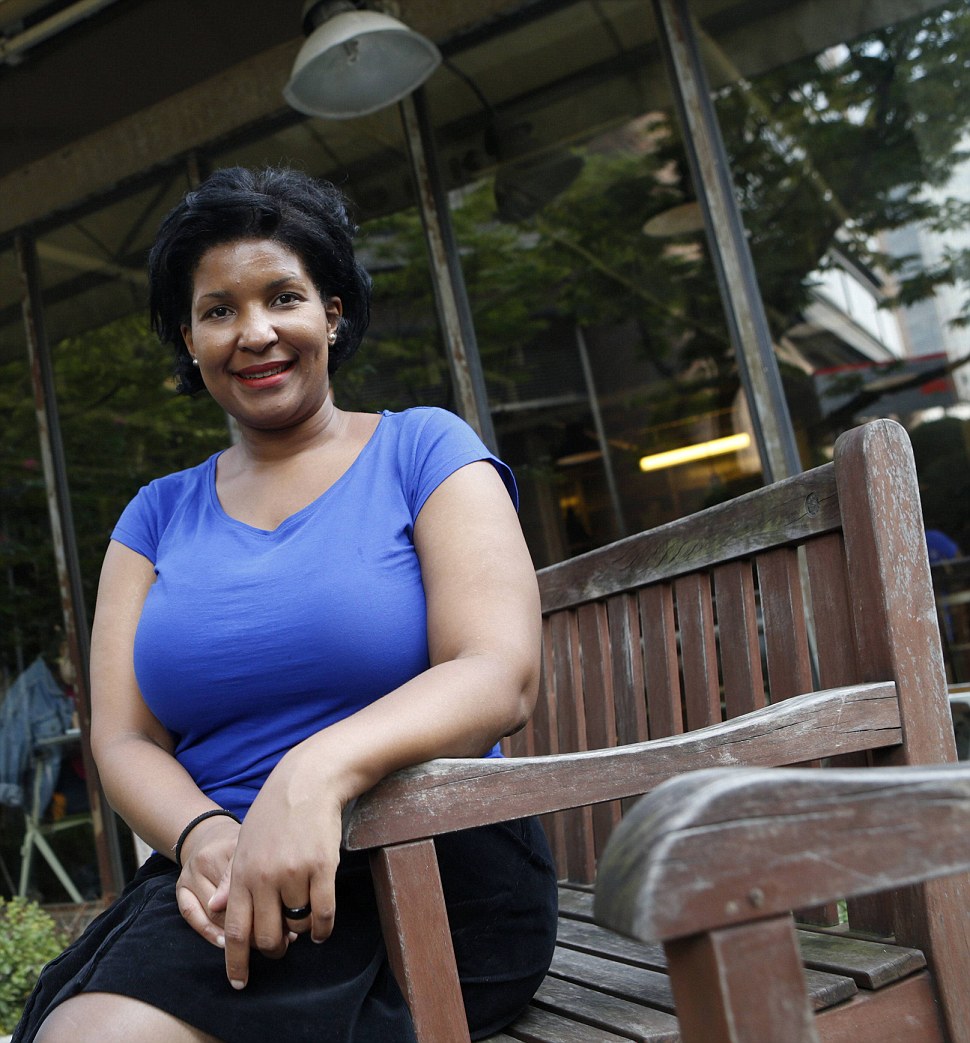 Bubbly: Ms Micias, now in her 40s, spends much of her time living with relatives in Spain, although she was in Seoul for the launch of her memoirs

Prince Among Slaves: True story of an African Prince enslaved in America