Two Roman-era shipwrecks have been found in deep water off a western Greek island, challenging the idea that ancient shipmasters stuck to coastal routes.

The merchant ships were sunk nearly a mile deep between Corfu and Italy – proving that ancient traders didn’t ‘hug the shore’.

Greece’s culture ministry said the two third-century wrecks were discovered earlier this month during a survey of an area where a Greek-Italian gas pipeline is to be sunk. 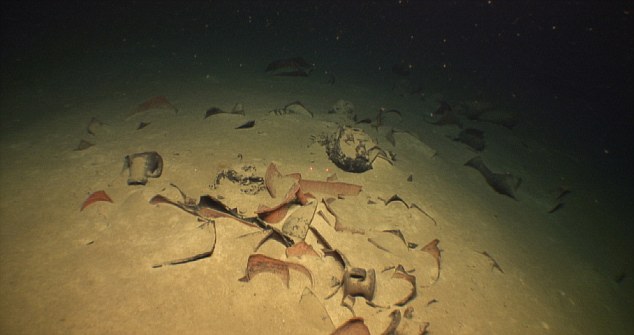 Broken ancient pottery from the 3rd Century AD ship: The merchant ships were sunk nearly a mile deep between Corfu and Italy – proving that ancient traders didn’t ‘hug the shore’

They lay between 0.7-0.9 miles deep in the sea between Corfu and Italy.

That would place them among the deepest known ancient wrecks in the Mediterranean, apart from remains found in 1999 of an older vessel some 3 kilometers 1.8 miles deep off Cyprus.

Most scholars believe that ancient traders were unwilling to veer far offshore, unlike warships which were unburdened by ballast and cargo.

‘There are many Roman shipwrecks, but these are in deep waters. They were not sailing close to the coast,’ Simossi said.

‘The conventional theory was that, as these were small vessels up to 80 feet long, they did not have the capacity to navigate far from the coast, so that if there was a wreck they would be close enough to the coast to save the crew,’ she said.

U.S. archaeologist Brendan Foley, who was not involved in the project, said a series of ancient wrecks located far from land over the past 15 years has forced experts to reconsider the coast-hugging theory. 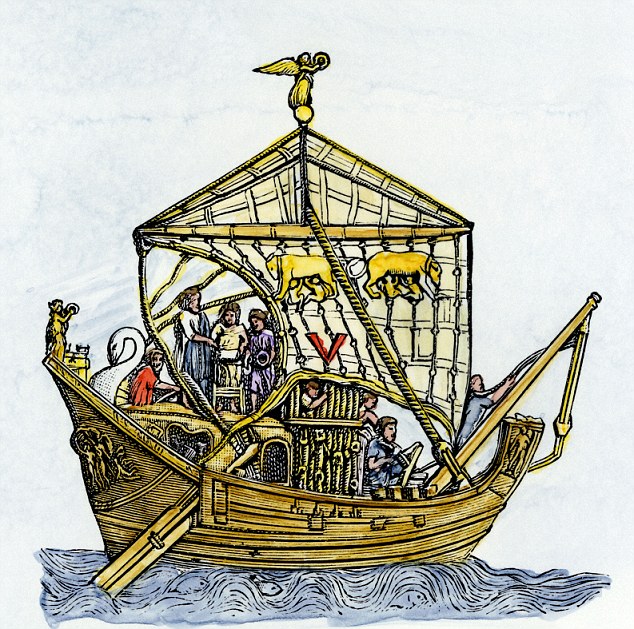 The ships, from the 3rd Century AD, prove that merchant craft of the era didn’t ‘hug the shore’ and sailed across deep water instead

Jeffrey Royal, director of the Key West, Florida, based RPM Nautical Foundation, said that in many cases – as when winds threatened to push ships onto rocks – ancient mariners made a conscious effort to avoid coastal waters.

Royal, whose foundation has carried out a series of Mediterranean underwater projects, said the depth of such finds is immaterial from an archaeological standpoint.

‘In antiquity ships didn’t sail around with depth finders and keep track of how deep they were,’ he said. ‘It was more how far they were on the surface in relation to land. After 30 meters of depth the boat’s safe, so if it’s 30 meters (100 feet) or 3,000 meters it’s a little irrelevant.’

The remains were located during an investigation that covered 200 square kilometers (77 square miles) of seabed off the islands of Corfu and Paxoi.

A Greek oceanographic vessel using side-scan radar and robot submarines took footage of scattered cargo – storage jars, or amphorae, used to carry foodstuffs and wine – cooking utensils for the crew, anchors, ballast stones and what could be remains of the wooden ships.

The team also raised samples of pottery and a marble vase.

The one ship was carrying the kind of amphorae produced in north Africa, and Simossi said it might have sailed from there and headed for Greece after a stop in Italy.

Foley said deep wrecks are very important because they are almost always more intact than those found in shallow water.

‘So they contain far more archaeological and historical information than other sites,’ he said in an email. ‘As a result, the deep sea floor of the Mediterranean is the world’s greatest repository for information about the earliest civilizations.’

The discovery comes amid Greece’s acute financial crisis, which has also taken a toll on funding for archaeology.

Simossi said her department, which monitors a vast area rich in ancient wrecks and sunken settlements, had its staff reduced by half because of non-renewed contracts and retirees who were not replaced.