Governor Deval Patrick has named his former chief-of-staff William “Mo” Cowan to serve as interim US senator for Massachusetts until a special election can be held this summer to fill the seat left vacant by John Kerry’s confirmation as the nation’s new secretary of state.
A person with knowledge of the appointment who spoke on condition of anonymity because an official announcement has not been made said Patrick picked Cowan, who will serve until the special election on 25 June. An announcement was expected later Wednesday morning.
Patrick gave little indication whom he favored during his deliberations. The only possible candidate Patrick confirmed speaking with was former congressman Barney Frank, and then only after Frank told reporters he’d spoken with Patrick. 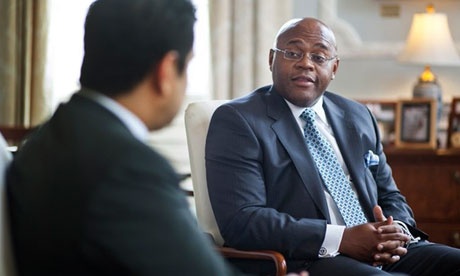 William ‘Mo’ Cowan, former chief of staff for governor Deval Patrick, will act as interim senator to fill out the term for John Kerry. Photograph: AP

Michael Dukakis, the former governor and 1988 Democratic presidential nominee, and Victoria Kennedy, widow of US senator Edward Kennedy, had also been mentioned as possible candidates for the interim post.
Cowan’s appointment also signals the official start of the special election race. So far the only announced candidate is Democratic US representative Edward Markey. Fellow Democratic congressman Stephen Lynch also is weighing a run and is expected to announce his final decision soon.
Former US senator Scott Brown, who won the 2010 special election to fill the seat left vacant by the death of longtime Democratic senator Edward Kennedy, has not announced whether he will run in the special election.
Brown, who is still popular in Massachusetts despite his unsuccessful re-election campaign last year, would be considered a frontrunner with a campaign effort that could easily be revived and an ability to raise tens of millions of dollars.
Brown also has some hurdles, including his loss last year to Democratic US senator Elizabeth Warren.
A primary is scheduled for 30 April.
The candidates face a tight schedule to raise money and convince voters to put them in the Senate.
Massachusetts secretary of state William Galvin said he’s ready to immediately release nomination papers. Candidates will have four weeks to collect the 10,000 signatures they need to get on the ballot.
Markey has already publicly challenged all Democratic and Republican candidates who might jump into the special election to agree to keep outside groups from spending money on political ads. He said he wants a deal similar to the so-called “people’s pledge” agreed to by Brown and Warren in last year’s Senate race.