At the End of Life, Talk Helps Bridge a Racial Divide 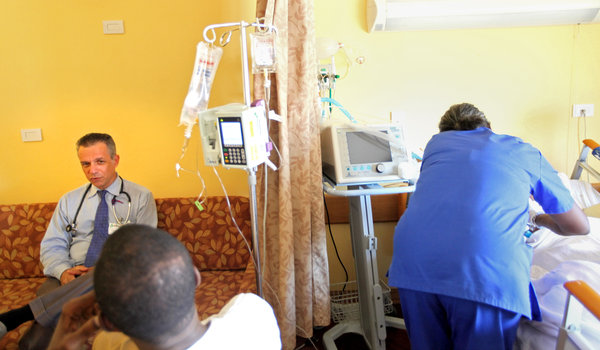 CLARITY Dr. Joseph Sacco consulted with a patient at the hospice impatient unit at Bronx-Lebanon Hospital.

The family seated opposite me is tense. Having met at the bedside of a critically ill patient only moments earlier, we have gathered in a quiet alcove next to the intensive care unit to discuss what can only be bad news.

The patient — someone’s spouse, parent, child — is dying. As a palliative care specialist, I am to explain this with clarity and empathy and elicit an informed decision about what to do next.

This encounter has come after days, weeks or even months of terrible emotional and physical anguish, avalanches of bewildering, conflicting information and opinion, hopes raised and lost, and long vigils in the family waiting area. Now, it is the opinion of the I.C.U. staff that survival is no longer an option, and I share this opinion.

Living or dying is not at issue. The question this family confronts is how the patient will die: a little sooner, with adequate morphine, surrounded by loved ones in the hospiceunit, or a little later, in a never dark or quiet patch of the I.C.U., ribs broken by failed, if well-intentioned, CPR.

Add to this the following: The patient and family are black. And while race should not be relevant at this moment, research tells us otherwise.

Blacks are much more likely than whites to elect aggressive care and to decline do-not-resuscitate orders. DNR election of even 30 percent is rare in any black community, andhospice enrollment is likewise low.

African-Americans have reasons to prefer aggressive medical management. A tradition of shared decision-making in extended black families and high rates of Christian religious affiliation appear to favor it. But more important, surely, is the lingering and pernicious effect of race-related disparity in health and health care.

Blacks suffer higher rates of chronic and preventable disease, disability and premature death than whites, and they struggle to access decent care. Misdiagnosis, underdiagnosis and substandard care are all too common. After years of inequitable treatment, who would agree to less care, to DNR or hospice when illness strikes or worsens?

Mistrust in the health care system, and the belief among blacks that doctors may withhold lifesaving treatments simply because of their race, has been demonstrated in several studies. I know of an elderly black man with advanced cancer who was asked by a doctor about CPR and hospice. “Do you ask all your patients these things?” he replied. Dick Gregory, the acerbic comedian, put it this way: “So now they are trying to get us comfortable with dying?”

Surely it is wise to bear in mind the effects of religion, family and the rest on medical decision making. But it’s wiser still not to let this become its own form of racism. Even if blacks generally prefer aggressive care, the patient seated across from me, I have found, is almost always willing to hear me out.

Dana Carr, a doctoral student at New York Medical College; Dr. Deborah Viola, an associate professor there; and I decided to look into this more objectively. We reviewed DNR orders in 1,113 seriously ill black patients seen over a six-year period by the palliative medicine consultation service at Bronx-Lebanon Hospital Center, a pioneer in providing palliative care to minority populations.

Seriously and terminally ill patients and their families were counseled on illness, treatment options and hospice care. The consequences of declining DNR and electing CPR when breathing and pulse stop — “coding,” in I.C.U. vernacular — were also made clear. For people with advanced heart, lung and liver disease, dementia or late-stage cancer, short-term survival is below 10 percent. Survival to hospital discharge — incoma, with broken ribs, coded repeatedly — approaches zero.

Our findings, published on July 9 in The American Journal of Hospice and Palliative Medicine, upend the conventional view of preferences for care among blacks. Sixty-five percent of black patients who were given palliative care consultation elected DNR, and 32 percent chose hospice — rates significantly higher than those previously demonstrated.

What made the difference? Providing patients and their families useful information in plain English, with compassion and clarity, enabling them to make choices in keeping with their desires and beliefs. Input from extended family, clergy members and parishioners was welcomed, and concern for disparity openly discussed. These exchanges, caring, honest and culturally aware, are the exception in modern American medicine. Provide them to all, I believe, and conventional wisdom will shift.

The suspicion evident in the tensed shoulders of the people I convene again and again in the alcove next to the I.C.U. fades remarkably quickly with just a modicum of empathy, truth and a rational, medically sound alternative to treatment that is often harsh and without benefit. And, should intensive care be chosen, those who provide it can be assured the decision is well informed.

Do this, and race — almost — becomes irrelevant.

Dr. Joseph Sacco is the director of the palliative medicine consultation service and hospice inpatient unit at Bronx-Lebanon Hospital Center.

Scientists say electricity could be used to regrow limbs