A glimpse into the brutal way warriors proved their prowess 3,600 has been unearthed in Egypt.

Archaeologists excavating a palace in the ancient city of Avaris have dug up four pits containing 16 large right hands believed to have been sliced from the arms of vanquished enemies.

Experts believe the discovery is the earliest and only physical evidence that soldiers used to present the cut-off right hands of enemies in exchange for gold. 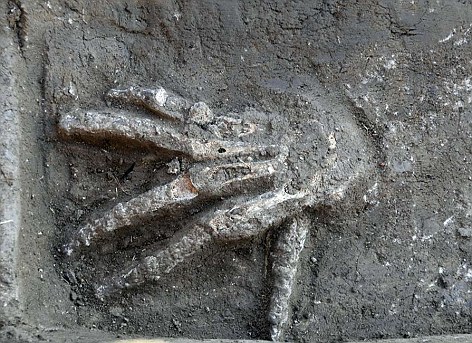 After beating the enemy successful fighters would chop off their opponents hand to remove his strength and deprive him of his power for eternity.

Two of the pits discovered are situated in front of what is thought to be a throne room and contained one hand each.

The remaining 14 hands were found in two other pits built at a slightly later time in an outer section of the palace.

All the hands found in the Nile Delta northeast of Cairo are right hands.

Manfred Bietak, project and field director of the excavations, said: ‘Most of the hands are quite large and some of them are very large.’ It was reported in LiveScience.

The finds are from a period when the Hyksos, thought to be from northern Canaan, established the heart of their kingdom at Avaris today known as Tell el-Daba.

Hyksos rulers King Khayan was thought to be living at the Palace at the time the hands were buried. 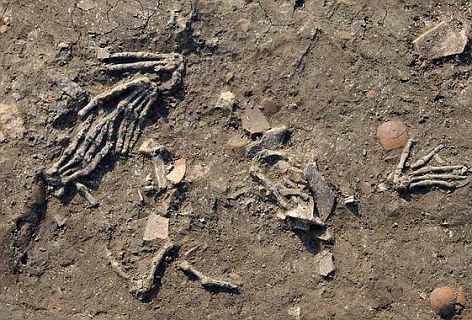 Find: In two of the pits 14 right hands were discovered, while two other pits were found holding one right hand each. It’s not known whom these hands belonged to, they could have been from Egyptians or people in the Levant 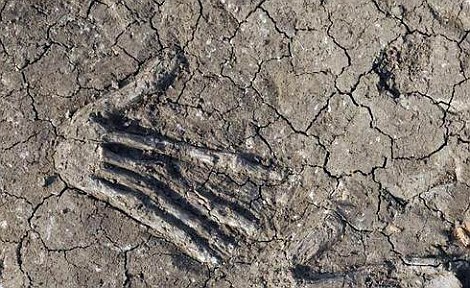 Gruesome Practice: Two right hands found in a pit. It’s not known who originally started the custom of cutting off right hands in exchange for gold

He added: ‘Our evidence is the earliest evidence and the only physical evidence at all. Each pit represents a ceremony.’

Cutting off the right hand helped to count victims and was a symbolic way of taking an enemy’s strength.

‘You deprive him of his power eternally,’ says Bietak

The hands could have belonged to Egyptians or enemies the Hyksos were fighting in the Levant.

One inscription on the tomb wall of Ahmose, son of Ibana, an Egyptian fighting in a campaign against the Hyksos about 80 years later than the time the 16 hands were buried. It read:

‘Then I fought hand to hand. I brought away a hand. It was reported to the royal herald.’ For his efforts, the writer was given ‘the gold of valor.’

Later, in a campaign against the Nubians, to the south, Ahmose took three hands and was given ‘gold in double measure,’ the inscription suggests.

Scientists are not certain who started this gruesome tradition. No records of the practice have been found in the Hyksos’ likely homeland of northern Canaan, Bietak said.

How the Ancient Egypts used pictograms to count instead of numbers