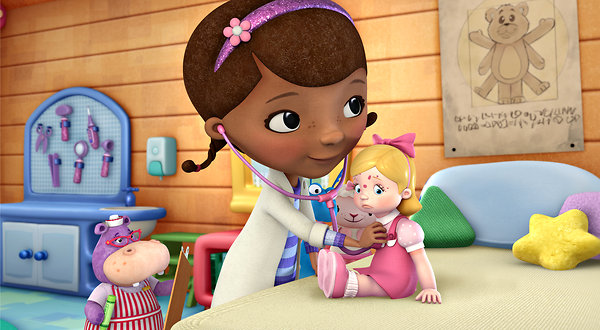 In “Doc McStuffins,” a new Disney cartoon for preschoolers, the focus is a black girl who wants to be a doctor like her mother. Her first patients are dolls and stuffed animals.

LOS ANGELES — For decades many African-Americans have voiced conflicted feelings about Disney.

Many fault this entertainment colossus for being slow to introduce a black princess as a peer to Cinderella and Snow White. (There is one now: Tiana, from “The Princess and the Frog.”) The racial stereotyping in early animated movies like “Dumbo” lives on through DVD rereleases. African-Americans can also bring up “Song of the South,” a 1946 film that Disney has labored to keep hidden because of its idyllic depiction of slavery.

Disney has worked overtime in recent years to leave that past behind, and a surprising groundswell of support from black viewers for a new TV cartoon called “Doc McStuffins” is the latest indication that its efforts may be paying off.

Aimed at preschoolers, “Doc McStuffins” centers on its title character, a 6-year-old African-American girl. Her mother is a doctor (Dad stays home and tends the garden), and the girl emulates her by opening a clinic for dolls and stuffed animals. “I haven’t lost a toy yet,” she says sweetly to a sick dinosaur in one episode.

The series, which made its debut in March on the Disney Channel and a new cable network called Disney Junior, is a ratings hit, attracting an average of 918,000 children age 2 to 5, according to Nielsen data. But “Doc McStuffins” also seems to have struck a cultural nerve, generating loud applause on parent blogs, Facebook and even in academia for its positive vocational message for African-American girls.

“It truly warmed my heart and almost brought tears to my eyes when my 8-year-old, Mikaela, saw ‘Doc McStuffins’ for the first time and said, ‘Wow, mommy — she’s brown,’ ” Kia Morgan Smith, an Atlanta mother of five, wrote on her blogCincomom.com. Myiesha Taylor, a Dallas doctor who blogs at CoilyEmbrace.com, took her praise a step further, writing, “This program featuring a little African-American girl and her family is crucial to changing the future of this nation.”

Dr. Taylor, who noticed “Doc McStuffins” while watching TV with her 4-year-old daughter, Hana, was moved enough to collect pictures of 131 doctors — all black, all women — and publish a collage online under the heading, “We Are Doc McStuffins.” She also started a related Facebook group that now has 2,250 members.

“For Disney to make a cartoon that stars a little brown girl as an aspiring intellectual professional, that’s coming a long way,” Dr. Taylor said in an interview.

Mark Anthony Neal, a professor who teaches black popular culture at Duke University, noted that Disney has sharply increased its emphasis on multicultural characters in recent years, pointing to a cartoon series called “The Proud Family” and “The Princess and the Frog,” released in 2009. But even he is impressed with “Doc McStuffins.”

“My youngest daughter, who is 9 and still has an affinity for stuffed animals, loves the show,” Mr. Neal said. “Part of the appeal for her is seeing herself represented in this space of fantasy.”

Despite a surge in multicultural cartoons, like Nickelodeon’s “Ni Hao, Kai-Lan,” designed to introduce Mandarin vocabulary words to preschoolers, and 40 years after Bill Cosby’s “Fat Albert,” black cartoon characters in leading roles are still rare. It’s considered an on-screen risk to make your main character a member of a minority, even in this post-“Dora the Explorer” age. Networks want to attract the broadest possible audience, but the real peril is in the toy aisle. From a business perspective, Disney and its rivals ultimately make most of these shows in the hope that they spawn mass-appeal toy lines. White dolls are the proven formula.

Encouraged by the reaction to multicultural casting in its live-action shows (“A.N.T. Farm”), Disney figured it was a risk worth taking. The company also spotted a hole in the market. The last major preschool cartoon to have a black focus was Mr. Cosby’s “Little Bill,” which ended five years ago on Nickelodeon. Race may have factored into Disney’s thinking in other ways. “Doc McStuffins” is mostly designed to entertain, a minus for parents of preschoolers, who typically want educational components (like the way Dora teaches Spanish and problem solving). A positive message about racial diversity helps fix that problem, as do messages about health and hygiene.

Chris Nee, who created “Doc McStuffins,” said, “Disney, to its complete credit, looked at my pitch and suggested that we make the characters African-American.” Her original Doc McStuffins was a little white girl.

Gary Marsh, the president and chief creative officer of Disney Channels Worldwide, said “Doc McStuffins” reflects a type of hypersensitivity to the power of television on young viewers. “What we put on TV can change how kids see the world, and that is a responsibility that I take very seriously,” he said. “By showcasing different role models and different kinds of families we can positively influence sociological dynamics for the next 20 years.”

Disney executives often bristle when people (read: reporters) dredge up examples of racial insensitivity from the distant past. They maintain that the company has more than proved itself over the years, pointing to It’s a Small World, the musical theme park ride celebrating multiculturalism, or “The Lion King” on Broadway, which features a predominantly black cast. 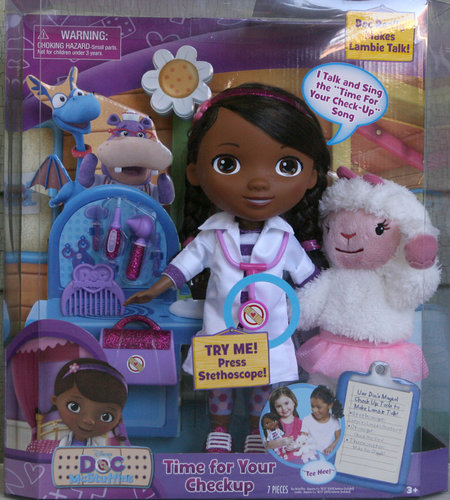 But race remains a perennial hot button for the company. In June, for instance, Shonda Rhimes, the creator of “Grey’s Anatomy,” publicly assailed a program on the cable network ABC Family (owned by Disney) for its lack of diversity. “You couldn’t cast even ONE young dancer of color so I could feel good about my kid watching this show? NOT ONE?” Ms. Rhimes, who is black, said on Twitter about “Bunheads,” a series about ballerinas.

When it comes to “Doc McStuffins,” Ms. Nee, whose résumé, curiously enough, includes producing Discovery Channel’s “Deadliest Catch,” just wanted to make a show that was enjoyable and that could help her 5-year-old son, Theo, feel better about his asthma. “I wanted to help him understand that doctors aren’t scary,” Ms. Nee said.

In a nod to Disney’s “Toy Story” movies Ms. Nee gave added some sidekicks that come alive when nobody else is around. There is a hippo named Hallie (voiced by Loretta Devine) and a hypochondriac snowman named Chilly. “ ‘Cheers’ for preschoolers” is one way Ms. Nee describes the show’s mix of personalities.

African-Americans are represented among the show’s writers and animators, according to a spokeswoman, adding that voice actors are ethnic matches to their roles, except for one instance in which an African-American plays a white character.

Disney Junior, which is distributed in about 55 million homes and competes against channels like Nick Jr. and Sprout, recently announced that “Doc McStuffins” would return for a second season. Its ratings have drooped a bit from their strong start, but the series has attracted a surprisingly large following among boys — and related merchandise is already selling briskly.

Who Is Jamaica? (History of Jamaica)