The Met should change its heart, not its face, to represent multiracial London

In floating a positive discrimination recruitment policy, the Metropolitan police is right to recognise that London’s force should look like its population but wrong to think that a change of face is more important than a change of behaviour to gain the trust of London’s multiracial communities. To work effectively, community policing requires a mandate and relationship with local citizens. However the ethnicity of an officer is irrelevant if the same communities still feel over-policed as suspects and under-policed as victims.
One example is the use of stop and search. My first experience of this on Wood Green High Street aged 17 appeared to be on the grounds that in a busy shopping area anyone who is young, black and tracksuited looks suspicious. Many of my friends have worse stories: William, a 23-year-old British-African Caribbean from Brixton with no convictions, has been stopped twice this year, once by an undercover black officer in Brixton and once on his way to church; 26-year-old Jermaine has counted being stopped over 50 times since passing his driving test. The disproportionate use of stop and search on young black men – we are twice as likely to be stopped as white Londoners – will not change our views of the police just because the act is carried out by black officers. 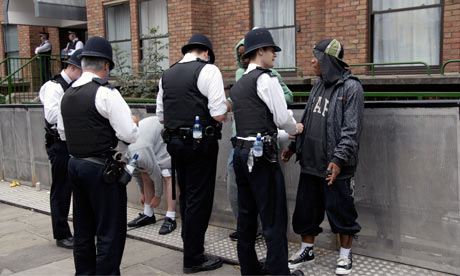 ‘The disproportionate use of stop and search on young black men will not change our views of the police just because the act is carried out by black officers.’ Photograph: Janine Wiedel Photolibrary/Alamy

The presence of a more racially diverse police force matters but not more than a Met that holds its officers to account. The IPCC has inherited the flaws of its predecessor and the complaints systems are considered a pointless paper exercise, which further undermines public confidence. Three officers are currently facing criminal investigation following an independent review concluded barely a month ago into the death of Sean Rigg that was heavily critical of the IPCC. London’s local interfaces for communities, which act as a forum for local people, have been effectively closed by City Hall. Community and Police Consultative Groups (CPEGS) which were born out of the recommendations of the Scarman report into the 1981 Brixton riot, were axed by Boris Johnson following his re-election, however their proposed replacement remains to be seen.
It is unclear what the main ambition is behind the Met’s reported plans. Yet they are sounding the alarm for new black recruits when the Met is struggling to retain them. Last week the Met lost a tribunal brought by a former black and gay officer, Kevin Maxwell, who says he was sacked from the force after raising concerns about the discrimination he experienced. In addition the largest association of BME officers, the Black Police Association, continues to state that the Met has a problem with institutional racism.
A police force that speaks London’s many languages, from cockney rhyming slang, city patois to Urdu, is a more effective organisation but if the Met wants to police with the consent of the diverse community it is serving, its priority should be to combat an institutional culture with reforms that make it more accountable to change its heart and not its face.
http://www.guardian.co.uk/commentisfree/2013/jun/03/met-multiracial-london-racially-diverse

Many American's in the 1860's moved to Haiti, and used Haitian Revolution as inspiration