By THOMAS KAPLAN
Published: December 6, 2012
New York is one of the most diverse states in the nation, with 3.5 million Hispanics, 2.8 million blacks and 1.5 million Asians. More than 40 percent of its residents are minorities.
et all of its statewide elected officials are white politicians. And in Albany, Republicans and a group of dissident Democrats have taken control of the State Senate by forming a coalition that would consist almost entirely of white lawmakers.
The coalition would prevent the Senate Democratic caucus, which includes 14 blacks and Hispanics and is the only legislative caucus in Albany led by a nonwhite person, from taking power. Democrats have 31 of the 63 seats in the Senate, and are expected to win seats in two districts where votes are still being counted; Republicans have 30 seats.
Black and Hispanic leaders are growing increasingly concerned about their standing in state government, noting that only two years ago, the governor’s office was held by a black man, David A. Paterson, and a diverse Democratic caucus controlled the Senate chamber.
“This coalition of convenience will limit the elevation of people that communities of color elected all across the state to positions of significance,” said Hakeem S. Jeffries, a Democratic assemblyman from Brooklyn who won a seat in Congress last month. 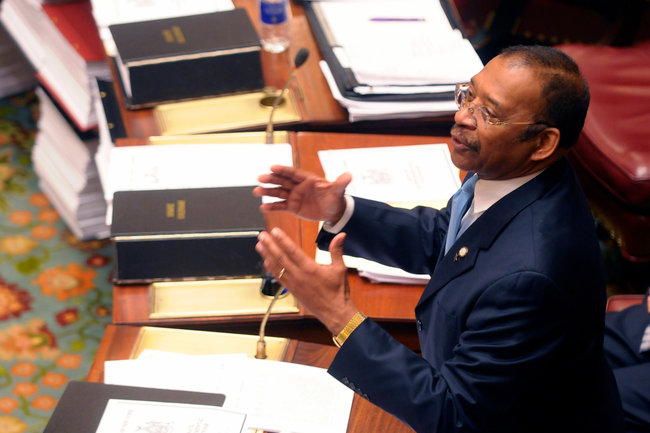 State Senator Rubén Díaz Sr. says that with Republicans keeping control of the Senate, “There’s nothing for minorities.”

“That reality is one that disturbs a great many people and is one of the reasons why undermining the will of the electorate through this back-room deal is problematic,” he added.
The emergence of the coalition, which made its plans public on Tuesday, is exposing power struggles in Albany that appear to be fueled by race and personality, as well as ideology.
Ethnicity has been a source of conflict in the Senate for some time. The leadership turmoil after Democrats won a Senate majority in the 2008 elections began in part because a group of lawmakers, who called themselves the four amigos, were upset at what they described as a lack of Latinos in key leadership positions. And civil rights leaders have been upset with the Senate since last winter, when the Republican majority drew a redistricting plan that they said diluted the voting strength of minority communities in places like Buffalo, Rochester and Long Island.
“Now, there’s nothing for them,” said Rubén Díaz Sr., a Bronx Democrat and the only one of the four amigos who is still in the Senate. “There’s nothing for minorities. Of course it concerns me. What are we doing? We minorities, we’re not getting anywhere.”
At the same time that minority leaders are frustrated and angered at seeing political power slip from their grasp, other liberals are angry at Gov. Andrew M. Cuomo for not using his considerable political muscle to help elect more of his fellow Democrats to the Senate, or to demand Democratic control in the wake of the election. Mr. Cuomo has insisted that the Senate has to determine its own leadership, and noted that the last time the Democrats had a majority in the Senate, in 2009 and 2010, the chamber was often chaotic. 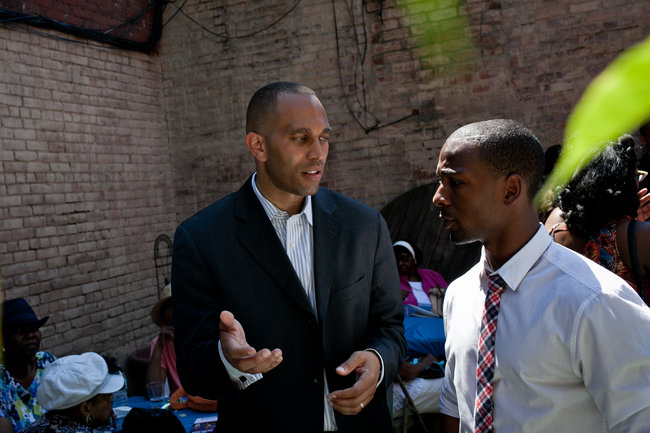 Hakeem Jeffries, left, who was just elected to Congress, contends that a coalition poised to run the Senate will harm New York’s minority voters.

In a public expression of anger at the unfolding events in Albany, the Rev. Al Sharpton has called on civil rights leaders to rally on Saturday to protest the new Senate leadership coalition, which he said would serve to “effectively deny these legislators of color what is rightfully theirs.” In an interview, Mr. Sharpton said he hoped that Mr. Cuomo would speak out and urge that minority lawmakers receive committee chairmanships.
“We are in a dramatic and graphic retreat on black and Latino inclusion in state government,” Mr. Sharpton said, adding of Mr. Cuomo, “If any of the statements about him having ambition for national politics is true, how does he go to the country having presided over the retreat of inclusion in his own Legislature? How does he do that?”
Assemblyman N. Nick Perry, a Brooklyn Democrat who is chairman of the New York State Association of Black and Puerto Rican Legislators, was also unhappy. “The African-American community is taking note of the fact that the potential for a position that has statewide impact to be held by an African-American is being beaten back,” he said.
In an interview, Senator Jeffrey D. Klein, who leads the group of five Democrats who formed the coalition with the Republicans, said the arrangement would foster collaboration that would allow for action on a number of policy measures favored by minority lawmakers that languished in the Legislature this year. As examples, Mr. Klein, from the Bronx, said he was confident that Republicans would not block floor votes on legislation to raise the state’s minimum wage, change a marijuana-possession law that has led to a high number of stop-and-frisk arrests and create a private fund to help the children of illegal immigrants pay college tuition.
“We want to make sure all of these issues get a fair shake on the Senate floor, and when they do I’m very confident that they’ll pass the full Senate,” Mr. Klein said, recalling the dysfunction when the Democrats were in control of the Senate and shifting alliances sometimes handcuffed it. “We’re committed to the same progressive agenda that we’ve always supported.”
Scott Reif, a spokesman for the Senate Republicans, said, “The new Senate majority coalition represents the interests of all New Yorkers.” 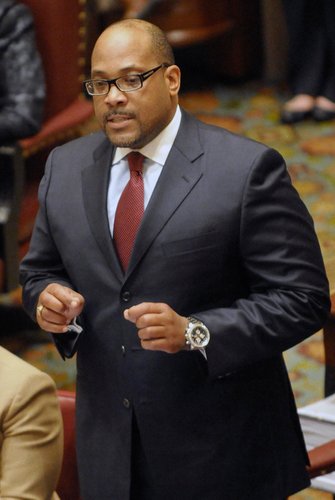 Many Democrats, however, said they were skeptical that the coalition-led Senate would pay attention to minority communities in the way that the Senate Democrats would have, given that the Republicans have been the main roadblock to a host of legislative priorities for lawmakers from minority communities. Some Democrats said they were concerned that the Republicans would water down some measures, like efforts to provide state tuition aid to illegal immigrants, or block some that are contentious, like microstamping for semiautomatic pistols.
“One more reason that we should have a Democratic majority is we would have a more fair representation of what the state actually looks like in policy-making positions in the State Senate,” said Senator Gustavo Rivera, a Bronx Democrat.
Mr. Klein’s group, the Independent Democratic Conference, had been all-white until Tuesday, when it added a fifth member, Malcolm A. Smith, from Queens, who formerly led the Senate Democrats but now says he is considering running for mayor of New York City as a Republican. A sixth Democrat, Simcha Felder, from Brooklyn, has said he will join the Republican caucus, giving the new alliance between it and the Independent Democratic Conference at least 36 votes when the Legislature begins its next session, in January.
Mr. Klein said he would welcome more black and Hispanic senators to his group of breakaway Democrats. “The Independent Democratic Conference is not an exclusive club,” he said. “It’s open to all senators who are serious about governing.”
The Senate Democratic caucus has been led by black lawmakers for the past decade. The current leader, John L. Sampson, from Brooklyn, said it was “inclusive” and “reflective of the state of New York.” He said he was concerned that Senate Republicans were trying to “steal power and control.”
“What should be of concern to New Yorkers is the Republicans, our State Senate colleagues, trying to nullify or void the mandate of the voters,” Mr. Sampson said.
James Sanders Jr., a Democratic councilman from Queens who was elected to the Senate last month, said of the pact, “This move passes the legal test but it doesn’t pass the smell test.”
“People of color could have actually chosen to be one of the three people in the room,” he said, referring to the traditional Albany power-troika of the governor, the Assembly speaker and the Senate majority leader. “Now that opportunity does not exist.”

South African Students get trampled trying to enroll in college