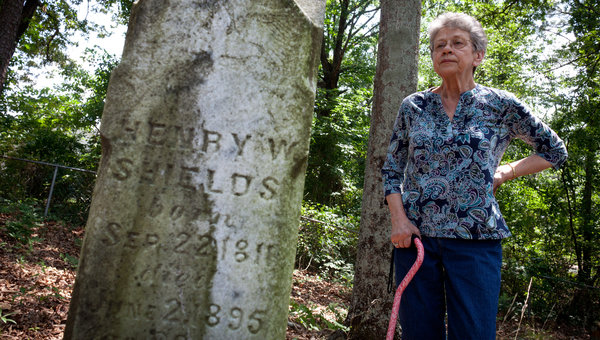 Joan Tribble at the grave of her great-great-grandfather, Henry W. Shields, a Georgia slave owner who is also an ancestor of Michelle Obama.

REX, Ga. — Joan Tribble held tightly to her cane as she ventured into the overgrown cemetery where her people were buried. There lay the pioneers who once populated north Georgia’s rugged frontier, where striving white men planted corn and cotton, fought for the Confederacy and owned slaves.

The settlers interred here were mostly forgotten over the decades as their progeny scattered across the South, embracing unassuming lives. But one line of her family took another path, heading north on a tumultuous, winding journey that ultimately led to the White House.

The white men and women buried here are the forebears of Mrs. Tribble, a retired bookkeeper who delights in her two grandchildren and her Sunday church mornings. They are also ancestors of Michelle Obama, the first lady.

The discovery of this unexpected family tie between the nation’s most prominent black woman and a white, silver-haired grandmother from the Atlanta suburbs underscores the entangled histories and racial intermingling that continue to bind countless American families more than 140 years after the Civil War.

The link was established through more than two years of research into Mrs. Obama’s roots, which included DNA tests of white and black relatives. Like many African-Americans, Mrs. Obama was aware that she had white ancestry, but knew little more.

Now, for the first time, the white forebears who have remained hidden in the first lady’s family tree can be identified. And her blood ties are not only to the dead. She has an entire constellation of white distant cousins who live in Georgia, South Carolina, Alabama, Texas and beyond, who in turn are only now learning of their kinship to her.

Those relatives include professionals and blue-collar workers, a retired construction worker, an accountant, a dietitian and an insurance claims adjuster, among others, who never imagined they had black relatives. Most had no idea that their ancestors owned slaves.

Many of them, like Mrs. Tribble, 69, are still grappling with their wrenching connection to the White House. “You really don’t like to face this kind of thing,” said Mrs. Tribble, whose ancestors owned the first lady’s great-great-great-grandmother.

Some of Mrs. Tribble’s relatives have declined to discuss the matter beyond the closed doors of their homes, fearful that they might be vilified as racists or forced to publicly atone for their forebears.

Mrs. Tribble has decided to openly accept her history and her new extended family.

“I can’t really change anything,” said Mrs. Tribble, who would like to meet Mrs. Obama one day. “But I can be open-minded to people and accept them and hope they’ll accept me.”

The bloodlines of Mrs. Obama and Mrs. Tribble extend back to a 200-acre farm that was not far from here. One of their common ancestors was Henry Wells Shields, Mrs. Tribble’s great-great-grandfather. He was a farmer and a family man who grew cotton, Indian corn and sweet potatoes. He owned Mrs. Obama’s maternal great-great-great-grandmother, Melvinia Shields, who was about 8 years old when she arrived on his farm sometime around 1852.

The DNA tests and research indicate that one of his sons, Charles Marion Shields, is the likely father of Melvinia’s son Dolphus, who was born around 1860. Dolphus T. Shields was the first lady’s maternal great-great-grandfather. His identity and that of his mother, Melvinia, were first reported in an article in The New York Times in 2009, which also indicated that he must have had a white father.

Melvinia was a teenager, perhaps around 15, when she gave birth to her biracial son. Charles was about 20.

Such forbidden liaisons across the racial divide inevitably bring to mind the story of Thomas Jefferson and his slave Sally Hemings. Mrs. Obama’s ancestors, however, lived in a world far removed from the elegance of Jefferson’s Monticello, his 5,000-acre mountain estate with 200 slaves. They were much more typical of the ordinary people who became entangled in America’s entrenched system of servitude.

In Clayton County, Ga., where the Shields family lived, only about a third of the heads of household owned human property, and masters typically labored alongside their slaves. Charles was a man of modest means — he would ultimately become a teacher — whose parents were only a generation or so removed from illiteracy.

Melvinia was not a privileged house slave like Sally. She was illiterate and no stranger to laboring in the fields. She had more biracial children after the Civil War, giving some of the white Shieldses hope that her relationship with Charles was consensual.

“To me, it’s an obvious love story that was hard for the South to accept back then,” said Aliene Shields, a descendant who lives in South Carolina.

People who knew Melvinia said she never discussed what happened between them, whether she was raped or treated with affection, whether she was loved and loved in return. Somewhere along the way, she decided to keep the truth about her son’s heritage to herself. 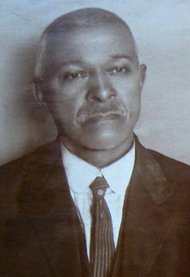 Dolphus T. Shields, the son of a slave, was Michelle Obama’s great-great-grandfather.

Ruth Wheeler Applin, who knew Melvinia and Dolphus, suspected that Melvinia had been raped by her master. But Mrs. Applin, who married Melvinia’s grandson and lived with her for several years in the 1930s, never asked that sensitive question. Melvinia died in 1938.

For many members of that first generation to emerge from bondage, the experience of slavery was so shameful and painful that they rarely spoke of it. This willful forgetting pervaded several branches of the first lady’s family tree, passed along like an inheritance from one generation to the next.

Mrs. Obama declined to comment on the findings about her roots, as did her mother and brother. But over and over, the black members of her extended family said their parents, grandparents and other relatives did not discuss slavery or the origins of the family’s white ancestry.

Nor was the topic much discussed within Mrs. Obama’s immediate family. She and her brother, Craig Robinson, watched the mini-series “Roots,” about Alex Haley’s family’s experience in slavery. During summers, the family would visit relatives who lived in a South Carolina town dotted with old rice plantations. But they never discussed how those plantations might be connected to their personal history.

Nomenee Robinson, Mrs. Obama’s paternal uncle, said he found himself stymied whenever he tried to delve into the past. His line of the family also has white ancestry, relatives say.

“All of these elderly people in my family, they would say, ‘Boy, I don’t know anything about slavery time,’ ” he said. “And I kept thinking, ‘You mean your mother or grandmother didn’t tell you anything about it?’ What I think is that they blocked it out.”

Contemporary America emerged from that multiracial stew, a nation peopled by the heirs of that agonizing time who struggled and strived with precious little knowledge of their own origins. By 1890, census takers counted 1.1 million Americans of mixed ancestry.

All four of Mrs. Obama’s grandparents had multiracial forebears. There were Irish immigrants who nurtured their dreams in a new land and free African-Americans who savored liberty long before the Civil War. Some were classified as mulatto by the census, while others claimed Cherokee ancestry.

There were even tantalizing hints of a link to a Jewish family with ties to the Charleston, S.C., synagogue that became the birthplace of the American Jewish Reform Movement in the 19th century.

Mrs. Obama’s ancestors ultimately moved north, with some arriving in Illinois as early as the 1860s. Others settled in Maryland, Michigan and Ohio.

Dolphus’s daughter, Pearl Lewis, moved to Cleveland. Pearl’s granddaughter, Jewell Barclay, still remembers Dolphus, a stern, fair-skinned man with narrow lips and an aquiline nose. There were whispers in the family that he was half white.

“Slave time, you know how the white men used to fool with them black women, that’s what I heard,” Mrs. Barclay said.

Mrs. Barclay said she would like to meet white members of her family. Mrs. Tribble and Sherry George, a great-granddaughter of Charles Marion Shields, said they would also like to meet their black extended family.

Others remain reluctant. “I don’t think there’s going to be a Kumbaya moment here,” said one of Charles Shields’s great-grandchildren, who spoke on the condition of anonymity, fearful that the ancestral ties to slavery might besmirch the family name.

The discovery comes as an increasing number of Americans, black and white, confront their own family histories, taking advantage of widespread access to DNA testing and online genealogical records. Jennifer L. Hochschild, a professor of African and African-American studies at Harvard who has studied the impact of DNA testing on racial identity, said this was uncharted territory.

“This is a whole new social arena,” Professor Hochschild said. “We don’t have an etiquette for this. We don’t have social norms.”

Mrs. George, a hospital respiratory therapy manager, struggled to describe her reaction to the revelations. Her grandfather McClellan Charles Shields and Dolphus Shields were half brothers. They both lived in Birmingham, where Mrs. George grew up.

“I’m appalled at slavery,” said Mrs. George, 61. “I don’t know how that could have even gone on in a Christian nation. I know that times were different then. But the idea that one of our ancestors raped a slave. … ”

She trailed off for a moment, considering the awful possibility.

Mrs. Tribble, who began researching her roots before Mrs. Obama became the first lady, said she was shocked to learn that her ancestors owned slaves.

“My family, well, they were just your most basic people who never had a lot,” Mrs. Tribble said. “I never imagined that they owned slaves.”

Her mother, Lottie Bell Shields, was an orphan who picked cotton as a girl and was passed from relative to relative in a family that could ill afford an extra mouth to feed. She never got past the seventh grade.

Yet even before she took the DNA test, Mrs. Tribble had a strong feeling that her family and the first lady’s family were related. She still remembers the moment when she laid eyes on an old black-and-white photograph of Dolphus Shields. She was sitting at her kitchen table in her house in the Atlanta suburbs when she saw him staring out of the pages of The New York Times: this stern, bespectacled African-American man who happened to share her mother’s last name.

Mrs. Tribble never had any doubts about her family’s ethnic background. Yet when she stared at the photograph that day, she said she felt something entirely unexpected: a strong stirring of recognition.

“I just thought, ‘Well, he looks like somebody who could be in my family,’ ” she said.

Turned Out – Sexual Assault Behind Bars: Documentary about homosexuality in prison