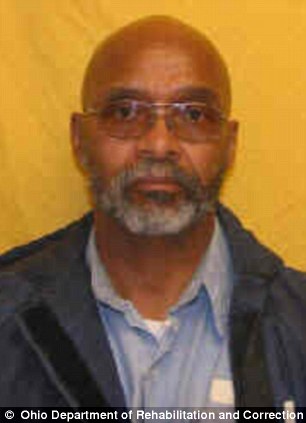 Convicted: Doug Prade, 66, a former Ohio police captain, has spent 14 years in prison largely because of a bite mark found on his slain ex-wife’s body that new tests say he didn’t leave

A former Ohio police captain who has spent 14 years in prison, largely because of a bite mark found on his ex-wife’s blood-soaked body, now has new DNA test results that his attorneys say prove his innocence.

If a judge agrees, Doug Prade could become the latest of more than a dozen prisoners across the country to be set free after comparisons between their teeth and bite marks found on victims turned out to be wrong.

An Akron judge, in a ruling that could come as early as October, could exonerate Prade, order a new trial or find that the DNA test isn’t strong enough for either.

‘I told you I was innocent. Now there’s proof,’ the 66-year-old Prade said after getting the test results back, according to his attorney, Carrie Wood with the Cincinnati-based Ohio Innocence Project.

In Prade’s case, a new test has found that male DNA – taken from around a bite mark on a lab coat that his ex-wife was wearing when she was killed – is not his.

The test conducted for free by the private DNA Diagnostics Center in Fairfield, Ohio, wasn’t widely available at the time of Prade’s trial.

Prade said on Thursday that he hopes the results are enough to free him, although he’d be happy with a new trial. 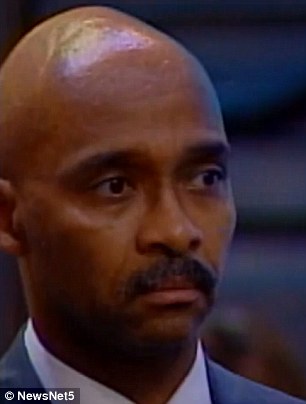 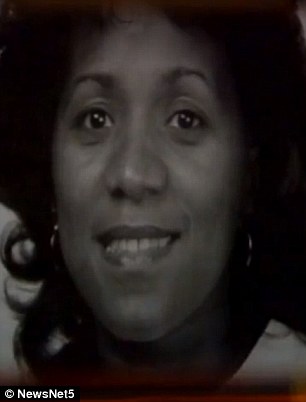 Killed: Margo Prade, 41, right, was found dead in her minivan outside her office after a physical fight that left her shot six times, seven months after her divorce from Prade, seen left in trial

‘For them to find what I had known all that time was no surprise to me,’ he told The Associated Press in a phone interview from a central Ohio prison. ‘I guess it was an epiphany to everyone else – “Hey, this guy was telling the truth.”‘

Once considered cutting-edge science, bite-mark comparisons have been under fire for more than a decade. Across the country, at least 11 prisoners convicted of rape or murder based largely on bite mark-comparisons were exonerated – eight of them with DNA evidence. At least five other men more were proved innocent as they sat in prison awaiting trials.

Some forensic dentists have renounced the practice altogether, while many say it’s still a useful tool if applied properly.

While Prade’s attorneys say the new test is proof that Prade is innocent, prosecutors are arguing that the male DNA could have gotten on the coat before or after Margo Prade was killed, although further testing on other parts of the lab coat didn’t turn up any male DNA. 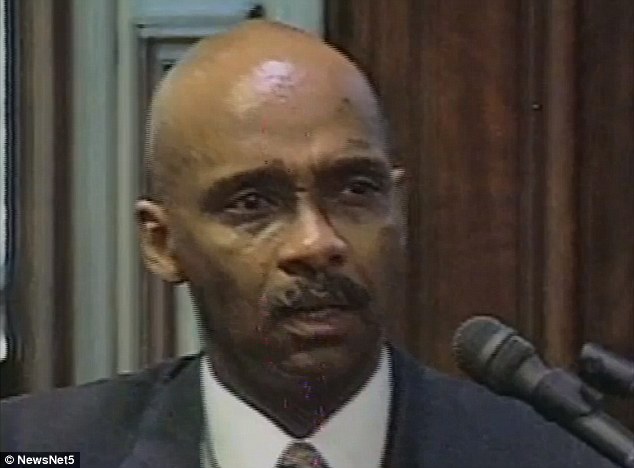 Possibilities: With the new DNA test results, an Akron judge could rule as early as October to exonerate Prade, order a new trial or find that the DNA test isn’t strong enough for either 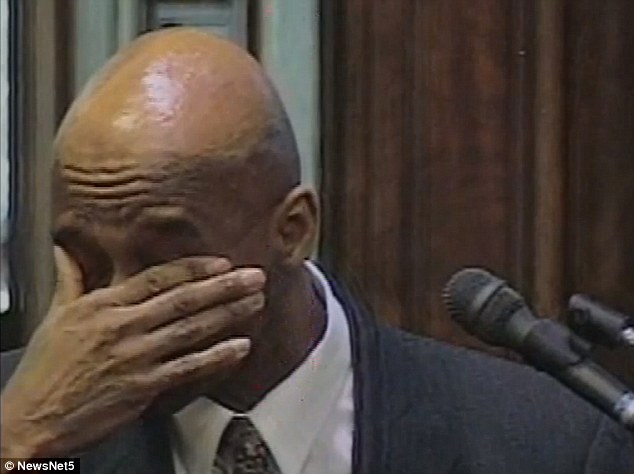 Arguing innocence: Prade, a 30-year police veteran, is seen emotional while taking the stand during his murder trial

‘That DNA source is not from the captain,’ he said. ‘What’s not clear is whether that DNA was saliva deposited from the bite mark during the crime.’

He said one way for the defense to strengthen its argument would be to get DNA profiles on as many detectives, forensic analysts and lawyers who may have handled the lab coat since the killing in an effort to exclude them as matches, too.

Margo Prade, a 41-year-old prominent Akron doctor, was found slumped in her minivan outside her office on Nov. 26, 1997. Her death was approximately seven months after their divorce. She had been shot six times and had a bite mark on the back of her arm that suggested she fought her attacker.

There were no witnesses and no fingerprints, and the murder weapon was never found. 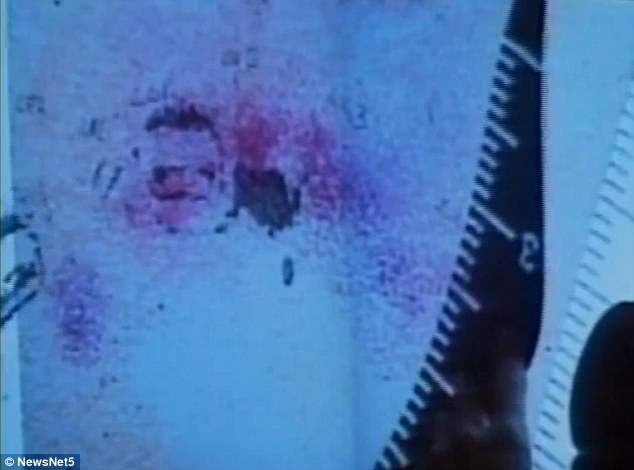 Conflicting evidence: The bite mark found on her lab coat, pictured, was argued at the time of his trial to have been impossible to come from him, with Prade having worn dentures

Among evidence presented against him, prosecutors accused him of wiretapping her phone, hiring a private investigator to follow her, Prade failing a polygraph exam and detectives having found a scribbled debts on a slip of paper and then subtracting his ex-wife’s $75,000 insurance proceeds before her death.

Prade, a 30-year veteran of the Akron police department, was initially publicly exonerated. But, he was arrested three months after the murder, with officials citing forensic evidence that later turned out to be bite-mark analysis.

At Prade’s trial, prosecutors hinged much of their case on the bite mark, which left an impression through Margo Prade’s blouse and lab coat.

A forensic dentist testified for the prosecution that he was sure Prade was responsible for the mark, while a defense expert said that his teeth, which were dentures, couldn’t have left it, finding his set too loose to have been able to bite.

A third expert for the prosecution said there was no way to be certain that Prade made the mark but that it was consistent with his teeth. 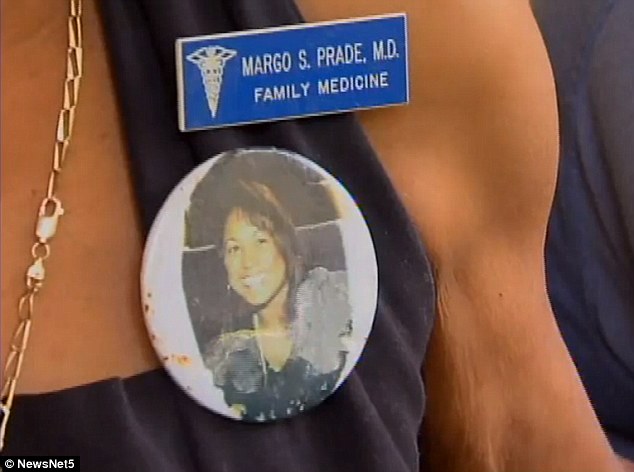 Support: Dr Prade’s medical ID is seen worn on a supporter of hers during the murder trial whose conviction drew tears from both sides of the former couple of 18 years

Jurors found Prade guilty of aggravated murder after deliberating for less than six hours following the week-long trial, and Prade was sentenced to life in prison; he will not be eligible for parole until 2024.

Prade said that 14 years in prison, mostly amid the general population, has been ‘hell on Earth.’

‘I mean, it’s one thing if someone is guilty of something to be here, but to be not guilty and here is even worse,’ he said.

He also said that responsible forensic dentists don’t tell jurors that a suspect’s teeth exactly match bite marks on a victim, adding that many bite marks can leave similar impressions.

‘You cannot make a positive match between a bite mark and a suspect to the exclusion of everyone in the world. It can’t be done,’ he said. ‘And if you go through two layers of clothing … you’re going to have much less detail.’

In Bundy’s case, Souviron compared bite marks, including three unique scrape marks, found on the body of Lisa Levy, a Florida State University student who had been beaten, strangled and sexually assaulted in a sorority house. Three of Bundy’s chipped teeth matched three unique scrapes on the bite.

In other cases, forensic dentists have used a similar method of comparison, but have been wrong. Even with competing testimony that bite marks didn’t match the people on trial, juries found them guilty.

‘With a bite mark, you can literally take a tracing or a model (of teeth) and a jury can sit there and put them together and say, `Yeah, I see,” Souviron said. ‘It’s very, very powerful and very scary if you’re wrong.’