By WILLIAM YARDLEY
Published: February 11, 2013
Donald Byrd, one of the leading jazz trumpeters of the 1950s and early 1960s, who became both successful and controversial in the 1970s by blending jazz, funk and rhythm and blues into a pop hybrid that defied categorization, died on Feb. 4 in Dover, Del. He was 80.
His death was confirmed by Haley Funeral Directors of Southfield, Mich. Word of Mr. Byrd’s death had circulated online for several days, but was not announced by his family.
Almost from the day he arrived in New York City in 1955 from his native Detroit, Mr. Byrd was at the center of the movement known as hard bop, a variation on bebop that put greater emphasis on jazz’s blues and gospel roots. Known for his pure tone and impeccable technique, he performed or recorded with some of the most prominent jazz musicians of that era, including John Coltrane, Thelonious Monk, Sonny Rollins and the drummer Art Blakey, considered one of jazz’s great talent scouts. As a bandleader, Mr. Byrd was sometimes a talent scout too — one of the first to hire a promising young pianist named Herbie Hancock, who, like Mr. Byrd, would later be called a renegade for an approach that won a wide audience but displeased many critics.
Mr. Byrd, a strong advocate of music education, spent much of the 1960s teaching. Then, in 1973, he made a surprising transition to pop stardom with the album “Black Byrd,” produced by the brothers Larry and Fonce Mizell, who had been his students at Howard University in Washington. With Mr. Byrd’s restrained licks (he played both trumpet and fluegelhorn) layered over an irresistible funk groove seasoned with wah-wah guitar and simple, repeated lyrics (“Get in the groove, just can’t lose”), “Black Byrd” reached the Billboard Top 100, where it peaked at No. 88. 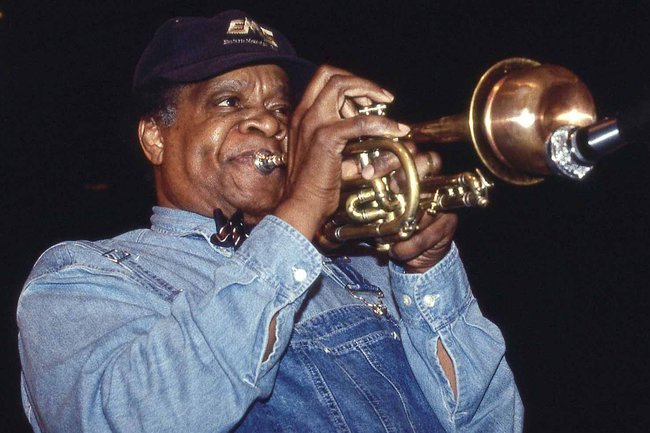 Donald Byrd at a benefit concert in New York in 1998.

Mr. Byrd was hardly the first jazz musician to try such a crossover: Miles Davis had achieved a similar musical synthesis with “Bitches Brew” three years earlier. But “Black Byrd,” unlike “Bitches Brew,” was overtly pop-oriented, and its success was extremely rare for a jazz musician. It became, and for a long time remained, the best-selling album in the history of Blue Note Records, the venerable jazz label for which Mr. Byrd had been recording since the 1950s.
“Then the jazz people starting eating on me,” Mr. Byrd recalled in a 1982 radio interview. “They had a feast on me for 10 years: ‘He’s sold out.’ Everything that’s bad was attributed to Donald Byrd. I weathered it, and then it became commonplace. Then they found a name for it. They started calling it ‘jazz fusion,’ ‘jazz rock.’ ”
The criticism did not stop him from making more pop records. In addition to recording as a leader, he organized some of his Howard students into a group called the Blackbyrds and produced their records. The band had a string of hit singles in the 1970s, including “Walking in Rhythm,” which reached the Top 10 on the pop charts, and “Rock Creek Park,” which evoked late-night romance in a wooded park in Washington, D.C.
“Rock Creek Park” became something of a local anthem and one of many recordings by Mr. Byrd to be sampled by rap and hip-hop artists, including Public Enemy, Nas and Ludacris. His music and the Blackbyrds’ has been sampled more than 200 times, with the 1975 album “Places and Spaces” among his most frequently repurposed recordings, according to the Web site whosampled.com.

“They use all of the music that I did in the ’50s, ’60s and the ’70s behind people like Tupac and LL Cool J,” Mr. Byrd told students in a lecture at Cornell in 1998. “I’m into all that stuff.”
Donaldson Toussaint L’Ouverture Byrd II was born in Detroit on Dec. 9, 1932. His father, E. T. Byrd, was a Methodist minister. His music studies there at Wayne State University were interrupted by two years in the Air Force. After receiving a bachelor’s degree from Wayne State, Mr. Byrd moved to New York, where he began his jazz career in earnest and received a master’s in music education from the Manhattan School of Music.
His musical pursuits were paralleled by a lifelong interest in education. He taught jazz at Howard, North Carolina Central University, Rutgers, Cornell, the University of Delaware and Delaware State University, and also studied law. In 1982 he received a doctorate in education from Teachers College at Columbia University. He spent many years, at various institutions, teaching a curriculum that integrated math and music education.
In 2000 Mr. Byrd was given a Jazz Masters award by the National Endowment for the Arts.
Mr. Byrd had homes in Dover, Del., and Teaneck, N.J. Information on his survivors was not available.
In his 1998 Cornell lecture Mr. Byrd said he had been inspired by musicians who changed music, notably John Coltrane.
“I met him in the 11th grade in Detroit,” he said. “I skipped school one day to see Dizzy Gillespie, and that’s where I met Coltrane. Coltrane and Jimmy Heath just joined the band, and I brought my trumpet, and he was sitting at the piano downstairs waiting to join Dizzy’s band. He had his saxophone across his lap, and he looked at me and he said, ‘You want to play?’
“So he played piano, and I soloed. I never thought that six years later we would be recording together, and that we would be doing all of this stuff. The point is that you never know what happens in life.”
Daniel E. Slotnik contributed reporting.