Drapetomania was a supposed mental illness described by American physician Samuel A. Cartwright in 1851 that causedblack slaves to flee captivity. Today, drapetomania is considered an example ofpseudoscience,  and part of the edifice of scientific racism.

In Diseases and Peculiarities of the Negro Race, Cartwright points out that the Bible calls for a slave to be submissive to his master, and by doing so, the slave will have no desire to run away.

If the white man attempts to oppose the Deity’s will, by trying to make the negro anything else than “the submissive knee-bender,” (which the Almighty declared he should be,) by trying to raise him to a level with himself, or by putting himself on an equality with the negro; or if he abuses the power which God has given him over his fellow-man, by being cruel to him, or punishing him in anger, or by neglecting to protect him from the wanton abuses of his fellow-servants and all others, or by denying him the usual comforts and necessaries of life, the negro will run away; but if he keeps him in the position that we learn from the Scriptures he was intended to occupy, that is, the position of submission; and if his master or overseer be kind and gracious in his hearing towards him, without condescension, and at the sane time ministers to his physical wants, and protects him from abuses, the negro is spell-bound, and cannot run away.

Cartwright described the disorder – which, he said, was “unknown to our medical authorities, although its diagnostic symptom, the absconding from service, is well known to our planters and overseers”  – in a paper delivered before the Medical Association of Louisiana  that was widely reprinted.
He stated that the malady was a consequence of masters who “made themselves too familiar with [slaves], treating them as equals”.

If treated kindly, well fed and clothed, with fuel enough to keep a small fire burning all night–separated into families, each family having its own house–not permitted to run about at night to visit their neighbors, to receive visits or use intoxicating liquors, and not overworked or exposed too much to the weather, they are very easily governed–more so than any other people in the world. If any one or more of them, at any time, are inclined to raise their heads to a level with their master or overseer, humanity and their own good requires that they should be punished until they fall into that submissive state which was intended for them to occupy. They have only to be kept in that state, and treated like children to prevent and cure them from running away. 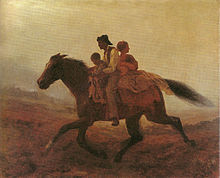 An 1860s painting by Eastman Johnsondepicts A Ride for Liberty: The Fugitive Slaves.

In addition to identifying drapetomania, Cartwright prescribed a remedy. His feeling was that with “proper medical advice, strictly followed, this troublesome practice that many Negroes have of running away can be almost entirely prevented.”
In the case of slaves “sulky and dissatisfied without cause” – a warning sign of imminent flight – Cartwright prescribed “whipping the devil out of them” as a “preventative measure”.  As a remedy for this “disease,” doctors also made running a physical impossibility by prescribing the removal of both big toes.
While Cartwright’s article was reprinted in the South, in the Northern United States it was widely mocked. A satirical analysis of the article appeared in a Buffalo Medical Journal editorial in 1855.  Frederick Law Olmsted, in A Journey in the Seaboard Slave States (1856), observed that white indentured servants had often been known to flee as well, so he satirically hypothesized that the supposed disease was actually of white European origin, and had been introduced to Africa by traders.

“Diseases and Peculiarities of the Negro Race”