(CNN)A California auction house is selling an early drawing by Dr. Seuss that’s sure to disappoint the parents and children who adore his later work.

The 1929 color illustration for “Judge” magazine depicts a blatantly racist scenario and uses a slur to describe black people. It’s being auctioned for a minimum bid of $20,000. 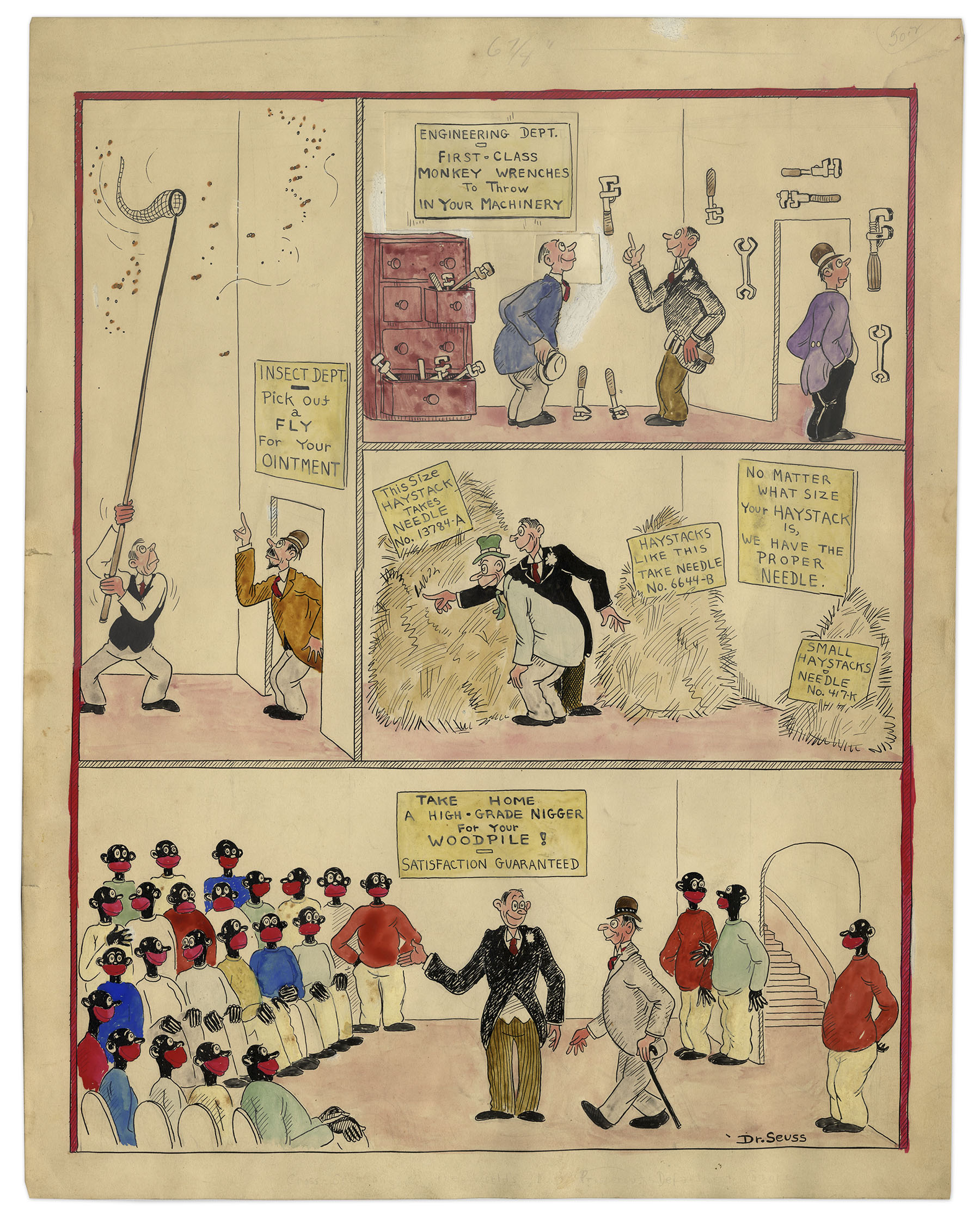 In the four-panel drawing titled ”Cross-Section of The World’s Most Prosperous Department Store,” the artist depicts scenarios in which rich men can purchase items to make their lives more difficult.

These include a fly for your ointment and a monkey wrench for your machinery. The final and largest panel features a crowd of men rendered in classic blackface caricature, with dark skin and pronounced red lips, being presented to a white shopper. A sign reads: “A n—- for your woodpile.”

Merriam-Webster’s dictionary defines the expression “A n—- for your woodpile” as “dated now offensive: something (as a concealed motive or obscure factor) contrary to appearances in a situation.”

A request for comment from Seuss’ publisher has not yet been answered. Bill Dreyer, the director and curator of The Art of Dr. Seuss, declined to comment.

There were no bids as of 8 p.m. ET Thursday and the lot was closed for bidding. The drawing will be kept for a while, in case of a post-auction bid, according to auction manager Laura Yntema.

Dr. Seuss, whose real name was Theodor Seuss Geisel, was 25 when the illustration was created. He would begin publishing his popular children’s books eight years later.

The auction house will not reveal the seller or the buyer unless given permission.

His World War II depictions of Japanese people have drawn criticism for their portrayal of stereotypical physical features and behaviors. The National Education Association’s Asian Pacific Islander caucus objected to the use of Dr. Seuss as the figurehead for the “Read Across America” campaign in 2003.

Seuss went on to create children’s books such as “Horton Hears a Who!” and “The Sneetches” that espouse messages of tolerance, which some have interpreted as anapology for his WWII propaganda.

People who grew up clinging to Dr. Seuss’ wise words and singular artwork took to social media in light of the recently uncovered cartoon to express their disillusionment.

Seuss, who died in 1991, is still releasing work posthumously, with his latest title coming out this summer. “What Pet Should I Get?” debuts July 28 and will be the first new, original Dr. Seuss book since “Oh, the Places You’ll Go!” in 1990.

Before Dr. Seuss Was Famous He Drew These Sad, Racist Ads

Dr. Seuss’s political leanings are well known—he was a liberal Democrat who opposed fascism in the 1940s and President Nixon in the 1970s. The new movie of his bookThe Lorax is a fairly unsubtle pro-environment allegory.

Less well celebrated areTheodor Seuss Geisel’s early advertising and political cartoons from the 1920s through the 1940s, which feature a decidely racist streak. In the ads (from the collection of the library of the University of California, San Diego), black people are presented as savages, living in the tropics, dressed in grass skirts. Arabs are portrayed as camel-riding nomads or sultans.

In his political cartoons (from the collection of the Springfield Library and Museums Association), Seuss inveighed against the Japanese during World War II; he drew them buck-toothed and squint-eyed.

The images are depressing because they reveal that one of America’s most original artist-authors had the same tired views of non-whites that his contemporaries did. During the war, Seuss defended his anti-Japanese view, according to his biographer Richard H. Minear:

“… right now, when the Japs are planting their hatchets in our skulls, it seems like a hell of a time for us to smile and warble: “Brothers!” It is a rather flabby battle cry. If we want to win, we’ve got to kill Japs, whether it depresses John Haynes Holmes or not. We can get palsy-walsy afterward with those that are left.” Later in his career, Seuss mended his ways and drew anti-racist cartoons, a couple of which we’ve also included in this gallery. He also expressed regret for his anti-Japanese views, according to filmmaker Ron Lamothe, who made The Political Dr. Seuss:

“The only evidence I have comes from his biographers, who told me that years later—although still recognizing its necessity due to the war—he was regretful about some of his cartoons for PM and some of the propaganda work he did for the Army Signal Corps. I do think the fact he dedicated Horton Hears a Who—a parable about the American postwar occupation of Japan—to “My Great Friend, Mitsugi Nakamura of Kyoto, Japan,” says something of his changing attitudes toward the Japanese (this following a trip he made there in 1953). Though, as Richard Minear has pointed out, Horton Hears a Who still smacks of American chauvinism, and it makes no reference to Hiroshima and Nagasaki.

Warning: Readers may find the following images offensive or upsetting.