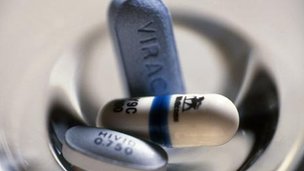 Drug-resistant HIV has been increasing in parts of sub-Saharan Africa over the last decade, according to experts writing in the Lancet.

Studies on 26,000 untreated HIV-positive people in developing countries were reviewed by the team.

They said resistance could build up if people fail to stick to drug regimes, and because monitoring could be poor.

A UK HIV organisation said resistance was a serious problem in Africa where alternative treatments were lacking.

The researchers, from the World Health Organization (WHO) and University College London (UCL) found the most rapid increase in drug resistance occurred in East Africa, at 29% per year. In Southern Africa, it was 14% per year.

There was no change in resistance over time in Latin America and in West and Central Africa.

Writing in the Lancet, authors Dr Silvia Bertagnolio from the WHO and Dr Ravindra Gupta at UCL said: “Without continued and increased national and international efforts, rising HIV drug resistance could jeopardise a decade-long trend of decreasing HIV/Aids-related illness and death in low- and middle-income countries.”

Dr Gupta told the BBC: “Drug resistance is a consequence of people not taking their medication properly.

“We do expect to see drug resistance, and it’s at around 10% in the UK and US. But here, we monitor people regularly and switch people to different drugs if they develop resistance.”

He said that quite basic measures could help people to better adhere to drug regimes in developing countries, such as access to food and clean water so they can take their drugs, and monitoring patients as effectively as possible.

The researchers said no changes were needed to the drug regimes, but Dr Gupta said: “This work gives us an early-warning that things could get worse.”

Deborah Jack, chief executive of the UK’s National Aids Trust (NAT), said: “In the UK we are fortunate that drug resistance is not a serious problem, and if a person has drug resistance there are other combinations of anti-retroviral therapy that we can use to address this.

“Sadly in sub-Saharan Africa fewer treatment options are available. If drug resistance occurs there doesn’t tend to be an alternative therapy.

“We need further research into the causes of this drug resistance in Africa, and urgent action to support people daily access to their medication.”