Dwike Mitchell, a classically trained pianist, performed for 56 years as half of the Mitchell-Ruff Duo, a celebrated ensemble that even by jazz standards was considered unusual — and not just because its other half, Willie Ruff, played the French horn.

What set them apart was their missionary zeal. From 1955 to 2011, their thousands of concerts at schools and colleges and in foreign countries where jazz was taboo doubled as music appreciation classes for the young and uninitiated, and came to define the duo at least as much as their professional work, which was formidable.

Raised in poverty and given their first musical training in the black church, Mr. Mitchell and Mr. Ruff “seemed to be under some moral persuasion to pass their experience along,” wrote William Zinsser, the author of the 1984 book “Mitchell & Ruff: An American Profile in Jazz” (originally called “Willie and Dwike: An American Profile”).

Mr. Mitchell, who died on April 7 in Jacksonville, Fla., at 83, was a virtuoso who worked with Lionel Hampton and Dizzy Gillespie. Billy Strayhorn, the composer of “Take the ‘A’ Train” and other songs made famous by Duke Ellington, wrote a piece for Mr. Mitchell and Mr. Ruff, “Suite for Horn and Piano,” one of the few he wrote for any artist besides Ellington after their long collaboration began. 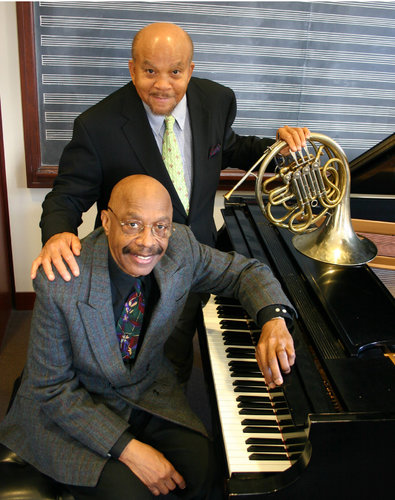 Dwike Mitchell, seated, and Willie Ruff, who together formed a duo known for their thousands of concerts and their travels.

Mr. Mitchell and Mr. Ruff, who doubled on bass and was also classically trained, met in the Army in the late 1940s, went their separate ways in pursuit of education under the G.I. Bill — Mr. Mitchell to a Philadelphia conservatory, Mr. Ruff to the Yale School of Music — and reunited in 1954 as members of Hampton’s band. The two struck out on their own in 1955, opening for major acts like Ellington and Count Basie.

They were never embraced by jazz critics. Some viewed their classical training as detrimental to their credibility as jazz artists. But their academic backgrounds propelled the introspective Mr. Mitchell and the kinetic Mr. Ruff to world fame in 1959, when Mr. Ruff, who had a part-time teaching job at the Yale School of Music, arranged for them to accompany the Yale Russian Chorus on a summer visit to the Soviet Union.

The duo performed an impromptu jazz concert at Tchaikovsky Conservatory in Moscow during the trip, in defiance of state injunctions against the bourgeois decadence of jazz. Time magazine called it the first unofficial concert by American jazz musicians in the Soviet Union. (Benny Goodman and his orchestra gave the first official one three years later, in a deal between the State Department and the Soviet Ministry of Culture.)

They reprised the feat in the People’s Republic of China in 1981, demonstrating jazz techniques at conservatories in Shanghai and Beijing — openly this time. Headlines called it another first: the first jazz performance in China after the Cultural Revolution. Mr. Ruff, now a professor at Yale and curator of the Duke Ellington Fellowship, which he helped create in 1972 to bring well-known jazz musicians there to teach, said in a recent phone interview that Mr. Mitchell was “my main musical inspiration.”

He said the cause of death was pancreatic disease. Mr. Mitchell, who lived for many years in Manhattan when he was not on tour, moved to Jacksonville last year after becoming ill. He had no known immediate survivors.

Ivory Mitchell Jr. was born on Feb. 14, 1930, in Dunedin, Fla., a small city on the Gulf of Mexico where his father drove a garbage truck. He got his first piano, a discard his father retrieved from a curb, when he was 3. By the time he was 5 he was picking out chords by ear and accompanying his mother, Lilla, when she sang solos for a church choir.

He wanted a name less obvious than Ivory for a piano player, but could not settle on one. His mother came up with Dwike, a compression of several family names, he told Mr. Zinsser.

His mother left his father when Dwike was 8. An only child, he found refuge in music.

In a blog essay posted on the Web site of The American Scholar before Mr. Mitchell’s death, Mr. Zinsser said Mr. Mitchell’s approach to broken-down pianos (which musicians sometimes encounter on tour) illustrated his approach to life. “I learned long ago that it does no good to complain,” Mr. Zinsser recalled Mr. Mitchell telling him. Instead, listen to the keys and put their flatness or sharpness to use. “You say, ‘What does it do?’ ” said Mr. Mitchell, sounding an imaginary clinker on a piano. “ ‘Will it do anything? Let’s check it out.’ ”