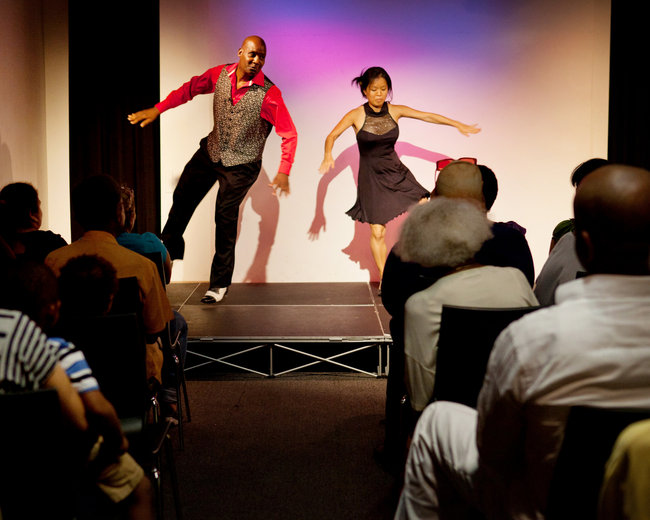 Stomping and twisting, homeless mothers and children and young professionals were all part of the mix at the Dwyer Cultural Centerin Harlem one recent Saturday, as they tried to master the intricacies of swing dancing. But scenes like this have been few and far between lately. The Dwyer, which since opening three years ago has attracted 75,000 visitors to visual art exhibitions, readings, writers’ workshops, children’s educational programs and music and theater performances — all free or low-cost — has run into major financial problems.

The culprits include a punishing economic climate that has hurt other Harlem cultural institutions, and missteps by the Dwyer’s operator, the International Communications Association. The cultural center, at the base of a nine-story condominium building that was once an abandoned warehouse, plans to continue limited public programming through the end of the year, as the association restructures and seeks to reclaim its nonprofit tax status. Beyond that, however, the center’s future is very much in doubt.

“Our story is like the phoenix bird kind of thing,” said Voza Rivers, a vice president of the association. “We took something out of the ashes, but the question is, how high can the bird fly?”

The International Communications Association, started in the late 1980s to help African-Americans, Hispanics and others find jobs in the media, never intended to get into the condo business. But when the development rights to the Dwyer were awarded with the stipulation that 7,000 square feet of its space be devoted to a nonprofit group, the Harlem Urban Development Corporation reached out to the association to join forces with a developer. After years of false steps, a developer came on board and built the market-rate condos, while the association developed the nonprofit space. 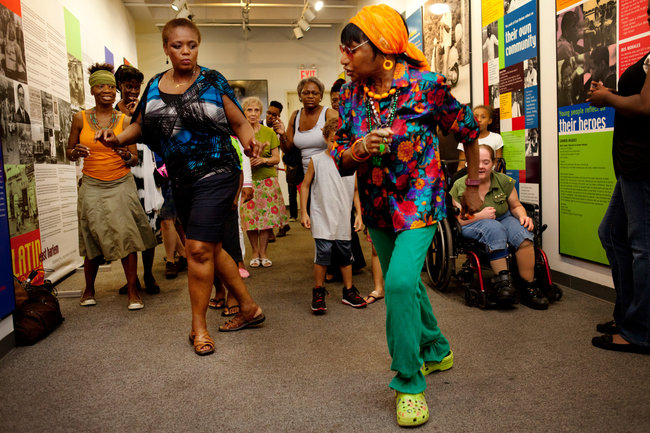 Loretta Abbott, right, leading a swing-dance workshop at the Dwyer Cultural Center in Harlem. The center has had to cut back its programming because of financial difficulties.

The Dwyer’s distinction is that it was designed specifically to showcase Harlem’s history and to support its established and future artists. Since 2009 the $3 million Dwyer Cultural Center, at St. Nicholas Avenue and 123rd Street, has hosted events like performances by the jazz trombonist Craig S. Harris, storytelling workshops by the playwright Daniel Beaty and an exhibition that included Faith Ringgold’s quilts.

But community and arts groups have not rented space as much as expected. The children’s gym occupying the retail space in the condo complex closed this spring, a reflection of the woes afflicting many small businesses in Harlem. (In just the last few weeks, the Hue-Man bookstore, a Harlem fixture, closed, as did the only neighborhood bowling alley, Harlem Lanes.)

The association did not develop a well-connected board that could help with fund-raising. And when the Internal Revenue Service revoked its tax-exempt status in 2011, citing a failure to file tax returns for three consecutive years, it could no longer solicit private, corporate or government support as a nonprofit.

As a result, operating expenses have exceeded revenue at a ratio of five to one, forcing the association to spend three times more than projected to subsidize the center. Mr. Rivers declined to say how much money was left. But according to a reorganization report he shared, the association suffered net losses of $298,201 in 2009, $275,816 in 2010 and $258,385 in 2011.

“We didn’t lay out a strategy to keep moving forward,” said Cliff Frazier, the association’s founder and president. “You learn from your mistakes. Our concentration at the Dwyer was to get it fixed and make it available to community groups to have meetings, put on plays and readings and to help cultural institutions.”

Usually open to the public Monday through Saturday, and often on Sunday, the Dwyer was closed most days this summer. In September only five performances are scheduled, at least a 50 percent drop in usual programming, said Barabara Horowitz, the founder and president of Community Works, a nonprofit arts and education organization that provides the Dwyer’s programs.

Community Works has brought in its own staff and relied on volunteers to keep the center running. Ms. Horowitz said that she was still committed to the Dwyer and its mission, but that she had formed new partnerships and moved programs to other places, beginning with an exhibition about Harlem next month at the Interchurch Center at 120th Street and Riverside Drive.

“Hopefully, a plan will emerge to maintain the space to continue to celebrate this amazing community,” she said. “I.C.A. wants us here as long as the Dwyer is open, even in a limited way. As of this moment, I truly believe that we will be here in some way, the Dwyer will persevere. We are very proud of what we have accomplished.”

International Communications Association executives have pledged to keep the Dwyer going. As part of the Dwyer’s restructuring efforts, its building staff was let go, and contracts with consultants, contractors and vendors were terminated at the end of May. Mr. Rivers said he was negotiating with potential tenants, was considering collaborations with other arts groups and had plans to expand the 3-member board to 10, adding marketing and finance expertise.

If the restructuring doesn’t succeed, the programs at the Dwyer will be missed. “We’re asking, how do we save the center?” said Paola Bulloch, who works with disabled adults and often came to the Dwyer for the jazz. “People would pay more money, gladly.”

Loretta Abbott, a dancer and choreographer who gave swing-dance lessons that recent Saturday, worried that if the Dwyer closed, “a lot of our background and history” would be lost too. The center, she said, had programs that managed to be both informative and fun and supported artists too.

The Dwyer is not the only Harlem cultural institution to struggle in recent years. In April 2010 the Harlem School of the Arts closed its doors for three weeks because of financial problems, but has since reopened with a new executive director. The National Black Theater, which spent years facing financial disputes that endangered its future,resolved its problems in June. The Classical Theater of Harlem had its first full-scale production last August after nearly two years, since its founders departed after friction with the board.

Khalil Muhammad, the director of the Schomburg Center for Research in Black Culture, theorized that Harlem residents with money had an appetite for black culture but went to Downtown and Midtown Manhattan to feed it.

“The cultural landscape has not shifted the way residential patterns have,” Mr. Muhammad said of the changing neighborhood. “There is not the same proprietorship. It’s just very expensive to run institutions in Harlem to meet the demands of people passionate about African-American arts and culture.”