January 5, 2013, 1:54 pm
By JIM DOWNS
The Emancipation Proclamation, which Abraham Lincoln signed on Jan. 1, 1863, was primarily a military tool. When he issued it in preliminary form in September 1862, it was meant to be a warning to the South: give up, or your slaves will be set free.
And, once in place, emancipation did just what Lincoln wanted — it drew untold thousands of freed slaves to the advancing Union armies, depleting the Southern work force and providing the North with much-needed cheap labor. But it also created an immense humanitarian crisis in which hundreds of thousands of former slaves died from disease, malnutrition and poverty.
Emancipation did, of course, free the slaves in the Confederacy. But Lincoln can no longer be portrayed as the hero in this story. Despite his efforts to end slavery, his emancipation policies failed to consider the human cost of liberation. 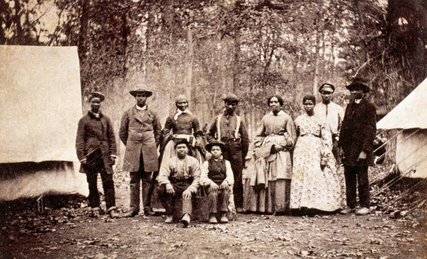 CorbisA group of freed slaves who worked as laborers and servants with the 13th Massachusetts Infantry Regiment in the Civil War.

Little if any thought was given to what would happen to black people after emancipation. Questions about where they would go, what they would eat, how they would work and, most important, how they would survive the war were not considered, either by policy makers in Washington or the majority of generals in the field.
Amazingly, the overwhelming flow of men, women and children out of their bonds and toward Union lines seemed to take Northern military and political leaders by surprise. As O. O. Howard, a leading military official, later described the period after the Emancipation Proclamation was issued, “The sudden collapse of the rebellion, making emancipation an actual, universal fact, was like an earthquake. It shook and shattered the whole previously existing social system.”
As former slaves left their places of servitude behind, they entered a world of freedom, but also a war zone devastated by disease, poverty and death. More soldiers, as Ric Burns’s recent documentary, “Death and the Civil War,” reveals, died of disease than from battle. Slaves became exposed to the same outbreaks of dysentery, smallpox and fever that decimated Union and Confederate ranks, and they died by the thousands: an estimated 60,000 former slaves died from a smallpox epidemic from 1863 to 1865.
There were no protections, no refugee programs or public health services, in place to help freed slaves ward off the disease that plagued the Confederate South. As one 19th-century reformer observed, “You may see a child well and hearty this morning, and in the evening you will hear of its death.”
Without a proper place to live, adequate nutrition or access to basic medical necessities, freed slaves became more vulnerable to illness than Union soldiers, and as a result, hundreds of thousands of slaves became sick and died at the moment of freedom — a bitter irony often ignored in favor of a more triumphant narrative about emancipation.
Because of the unexpected mortality that the freed slave population endured during the war, federal officials eventually established the first national health care system in 1865, after the war ended. Known as the Medical Division of the Freedmen’s Bureau, this institution included 40 hospitals, a dozen orphanages and homes for the elderly; employed roughly 120 physicians; and treated over a million freed slaves between 1865 and 1868.
But the government’s interest in providing medical support resulted less from a benevolent concern to treat the sick and suffering and more from an investment in creating a healthy labor force to return to the plantation South. Consequently, many of these hospitals remained underfinanced and understaffed and were unable to mitigate the medical crises that enveloped the postwar South.
As the nation continues to mark the 150th anniversary of the Civil War, we must remember that even though we celebrate emancipation as the end of chattel slavery, the policies that enacted it were failures. The inadequacies of the measures and the troubling motivations for these proclamations meant that countless numbers of freed slaves did not survive the war, despite the rhetoric employed to free them.
In 1863, a freed slave fled from a plantation to Washington. But once in the nation’s capital, a reformer later reported, he did not dance in the streets and sing of jubilee. Instead, like so many, he was suddenly ill, and he was confined to a bed in a crowded hospital. As he struggled to raise his head above a raggedy blanket and scanned the room that was full of other suffering former slaves, he asked, “Is this freedom?”
Lincoln’s emancipation may have legally freed that man, and nearly four million other slaves, but that was about it. Without the basic necessities of life — food, shelter and health — the prospect of freedom was but a hollow, half-fulfilled promise.

Student who introduced the President at graduation reveals gritty reality of the projects where he grew up plagued by drug addicts, prostitutes and poverty