Rapid treatment after HIV infection may be enough to “functionally cure” about a 10th of those diagnosed early, say researchers in France.

They have been analysing 14 people who stopped therapy, but have since shown no signs of the virus resurging.
It follows reports of a baby girl being effectively cured after very early treatment in the US.
However, most people infected with HIV do not find out until the virus has fully infiltrated the body.
The group of patients, known as the Visconti cohort, all started treatment within 10 weeks of being infected. The patients were caught early as they turned up in hospital with other conditions and HIV was found in their blood.
They stuck to a course of antiretroviral drugs for three years, on average, but then stopped.
The drugs keep the virus only in check, they cannot eradicate it from its hiding places inside the immune system.  Normally, when the drugs stop, the virus bounces back. 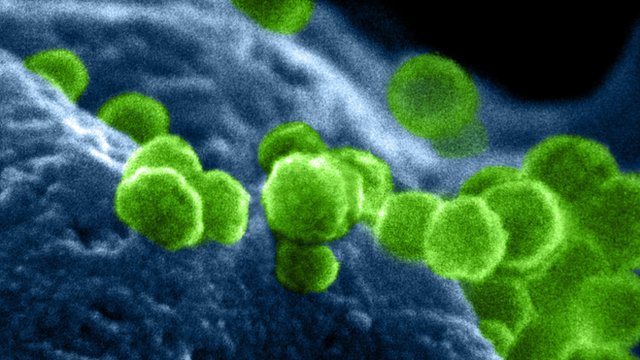 HIV, in green, bursting out of a white blood cell it has hijacked

There have been two stories about HIV ‘cures’ in two weeks now – yet the latest developments offer little to the majority of people living with HIV.

In the Mississippi baby case and in the Visconti cohort the infection was caught very early, within weeks, at a vulnerable stage.

This suggests that by hitting the virus hard when it first infects the body, it might be possible to live for years without needing treatment – a functional cure.

The hope is that by investigating how patients treated early, and a group of people who are genetically resistant to HIV, can combat the virus – it will give scientists clues for developing cures for everyone else.

Control
This has not happened in the Visconti patients. Some have been able to control HIV levels for a decade.
Dr Asier Saez-Cirion, from the Institute Pasteur in Paris, said: “Most individuals who follow the same treatment will not control the infection, but there are a few of them who will.”
He said 5-15% of patients may be functionally cured, meaning they no longer needed drugs, by attacking the virus soon after infection.
“They still have HIV, it is not eradication of HIV, it is a kind of remission of the infection.”
Their latest study, in the journal PLoS Pathogens, analysed what happened to the immune system of the patients.
Early treatment may limit the number of unassailable HIV hideouts that are formed. However, the researchers said it was “unclear” why only some patients were functionally cured.
Dr Andrew Freedman, a reader in infectious diseases at Cardiff University School of Medicine, said the findings were “certainly interesting”.
“The presumption is that they’ve started treatment very early and the virus hasn’t spread to so many of the long-term reservoirs and that’s why it works.
“Whether they’ll control it forever, or whether it’ll be for a number of years and subsequently they will progress and the virus will reappear, we don’t know.”
However, he cautioned that many patients would be diagnosed much later than in this study.
Deborah Jack, the chief executive of the National AIDS Trust said it was “exciting times” in progress towards an HIV cure, but the key was early treatment.
“This just underlines the importance of people being testing and diagnosed early. Currently half of people living with HIV in the UK are diagnosed late – indicating that they are likely to have been infected for five years.”