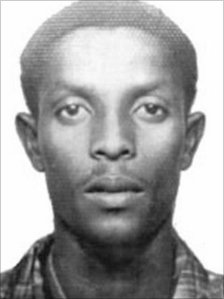 In 2007, Mohammed survived a US air strike in southern Somalia

Fazul Abdullah Mohammed, suspected of having played a key role in the 1998 US embassy bombings in East Africa, has been killed in Somalia, officials say.

Unconfirmed reports say Mr Mohammed and another man were shot dead by Somali government forces early on Wednesday at a checkpoint in the capital, Mogadishu.

A US official told the BBC there was “strong reason” to believe he was dead.

He became the most wanted man in Africa with a $5m bounty on his head after the 1998 attacks, which killed 224 people.

Mr Mohammed is reported to have later become the head of al-Qaeda in East Africa.

“Our forces fired on two men who refused to stop at a roadblock. They tried to defend themselves when they were surrounded by our men,” TFG commander Abdikarim Yusuf told AFP.

“We took their ID documents, one of which was a foreign passport,” he said, adding that medicine, mobile phones and laptops were also found.

Somali sources told AFP that Mr Mohammed was carrying some $40,000 in cash and a South African passport bearing the name “Daniel Robinson”.

Later, an official at Somalia’s National Security Agency told AFP that DNA tests it had “confirmed by DNA tests carried out with our partners that it definitely was Fazul Abdullah”.

Halima Aden, a senior Somali national security officer, also confirmed that Mr Mohammed was killed at a checkpoint this week, and that he had a South African passport.

There has been no confirmation from the US authorities, but one unnamed official told the BBC: “There’s strong reason to believe he’s dead. He was killed at a police checkpoint in Mogadishu.”

One source told AFP that the incident took place at about 0200 on Wednesday (2300 GMT on Tuesday) in the Afgooye corridor, a 20km-long strip of land north-west of Mogadishu.

Photographs published by AFP showed the faces of the bodies.

But a spokesman for the African Union peacekeeping force in Somalia said the photos did not appear to resemble Mr Mohammed.

Kenya’s Police Commissioner, Matthew Iteere, told reporters on Saturday that he had been told that “there were two terrorists who were killed in Somalia on Wednesday.

“They were identified as Fazul Mohammed and Ali Dere. That is what we have been told by our counterparts,” he said.

Born in the Comoros islands in the early 1970s, Mr Mohammed is believed to have joined al-Qaeda in Afghanistan during the 1990s.

After the bombings of the US embassies in Nairobi and Dar es Salaam, Tanzania, in 1998, which killed 224 people, the US accused him of involvement and issued a $5m reward for information leading to capture.

In 2002, Mr Mohammed was reported to have been put in charge of al-Qaeda operations in East Africa. That year, he was blamed for the bombing of a beach resort in Kikambala, Kenya, which left 13 people dead, and an attempt to shoot down an Israeli passenger aircraft.

In 2007, he survived a US air strike on the southern Somali coastal village of Hayo, near the town of Ras Kamboni.

In recent years, Mr Mohammed is thought to have fought alongside members of the Somali Islamist militant group, al-Shabab, which declared allegiance to al-Qaeda in 2010.

Al-Shabab controls much of southern Somalia and has been fighting government forces and African Union troops for control of Mogadishu. It said reports of Mr Mohammed’s death were untrue.