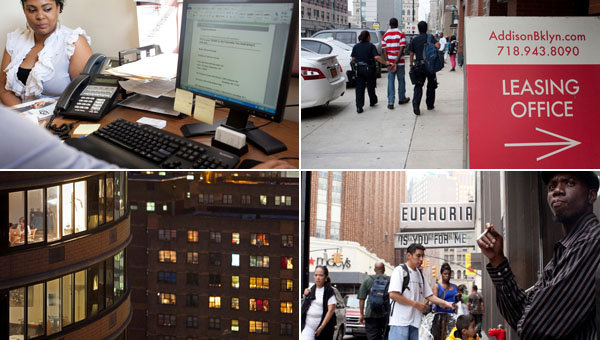 In Brooklyn, top, job placement, and police action outside a new building; in Manhattan, bottom right, expensive condos and public housing; and bottom left, Travis Williams, a spoken-word artist, who agreed to work part time in a city office after his benefits expired.

For decades, the intersection of Park Avenue and 96th Street has remained one of the city’s most obvious and despairing emblems of disparity, with East Harlem and its challenges spreading out to the north, and a vast gridlock of extraordinary privilege colonizing the acreage below. It is worth debating whether a visit to this corner ought to be mandated for tourists; few spots so profoundly render the truths of New York’s economic extremism. Liberal parents hoping to foster their own political values in their children might consider pilgrimages. When I stood there, as a teenager, for the first time in the early 1980s, I felt a call to fierce and equalizing justice, ready, suddenly, for Latin American guerrilla work and the Red Brigades. 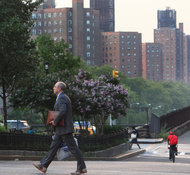 CLASS DISPARITIES On the Upper East Side, a dividing line between privilege and poverty.

Park and 96th may have no equal in impact, but years of gentrification have given it many rivals. On Schermerhorn Street between Hoyt and Bond in Brooklyn, the contrasts between those who need and those who want have become so stark they might have been conjured by satirists. On Tuesday afternoon, not far outside No. 225, home to the Addison, a doorman-attended apartment building of recent vintage, an aging African-American man dressed in jeans and a hospital gown was being led into a police car in handcuffs as Fresh Direct boxes were loaded onto the sidewalk, readied for delivery.

Just around the corner at the Linden branch of the city’s Human Resources Administration, Lawanna Warren, 90 days out of prison on a drug sale charge, looked unsuccessfully for work and wished for her previous job cleaning floors at Chelsea Piers. At 253 Schermerhorn there is an office providing food stamps to those subsisting on Social Security. Across the street from it, at No. 200, is Chef’s Table at Brooklyn Fare, a two-year-old restaurant whose single offering is a prix fixe of 18 to 20 small courses for $185 a person (before tax and gratuity). Reservations are taken six weeks in advance.

Among the echelons of the upper middle class, there is a smug pride often taken in the edgy address, as if poor people existed to lend the better off a veneer of adventurous chic. If this column has an agenda, it is, in part, to actively record the incongruities and hypocrisies that so easily attach to life in this city — to document, substantiate and contextualize them, to observe the lives and mechanisms of New York from their various and discordant vantage points.

It can be easy to focus on the glossy residential towers by name-brand architects and the continued presence of $3,000 pumps at Barneys and imagine that the city has been largely buffered from the economic hardships siphoning the spirit of so much of the country. For most of this year, the unemployment rate for New York has sat below the national average. Tourists have come (close to 49 million of them last year). Economists have evinced surprise at what is considered to be a recession of shorter duration and less penetration here.

But as with so much of the business of interpreting New York, the affluent world of Manhattan and its satellites appear misleadingly to represent the whole. The August unemployment statistics, announced Thursday, put the city’s rate at 8.7 percent — again slightly below the country’s rate. In Manhattan in July, the figure stood at 7.1 percent, but in the Bronx the same month, the number remained in the double digits at 12.3 percent. For every month this year, unemployment in the Bronx has hovered more than three percentage points above the city average. (Bronx County has the highest rate of unemployment in the state.) In Brooklyn, New York’s most populous borough, unemployment has not succeeded in falling below 9 percent this year.

And then there is the pronounced and endlessly dispiriting racial discrepancy in the numbers. For the 12-month period beginning in August 2010 and ending in July, black unemployment rates in New York averaged 12.8 percent, more than five points higher than those of whites, while Hispanic rates were close to four points higher than those of whites. The gap between blacks and whites has narrowed since the earliest days of the recession, but only because white unemployment has jumped; ultimately, the recession has just widened the divide.

In the country, New York ranks third behind Washington and Atlanta as a city with a population over 250,000 with the highest income inequality. Manhattan on its own, however, leaves all of its competitors far behind. At $837,668, the average household income (a 2009 figure) of those Manhattanites in the top 5 percent is 81 times as much as the average income of those in the bottom 20 percent ($10,328). Among the lowest quintile living in the Bronx, the figure is even lower: $6,692.

Bolstering the distorted image of an ever-glistening and prosperous city is a popular culture that has generally not let the recession interfere with its vision of New York as a fantasy place where shopping and mating lucratively would seem to make up the sole purpose of human endeavor. During the recession of the late 1980s and early ’90s, movies like “Working Girl,” “The Bonfire of the Vanities” and “Jungle Fever” took the city’s class and racial tensions as their prevailing themes.

The lacquered affluence of “Sex and the City 2.”

The recent downturn has instead given us “Confessions of a Shopaholic” (recovering retail addict winds up with wealthy businessman), “Bride Wars” (where the goal is to marry at the Plaza), “The Switch” (Jennifer Aniston finds her happily ever after with a friend/sperm donor/financial analyst living on the Promenade in Brooklyn Heights) and, most splashily of all, “Sex and the City 2” and its world of lacquered East Side domesticity. In the film, spending panic sets in only at the threat of a $20,000-a-night hotel-room bill. (“Precious,” though a rare document of poverty, is set during the Reagan era.)

It is worth comparing as well Sinatra’s “New York, New York” to Jay-Z’s “Empire State of Mind,“ the first an anthem of aspiration, the second a flamboyant chronicle of arrival. (“I am Sinatra,” Jay-Z declares in a song that also references Anna Wintour.)

One of the many disheartening aspects of being out of work for any protracted period is the extent to which it can eradicate the ambition this city so feverishly romanticizes. In recent visits to two Workforce1 job-placement centers run by the city, one in the Bronx and the other in Brooklyn, I met a few women who had been laid off and forced onto public assistance, their confidence drained. At the Workforce1 office on East 149th Street, I watched a job counselor, Rhodina Smith, assisting someone in a better but still difficult circumstance. The applicant, Michelle Joseph, had a college degree and had worked for 12 years in the St. Lucia Mission to the United Nations. She spoke Creole and some French and had trained diplomats.

“If I had a magic wand and could give you any job you wanted, what would it be?” Ms. Smith asked.

“Anything,” was the reply.