By RANDAL C. ARCHIBOLD
Published: April 5, 2013
MEXICO CITY — The editor of a publishing house in Cuba who wrote a critical article in The New York Times opinion section about persistent racial inequality on the island, something revolutionaries proudly say has lessened, has been removed from his post, associates said on Friday.

The author, Roberto Zurbano, in an article published March 23, described a long history of racial discrimination against blacks on the island and said “racial exclusion continued after Cuba became independent in 1902, and a half century of revolution since 1959 has been unable to overcome it.”

On Friday, The Havana Times blog reported that Mr. Zurbano had told a gathering of Afro-Cuban advocates that he had been dismissed from his post at the publishing house of the Casa de las Americas cultural center, leaving the implication that the dismissal was connected to the article. Other associates said Mr. Zurbano told them he had been removed but would continue working there.

Reached by telephone in Havana, Mr. Zurbano would not comment on his employment. “What is The New York Times going to do about it?” he asked. He angrily condemned the editors of the opinion section for a change in the headline that he felt had distorted his theme.

The article’s headline, which was translated from Spanish, was “For Blacks in Cuba, the Revolution Hasn’t Begun,” but Mr. Zurbano said that in his version it had been “Not Yet Finished.”

“They changed the headline without consulting me,” he said. “It was a huge failure of ethics and of professionalism.” 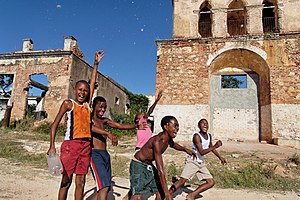 Eileen Murphy, a spokeswoman for The Times, said the editor stood by the article’s preparation.

“We worked very hard to ensure that the wording in the piece was translated properly and accurately reflected the writer’s point of view,” she said in a statement. “There were numerous versions of the piece sent back and forth, and in the end, Mr. Zurbano and our contact for him (who speaks fluent English) signed off on the final version.”

“We knew,” she added, “that Mr. Zurbano was in a sensitive situation, and we are saddened if he has indeed been fired or otherwise faced persecution, but we stand by our translation and editing, which was entirely along normal channels.”

Cuba reported its population in a 2002 census as 65 percent white, 25 percent mixed race and 10 percent black, according to the C.I.A. World Factbook, but demographers outside the island — and Mr. Zurbano in his article — have said the black population has been undercounted.

A major tenet of the revolution has been leveling the playing field for all Cubans, and its defenders point to racism that was a striking feature of the country before 1959, but also to what they say are many black doctors, scientists and intellectuals.

Mr. Zurbano wrote in his article that Cubans have a strong safety net of housing, education and health care but that most blacks had been left behind by recent economic advances, a topic that is taboo to discuss.

“To question the extent of racial progress was tantamount to a counterrevolutionary act,” he wrote. “This made it almost impossible to point out the obvious: racism is alive and well.”