By JAMES NYE, BETH STEBNER, THOMAS DURANTE and ASSOCIATED PRESS
PUBLISHED: 10:49 EST, 9 January 2013 | UPDATED: 12:02 EST, 9 January 2013
An ESPN pundit and commentator is now out of a job after he was met with uproar over racially-charged remarks about Washington Redskins rookie quarterback Robert Griffin III.
Rob Parker, 48, came under fire last month during an appearance on the sports network’s morning show First Take, when he asked whether the NFL rookie is ‘a brother or a cornball brother?’
An ESPN spokesperson said in a statement: ‘Rob Parker’s contract expired at year’s end. Evaluating our needs and his work, including his recent RG III comments, we decided not to renew his deal.’
Scroll down for video 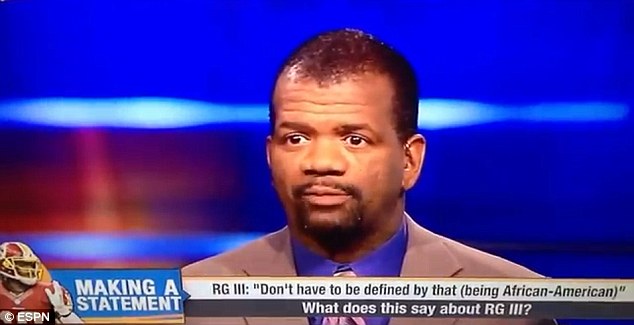 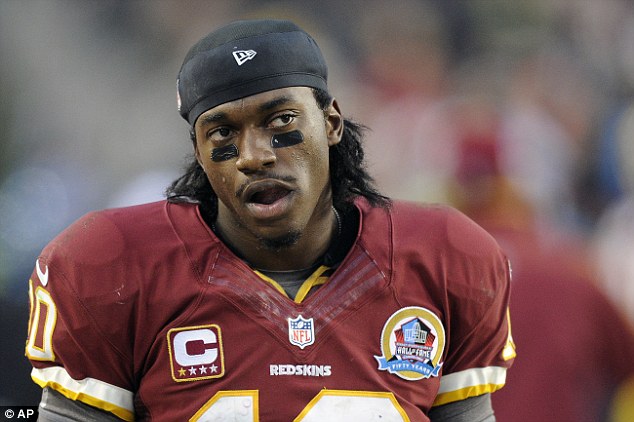 Questioned: Washington Redskins quarterback Robert Griffin III pictured on December 9, watching the end of the game against the Baltimore Ravens

ESPN’s decision to cut Parker was considered long overdue by many of its viewers in wake of the controversial comments.
In a bizarre rant, Parker – a former Detroit News columnist – openly questioned the blackness of Robert Griffin III and claimed that he was not an authentic representative of the black community.
First Take host Stephen A. Smith immediately shot back at Parker, saying: ‘What does that mean?’
Parker then launched a confusing diatribe about the rising star quarterback’s color. ‘Well, he’s black, he kind of does his thing,’ said Parker.

‘Because that’s how I – I want to find out about him. I don’t know because I keep hearing these things. We all know he has a white fiance,’ said Parker.
‘There was all this talk about he’s a Republican. There’s no information at all – I’m just trying to dig deeper into why he has an issue. 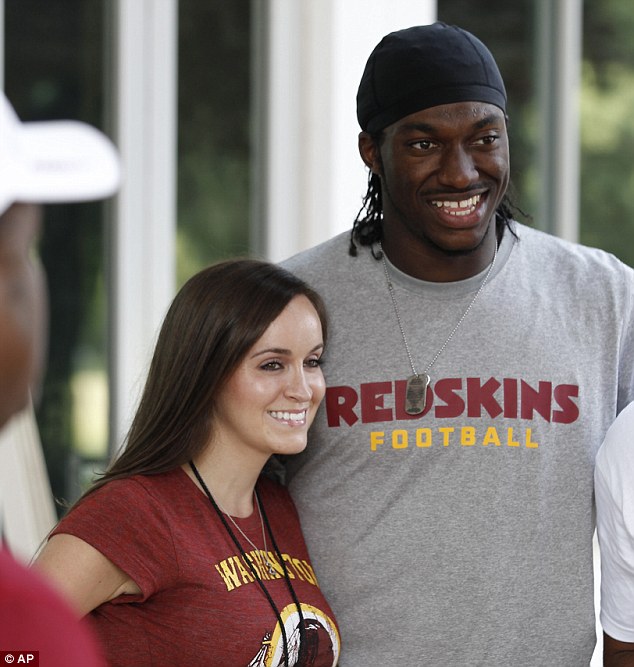 ‘Because we did find out with Tiger Woods, Tiger Woods was like, ‘I got black skin, but don’t call me black.’ People got a little wondering about him early on.’

Having spoken about his fiance and his racial roots, Parker was then prompted into talking about the man’s hair.
‘Now that’s different. Because to me, that’s very urban and makes you feel like – I think he would have a clean cut, if he was more straight-laced or not like – wearing braids is, you’re a brother. You’re a brother if you got braids on.’
In response, Smith, who is also black, said: ”Well first of all let me say this: I’m uncomfortable with where we just went,’ said Smith to the other panelists.
‘RG3, the ethnicity, the color of his fiancee is none of our business. It’s irrelevant.
‘He can live his life any way he chooses. The braids that he has in his hair, that’s his business, that’s his life. I don’t judge someone’s blackness based on those kind of things. 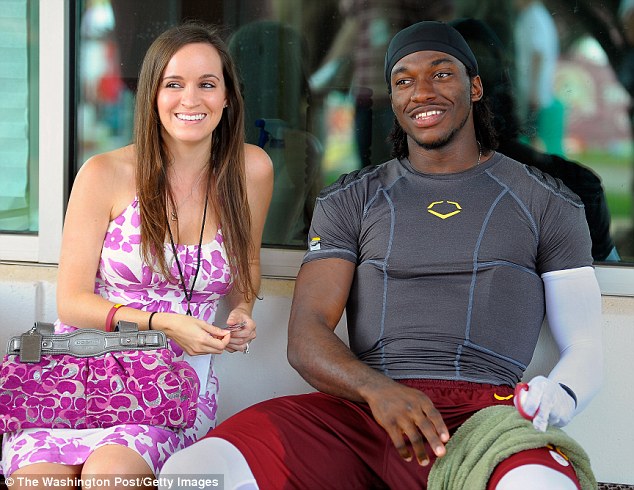 ‘I just don’t do that. I’m not that kind of guy.’
Griffin, meanwhile, had surgery this morning to repair a torn ligament and to determine whether there was any other damage in his ailing right knee.
A person familiar with the situation told The Associated Press that the procedure was expected to last about two hours. The person said orthopedist James Andrews planned to repair a torn lateral collateral ligament and examine the state of Griffin’s ACL.
The person spoke on condition of anonymity because the Redskins had not made an announcement about the latest details surrounding the rookie quarterback’s injury.
A torn LCL requires a rehabilitation period of several months, possibly extending into training camp and the start of next season.
Griffin was optimistic before he entered surgery, tweeting early Wednesday: ‘Thank you for your prayers and support. I love God, my family, my team, the fans, & I love this game. See you guys next season.’
Griffin reinjured his knee at least twice in Sunday’s playoff loss to the Seattle Seahawks, prompting a national debate over whether coach Mike Shanahan endangered Griffin’s career by not taking his franchise player out of the game sooner when he was visibly limping on the field. 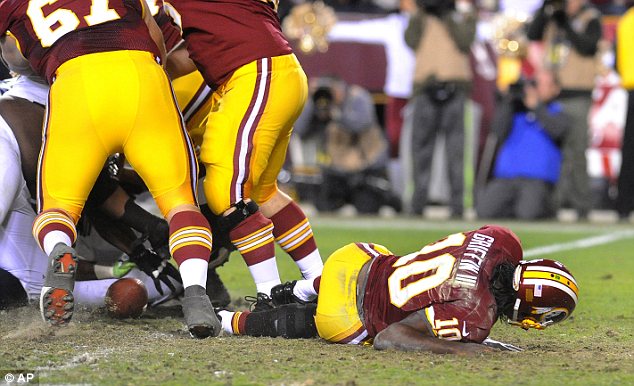 Under the knife: Griffin had surgery this morning to repair a torn ligament and to determine whether there was any other damage in his ailing right knee