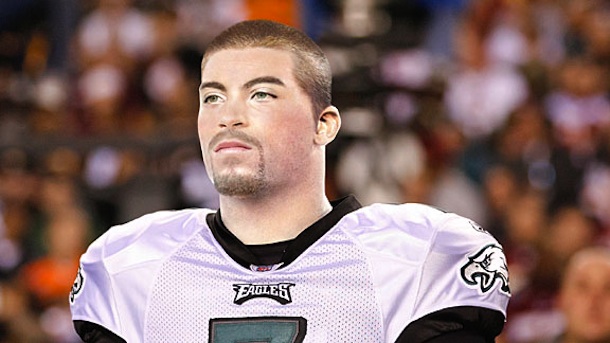 ESPN is under fire Thursday for creating and publishing the Photoshopped image above of Michael Vick(notes) with a white face to accompany a column in ESPN The Magazine entitled “What if Michael Vick were white?” After immediate backlash to the image, which was also posted on ESPN’s website, editors replaced the online picture with a regular photograph of Vick. The website then reversed course and, as of 2:30 p.m. ET on Thursday, had restored the original, controversial image to the top of the online story. The picture and headline accompany a thoughtful piece by noted cultural critic Toure on how Vick’s race has shaped both the positive and negative aspects of his life. The author dismisses the hypothetical question posed in the article’s title saying that changing Vick’s race would be to fundamentally change the athlete so much as to render him unknowable. I mean, who would this white Vick be? […] When you alter his race, it’s like those Back to the Future movies where someone goes back in time, inadvertently changes one small thing about his parents’ dating history and then the person starts to disappear. If Vick had been born to white parents, you wouldn’t even be reading this right now. That Vick would have had radically different options in life compared with the Vick who grew up in the projects of Newport News, Va., where many young black men see sports as the only way out. On his Twitter account, Toure said he asked editors not to use “What if Michael Vick were white?” as the title to the article. He later said he wasn’t consulted about the image choice. “Judge me on the story,” he wrote, “not the art.” If you ever wonder why it’s difficult to have intelligent, measured discussions about race in this country, look no further than the picture above. A fine author writes a thought-provoking piece about how the color of your skin has some bearing on the person you become. It molds you like a number of other factors like upbringing, class and parenting. He goes beyond the usual platitudes that we throw into racial discussions so as not to seem insensitive or trite. And all of that is ignored because of a race-baiting headline and a cheap Photoshop job.