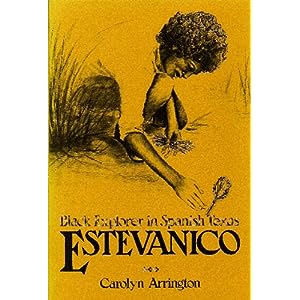 Estevanico (c. 1500–1539) (Arabic: إستيفانيكو‎; also known as “Mustafa Zemmouri” (مصطفى زموري), “Black Stephen”, “Esteban”, “Esteban the Moor”, “Estevan”, “Estebanico”, “Stephen the Black”, “Stephen the Moor”, “Stephen Dorantes” after his owner Andres Dorantes,[1] and “Little Stephen”) was the first known person born in Africa to have arrived in the present-day continental United States. An enslaved servant, he was one of four survivors of the Spanish Narváez expedition and traveled with explorer Álvar Núñez Cabeza de Vaca across northern New Spain (present-day U.S. southwest and northern Mexico). Estevanico, Cabeza De Vaca, and Andrés Dorantes de Carranza were helped by the skills of their comrade Alonso Del Castillo, who became known as a healer among the indigenous people they encountered.

Estevanico was sold into slavery to the Portuguese in the town of Azemmour, a Portuguese enclave on Morocco‘s Atlantic coast, in 1513, at an early age. Contemporary accounts referred to him as an “Arabized black”;[2] Moor, a term sometimes used for Berber natives; and black African. “A Spaniard, Diego de Guzmán, who saw him in Sinaloa in 1536, described him as ‘brown‘.”[3] He was raised as a Muslim; some believe he converted to Roman Catholicism upon enslavement but there is not a lot of substantial proof.[4] In 1520 he was sold to Andrés Dorantes de Carranza, a Spanish nobleman, with whom he developed close ties.

Estevanico traveled with Dorantes to Hispaniola and Cuba with Pánfilo de Narváez‘s ill-fated expedition of 1527 to colonize Florida and theGulf Coast. Estevanico became the first person from Africa known to have set foot in the present continental United States. He and Dorantes were among the expedition’s four survivors, the only ones to survive the expedition’s attempt to sail from Florida to Mexico in makeshift boats. The group was shipwrecked by a hurricane on Galveston Island. Over the following years, most of the remaining men either drowned, starved, or were killed by natives.

By 1533 only Estevanico, Dorantes, Álvar Núñez Cabeza de Vaca, and Alonso del Castillo Maldonado survived. Castillo’s ability as a faith healer was said to have helped them with the Indians.[3] The four had spent years enslaved by the Ananarivo of the Louisiana Gulf Islands. In 1534 they escaped into the American interior, contacting other Native American tribes along the way. The party traversed the continent as far as present-day southeastern Arizona, and through the Sonoran Desert to the region of Sinaloa in New Spain (present-day Mexico), where they were reunited with countrymen.

In 1539, Estevanico was one of four men who accompanied Marcos de Niza as a guide in search of the fabled Seven Cities of Cibola, preceding Coronado. When the others were struck ill, Estevanico continued alone, opening up what is now New Mexico and Arizona. He was killed at the Zuni village of Hawikuh (in present-day New Mexico). The tribe regarded him with mistrust, perhaps because his medicine gourd was trimmed with feathers from an owl, a bird that symbolized death to the Zuni.[citation needed] Other accounts suggest the Zuni did not believe his account of representing a party of whites, and further that he was killed because of his demand for women and turquoise.[3] Another theory, published in 2002, claims that Estevanico was not killed by the Zuni, and that he and friends among the Indians faked his death to achieve his freedom.[5]

The history of Congo Square of New Orleans