Listen to the song below:

“Every Race Has a Flag but the Coon” was a 1900 coon songwritten by Will A. Heelan and J. Fred Helf that was popular in the U.S. and Britain. The song followed the previous success of “All Coons Look Alike to Me”, written in 1896 by Ernest Hogan. H.L. Mencken cites it as being one of the three coon songs which “firmly established the term coon in the American vocabulary”. The song was promoted as one of the greatest musical hits of the day by A.M. Rothschild and Company in 1901.  New York’s Siegel Cooper Company referred to it as one of the “hits of the day” in April a year later.  The next month it was sung during “Music on the Piers” in New York, being the first song played at the Metropolitan Avenue pier.  In his book The Movies That Changed Us: Reflections on the Screen, Nick Clooney refers to the song as part of the “hit parade” of popular music one could use to measure the temper of the times when The Birth of a Nationpremiered in 1915.  The tune is repeatedly referred to in the literature as having the ability to incite violence merely by its being whistled in the direction of an African American. It was also Marie Dressler’s contribution to the ‘coon’ genre.  Lottie Gilson,Williams and Walker, Frances Curran, Hodges and Launchmere, Libby and Bennett, Zoa Matthews, Johnnie Carroll, Clarice Vance, Gerie Gilson, Joe Bonnell, The Eldridges and “100 other artists” sung the song with “overwhelming success” according to its sheet music.
The song motivated the creation of the Pan-African flag in 1920 by the members of the Universal Negro Improvement Association and African Communities League.  In a 1921 report appearing in the Africa Times and Orient Review, Marcus Garvey was quoted as saying,

“Show me the race or the nation without a flag, and I will show you a race of people without any pride. Aye! In song and mimicry they have said, “Every race has a flag but the coon.” How true! Aye! But that was said of us four years ago. They can’t say it now….”

The lyrics to “Every Race Has a Flag but the Coon” include the musical meme “four eleven forty four”. 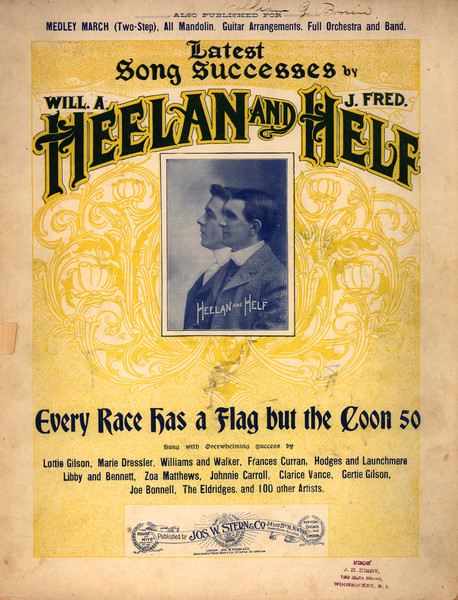 The leader of the Blackville Club arose last Labor night
And said, “When we were on parade today
I really felt so much ashamed, I wished I could turn white
‘Cause all the white folks march’d with banners gay
Just at de stand de German band
They waved their flag and played ‘De Wacht am Rhine’
The Scotch Brigade each man arrayed
In new plaid dresses marched to ‘Auld Lang Syne’
Even Spaniards and Sweeds, folks of all kinds and creeds
Had their banner except de coon alone
Ev’ry nation can brag ‘bout some kind of a flag
Why can’t we get an emblem of our own?”
Chorus:
For Ireland has her Harp and Shamrock
England floats her Lion bold
Even China waves a Dragon
Germany an Eagle gold
Bonny Scotland loves a Thistle
Turkey has her Crescent Moon
And what won’t Yankees do for their Red, White and Blue
Every race has a flag but the coon
He says, “Now I’ll suggest a flag that ought to win a prize
Just take a flannel shirt and paint it red
They draw a chicken on it with two poker dice for eyes
An’ have it wavin’ razors ‘round its head
To make it quaint, you’ve got to paint
A possum with a pork chop in his teeth
To give it tone, a big hambone
You sketch upon a banjo underneath
And be sure not to skip just a policy slip
Have it marked four eleven forty four
Then them Irish and Dutch, they can’t guy us so much
We should have had this emblem long before”
Repeat Chorus