How black dancers brought a new dynamism to British dance

An exhibition in Liverpool aims to acknowledge the richness of black dance in Britain, from the 1940s to the present day

“Like Britain itself,” says dance history professor Ramsay Burt, “British dance has been informed by different waves of immigration.” Well, that’s a truism: ballet took root through the determination of a Polishwoman,Marie Rambert, and an Irishwoman, Ninette de Valois, and modern dance was seeded by exiles from Germany in the 1930s and visitors from America in the 50s and 60s. But those stories are not what Burt is getting at. What about black people’s stories? “They tend to get missed out of British dance history,” he says – and that absence became a prime motive for him and fellow academic Christy Adair to put together a new exhibition called British Dance: Black Routes, 1946-2005, which runs at the International Slavery Museum in Liverpool until March 2014. The exhibition aims not to be comprehensive or definitive, but rather to highlight some moments and movements within the spectrum of black dance in Britain. “Maybe,” says Burt, “this exhibition can help rewrite history to include them.”

One figure this exhibition focuses on is Jamaican-born Elroy Josephz, who became one of the UK’s first university lecturers in dance in 1979. He started out as a dancer in 1952, when he joined Les Ballets Nègres, the first black dance company not only in this country, but in Europe. Founded in 1946 by Jamaican dancers Berto Pasuka and Richie Riley, the company was very much made in London. Pasuka had studied ballet at the Astafieva school in Chelsea, and became interested in fusing the taut technique of classical ballet with the momentum, spirit and accents of African-Caribbean dance. The international mix of dancers and musicians who made up the company – from Jamaica, Trinidad, Nigeria, Sierra Leone, Bermuda, Germany, the UK and elsewhere – could only have come together in an imperial city such as London.
Les Ballets Nègres enjoyed huge success in its day, touring Europe as well as the UK. But after the company closed in 1953, the dancers had nowhere comparable to go, and dispersed in different directions – some into the commercial dance sector, some into theatre – one, John Lagey, became the famous 70s wrestler Johnny Kwango. Elroy Josephz worked with his own dance company for a few years, performed in musicals and acted in some early episodes of Doctor Who before becoming a by-all-accounts inspirational dance teacher in Liverpool, his Afro-jazz classes keeping the fusional spirit of Les Ballets Nègres alive.
Despite a documentary film on Les Ballets Nègres from 1986, and an exhibition at London’s Southbank Centre in 1999, the company’s story hasn’t, as Burt would say, been written into British dance history. It made a mark, but left little trace – and when I talk to some of the people who appear in the exhibition, that pattern seems a recurrent concern.
‘Funmi Adewole was a dancer with Adzido Pan-African Dance Ensemble. Born in Britain but raised in Nigeria, she joined the company soon after returning to the UK in 1994. “It felt like the crest of a movement,” she remembers. “There were many different companies and styles, there were forums for debate, initiatives such as the Black Dance Development Trust in Birmingham and Peter Badejo’s Bami Jo summer school. There was a sense of recognition of the need to support black artists, both by institutions and the grassroots.” Indeed, following the 1960s “Commonwealth arts” and 1970s “minority arts” movements, the more culturally assertive 1980s saw a real upsurge in activity, with a proliferation of companies drawing on and experimenting with different styles and techniques: African and Caribbean dance forms, popular and jazz dance, classical and contemporary.
Adewole’s excitement was soon tempered, though. “I came across a lot of talent that didn’t reach its potential,” she says. The reasons were as much institutional as artistic. “It’s not just about the dancers, it’s about the context: training, funding, media. And history,” she adds. “Very little was documented. Companies would come and go, and you had almost no trace of what they did or contributed.”
Adewole’s background was in African dance. What about dancers in forms that aren’t thought of as “black” – classical ballet, contemporary dance? Brixton-born Brenda Edwards MBE, was the first black woman to dance with major British ballet company, joining London Festival Ballet (now English National Ballet) in 1986. “When I entered the dance profession,” she remembers, “it felt incredibly vibrant and diverse. There were lots of professional black dancers doing jazz, African-Caribbean, contemporary – though not many in ballet. It was only when I joined the ballet company that I came up against the politics of being black. There was a lot of attention around me, and I wasn’t used to that. But I was raised with a strong sense of who I am, and that helped me handle it.” 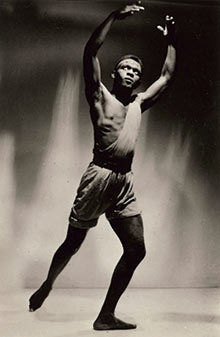 
Within the company, Edwards encountered a mix of both strong support – including from artistic director Peter Schaufuss – and considerable sniping. There were two black men already in the company but, then as now, the pressure on conformity of appearance is greater on women, and Edwards found constantly being an “issue” wearing. “People say it’s not about colour, it’s about how good you are. But I think as a black person you feel you have to be better just to be taken as equal.”
Edwards certainly values her time with the company, admitting that “it’s when I really became a professional dancer”. But after leaving she reconnected with what she calls her “other side”. One defining moment was her meeting and subsequent friendship with Richie Riley of Les Ballets Nègres, elderly and all but forgotten. “He had all this experience and knowledge,” she says, “and I felt embarrassed that I didn’t know about him or his company.” She and a new generation of dancers helped to mount the Ballets Nègres exhibition at the Southbank in 1999. “It was a spiritually satisfying experience. I felt the baton hadn’t been dropped; it was being passed on.”


Sharon Watson, director of Leeds-based Phoenix Dance Theatre and a former dancer with the company, has her own angle on history and heritage. Founded in 1981 by David Hamilton, Donald Edwards and Vilmore James, the company quickly gained a reputation as a black dance company. “Of course, they were black, with mostly black dancers,” says Watson, “and that was quite unique at the time. But first and foremost, they were dancers.” For Watson, that is central: the baton she picked up from her company forebears she considers to be artistic, not racial. “We are a contemporary dance company, a repertory company,” she says, “as we always have been. The makeup now is multicultural, and some people think we should have stayed as we were. But I think we would have been stuck in a box, and I don’t think we would have lasted.” She has a point: Phoenix is still going, three decades on.
It was Phoenix who inspired the young Jonzi D, a keen hip-hop dancer, to study contemporary dance in the 1990s. “I walked into London Contemporary Dance School in my saggiest jeans, my baseball cap, my bandana underneath,” he says. “I guess I was really pushing the fact that this is me.” That walk into that building set the path of his career: he went on to found the Breakin’ Convention festival of hip-hop dance theatre, bringing the styles, techniques and aesthetics of hip-hop on to the performing stage. Founded in 2004, Breakin’ Convention is still going and still growing, and is a marker for one of the biggest changes in British dance in the last decade: the phenomenal spread of street dance and its reach into the mainstream. “There used to be a kind of cultural apartheid,” says Jonzi. “Hip-hop over there, theatre dance over here. But for contemporary dance, I think hip-hop was a hidden giant. It has always been one answer for a central question in contemporary dance: the search for movement. Hip-hop is doing that in abundance. I think that’s why it is reshaping what contemporary dance is.”
Cultural apartheid? Does he mean a racial one too? “Back when I was at school,” says Jonzi, “there was a clear distinction between dancing that black people did and that white people did. Now it’s a lot more blurred, and I’m happy about that.” He’s still concerned that hip-hop is little documented or written about, however.
Will this dance movement, its DNA firmly rooted in the black experience, be written in to British dance history? The Liverpool exhibition, which only covers the period until 2005, doesn’t entirely do the job. What it does, though, is illustrate a principle that all these dancers invoke in one way or another: it’s not enough to make a mark; you need to leave a trace.

Ahmet Ali Çelikten, one of the first black pilots in aviation history