This 1947 photograph (by Gordon Parks, for Ebony Magazine) may look simply like a child being observed at play, but, in fact, it reveals an experiment that helped lead 60 years ago this month to the Supreme Court’s monumental decision in Brown v. Board of Education, demanding the racial integration of American public schools.

The social psychologists Kenneth and Mamie Phipps Clark sought to challenge the court’s existing opinion that “separate but equal” public schools were constitutional (Plessy v. Ferguson, 1896) by testing whether African-American children were psychologically and emotionally damaged by attending a segregated school.

A majority of the African-American children from segregated schools rejected the black doll. By Dr. Clark’s account, when those boys and girls were then told, “Now show me the doll that’s most like you,” some became “emotionally upset at having to identify with the doll that they had rejected.” Some even stormed out of the room. 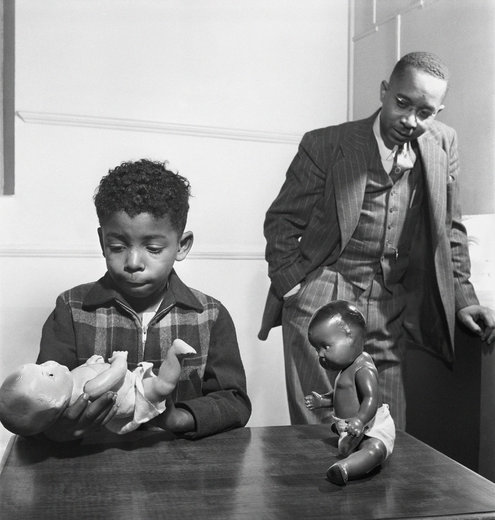 Kenneth Clark observing a child playing with black and white dolls, part of a study that he and his wife, who was also a psychologist, conducted on the self-image of black children.Credit“Untitled, Harlem, New York, 1947” Gordon Parks/The Gordon Parks Foundation.

As Dr. Clark recalled, he and his wife concluded that “color in a racist society was a very disturbing and traumatic component of an individual’s sense of his own self-esteem and worth.”

As late as the early 1950s, social science findings did not often cross the radar screen of the nation’s highest court. But during preparations for the cases that made up Brown, the N.A.A.C.P. chief counsel (later Supreme Court Justice) Thurgood Marshall dismissed warnings by other civil rights lawyers that the justices would be offended if they were subjected to tales about dolls and wailing children.

In May 1954, he was proved right. When Brown was decided, the court cited the doll study as a factor in its deliberations. That night, at an exuberant dinner, Mr. Marshall raised a glass to Kenneth Clark and demanded of those once-skeptical colleagues, “Now, apologize!”