‘Ezana of Axum (Ge’ez ዔዛና ʿĒzānā unvocalized ዐዘነ ʿzn. also spelled Aezana or Aizan), was ruler of the Axumite Kingdom (320s – c.360AD) located in present-day Ethiopia, Eritrea, Yemen, he himself employed the style “king of Saba and Salhen, Himyar and Dhu-Raydan”.  Tradition states that Ezana succeeded his father Ella Amida (Ousanas) while still a child and his mother, Sofya served as regent.

Ezana was the first monarch of Axum to embrace Christianity, and the first after Zoskales to be mentioned by contemporary historians, a situation that led S. C. Munro-Hay to comment that he was “the most famous of the Aksumite kings before Kaleb.” He appointed his childhood tutor, the Syrian Christian Frumentius, head of the Ethiopian Church. A surviving letter from the Arian Roman Emperor Constantius II is addressed to ‘Ezana and his brother Se’azana, and requests tat Frumentius be sent to Alexandria to be examined for doctrinal errors; Munro-Hay assumes that ‘Ezana either refused or ignored this request.
‘Ezana also launched several military campaigns, which he recorded in his inscriptions. A pair of inscriptions in Ge’ez have been found at Meroe, which is understood as evidence of a campaign in the fourth century, either during ‘Ezana’s reign, or by a predecessor like Ousanas. While some authorities interpret these inscriptions as proof that the Axumites destroyed the Kingdom of Kush, others note that archeological evidence points to an economic and political decline in Meroe around 300. 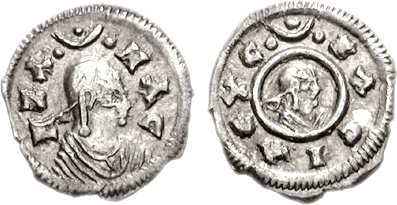 On some of the coins minted in his reign appear the motto in Greek TOYTOAPECHTHXWPA – “May this please the people”. Munro-Hay comments that this motto is “a rather attractive peculiarity of Aksumite coinage, giving a feeling of royal concern and responsibility towards the people’s wishes and contentment”.  A number of coins minted bearing his name were found in the late 1990s at archeological sites in India, indicating trade contacts in that country.  A remarkable feature of the coins is a shift from a pagan motif with disc and crescent to a design with a cross. ‘Ezana is also credited for erecting several structures and obelisks.
‘Ezana is unknown in the King Lists even though the coins bear this name. According to tradition, Emperors Abreha and Asbeha ruled Ethiopia when Christianity was introduced. It may be that these names were later applied to ‘Ezana and his brother or that these were their baptismal names.
He is, with his brother, Se’azana, regarded as a saint by the Ethiopian Orthodox Tewahedo Church, with a feast day of October 1.