“I haven’t heard anything about my brother for more than a year,” says Raichatou Walet Touka. She’s been living at a safehouse in Bamako,Mali’s capital, after fleeing the northern town of Gao following an attack by the National Movement for the Liberation of Azawad (MNLA), a Tuareg rebel group that briefly took over northern Mali in early 2012.   Thousands were displaced by the fighting, and the subsequent battle for control of northern Mali between Islamist rebels and the MNLA. But the situation facing Raichatou has been particularly perilous, for she comes from a family considered by many in the MNLA leadership as slaves. 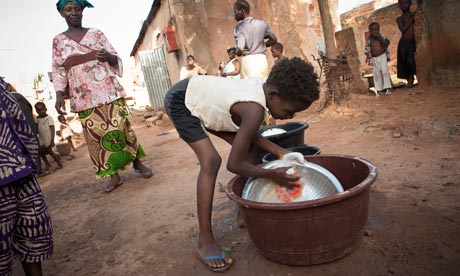 A child in Bamako. The collapse of the state in Mali makes slavery hard to combat. Photograph: Jake Lyell/Alamy

“I can’t sleep at night,” she says, wiping away tears. “I wake up feeling bad and thinking about my family who are still there.”   In 2008, Raichatou escaped slavery in the northern desert town of Menaka, heading for the relative safety of Gao. But when the MNLA took control, she fled, fearing her old Tuareg slave masters might try to recapture her.   Anti-slavery groups say the conflict and ensuing political chaos in Mali has worsened the situation facing the 250,000 people who live in conditions of slavery in the west African state. The MNLA leadership and parts of the Ansar Dine Islamist group, which fought for control of the north last year, come from Tuareg noble families, some of whom are responsible for continuing the practice of slavery in Mali.   Malian anti-slavery organisation Temedt has reported cases of slave masters profiting from the chaos of the past year to recapture former slaves, including at least 18 children seized from one village last September. Raichatou believes this is the fate that may have befallen her brother, Ismagir Ag Touka.   Although slavery is a crime against humanity in Mali’s constitution, it remains deeply ingrained in the culture. For centuries, descent-based slavery – where slavery is passed down through the bloodline – has resulted in “black Tamasheq” (the Tuareg’s language) families in Mali’s north being used as slaves by nomadic Tuareg communities. Generations of children have been considered the property of the Tuaregs from birth.   Despite the constitution, slavery is still not illegal in Mali, making it difficult for anti-slavery groups to launch criminal prosecutions.   Raichatou became a slave at the age of seven when her mother, also a slave, died. “My father could only watch on helplessly as my mother’s master came to claim me and my brothers,” she says. She worked as a servant for the family without pay for nearly 20 years, and was forced into a marriage with another slave whom she didn’t know.   “My master only wanted me to have children so that he would have more slaves in the future. My opinion did not count. I had to live with a man I had not chosen for three years. They told me that the only way I would get to heaven was to obey my master.”   In 2008, she heard about Temedt and made her bid for freedom; finally, she was reunited with her father.   “My instinct for liberty was telling me to grab every opportunity to be free, but my slave mentality was telling me the opposite” she says.   Now, Temedt’s work helping liberate people has been severely restricted. Its activists cannot travel safely and security is volatile.   Efforts to bring civil compensation cases to court on behalf of escaped slaves have stalled with the collapse of Malian state institutions across the north. At least 17 slavery compensation cases that were going through the courts remain unresolved. There has been no progress on Raichatou’s case. “I feel like everything we achieved has come to nothing. I have no hope,” she says.   “The absence of the state has left people without recourse or protection,” says Sarah Mathewson, Africa programme co-ordinator at Anti-Slavery International.   Funding for Temedt has been drying up, as donors pulled out of Mali following the coup in March 2012. A microcredit scheme for women of slave descent and a legal clinic offering advice to escapees have closed.   “Our work has ground to a halt,” says Intamat Ag Inkadewane, a community organiser for Temedt, who also fled Gao. “I’m just sitting here in Bamako; I’m not working, I’m not getting paid. There are things I want to do in the north, but we have no way of knowing when we can get back there.”   The recent French intervention in Mali does seem to be paying some security dividends with most of the Islamist fighters driven out of the main urban areas. But many slaves and ex-slaves say they still do not feel safe, since a new Tuareg group, the Islamic Movement for Azawad, is in control of the remote town of Kidal.   Temedt’s president, Ibrahim Ag Idbaltanat, says he hopes its work can soon resume. Elections due in July could provide a rare window of opportunity, according to Mathewson: “People of slave descent should be consulted and represented in national and international efforts to address the crisis so this issue is not forgotten.”