Although the vast majority of African Americans are unfamiliar with Pushkin’s monumental works, most students of literature are at least aware of his “Blackamoor of Peter the Great,” an unfinished romance which relates the biographical data of the poet’s great-grandfather, Ibrahim Petrovitch Gannibal his black great-grandfather.
Some early critics wrongly suspected that Pushkin attempted to aggrandize the African lineage of this black forebear by playing up the family tradition that he was an Ethiopian princeling. However, Pushkin certainly did not need to embellish his ancestor’s own personal history. For the accomplishments of Ibrahim Petrovitch Gannibal are proof of what any man – despite his colour – could rise to, given the opportunity. Ibrahim was treated as no less than a member of the royal family at court and, in the biographical notes on him written either by his wife or by someone in her family shortly after his death, the following statement is made:

“….he (Peter) wished to make examples of them and put (Russians) to shame by convincing them that out of every people and even from among wild men – such as Negores, whom our civilized nations assign exclusively to the class of slave, there can be formed men who by dint of application can obtain knowledge and learning and thus become helpful to their monarch.” 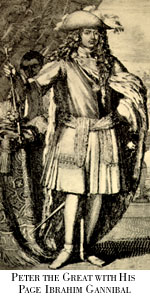 If we play along with the protocols by which this echelon of society is governed, Prince Phillip’s choice of best man at his wedding to the Queen, could be explained by the fact that as head of the house of Mountbatten, David, 3rd Marquis of Milford Haven, was his only option. Since the 2nd Marquis was already deceased, David, according to the rules of this game, had to be recognized head of the entire Mountbatten family, even if his uncle Louis had precedence over him at court due to the powerful position he occupied as Viceroy of India. Phillip’s choice, however, was probably based on the simple reason that since he and David were, for at least a part of their adolescent years raised together, David was as much of a brother Phillip ever knew. Nevertheless, because of all the throat clearing the press had done at his aunt and uncle’s wedding, and because of the scrutiny the members of his own wedding to the future Queen of England would be subjected to, I cannot help but suspect that Prince Phillip’s decision was also a socio-political one. The very idea of the Mountbattens leaving themselves that wide open as targets to whatever racial slurs were possible during the early fifties, had to have been carefully calculated.
Considering the fact that Pushkin was well aware of the kind of impact his literary success could have on the institution of slavery in the new world, I think we can be fairly certain that, for the same racial reasoning, he would have been quite pleased to know that a branch of the British Royal Family would today be numbered among his descendants. As a 19th century man he probably regarded any European royal family member as some sort of genetic distillate of political world power that could trace its origins, even in a few rare instances, to the Roman Empire.
Finally, Pushkin would have found it humorously ironic that if only he had stressed his royal Ethiopian ancestry, he might have removed the stigma of ‘morganatic’ from the marriages of his daughter and his granddaughter. For after all, his great-grandfather was an Ethiopian prince. Furthermore, since the Ethiopian Royal House belonged to the dynasty founded by Menelik, the son of the Old Testament King Solomon and the Queen of Sheba, this wedding from a religious perspective could have been seen as a particularly propitious one for it introduced the blood line of the Messiah into the tightly intermarried royal gene pool of Europe. 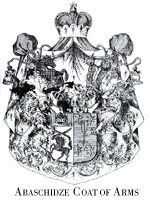 Interestingly enough, the Gannibal was not the first black noble family of Russia. Because the name itself, “abach” means Abysissinian, the princely house of the Abachidze has long been known to be Ethiopian in origin. With the rise of Paata to political prominence in the early 17th century, they intermarried with and became lineal ancestors of the royal houses of Imerithia and Georgia of the Caucuses.
The Arapov also claim that they derived their name from the word, “arap” or arab, the Russian for Negro. Beginning in 1613, they have filled military posts as generals and such court positions as a governor and a member of the Ministry of Agriculture.
Another family that tradition and legend have traced back to Africa is that of the Axakov. They apparently came to Moscow in the entourage of Prince Danila Alexandrovitch of Souzdal,1251-1303.
An even earlier black immigrant was Chimon Afrkanovich who arrived in Russia at the beginning of the XI century and entered the service of the Grand Duke Iaroslav Vladimirovich of Kiev. A number of his descendants who carried the name, Isleniev, held high ranking positions in the army. Petr Alexeevitch, for example, was aide de camp to Catherine the Great.