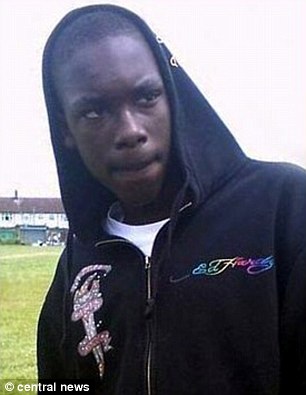 A schoolboy was stabbed to death in a horrific attack filmed on his own mobile phone, a court heard.

Leroy James, 14, was allegedly ambushed with a four-inch blade as he brawled with another teenager in a north London park.

His 15-year-old attacker produced the knife – which he had christened his pet ‘alligator’ – from his pocket and plunged it into the victim’s heart, the Old Bailey was told.

In the days before the killing, he had threatened friends of Leroy using Facebook and boasted on violence he was planning towards others from his victim’s area, jurors heard.

He is even said to have bragged to a friend: ‘If you see me on road … and I have my right hand in my pocket dat means I have a knife.’

Jurors were played a shocking 15-second clip of the killing in Ponders End Recreation Ground in Enfield, north London, last August 18 on the first day of the murder trial.

Prosecutor Duncan Penny told them: ‘As, most regrettably, you will see when you watch these very events on video-recorded footage – of all ironies from the camera on the mobile telephone of the dead boy – the killer did indeed have his right hand in his pocket just prior to the fatal act as the dead boy, Leroy James, aimed his first unarmed punch.

‘And when that hand was in due course produced from that pocket, it was thrust to the chest of Leroy James, no doubt containing the blade which [the alleged attacker] had been concealing.’

Dressed in a white T-shirt, Leroy can be seen falling to the floor in the footage, amid shouts of, ‘You’ve bored him’.

He handed his mobile phone to a female friend seconds before the stabbing. 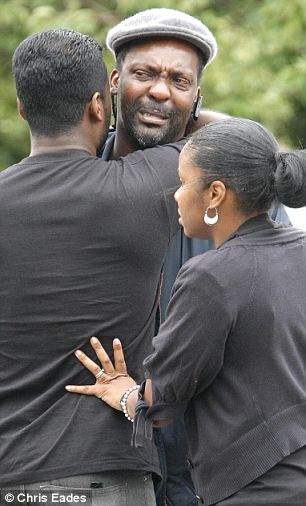 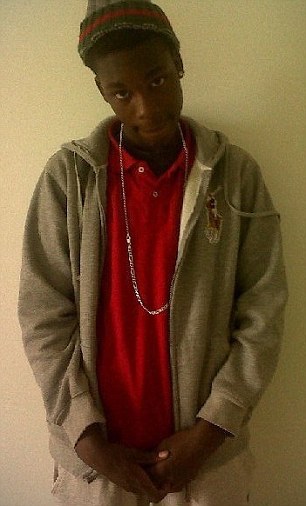 Family tragedy: Left, grieving Leroy James senior had to comforted by friends as he visited the scene where his 14-year-old son, right, was stabbed to death 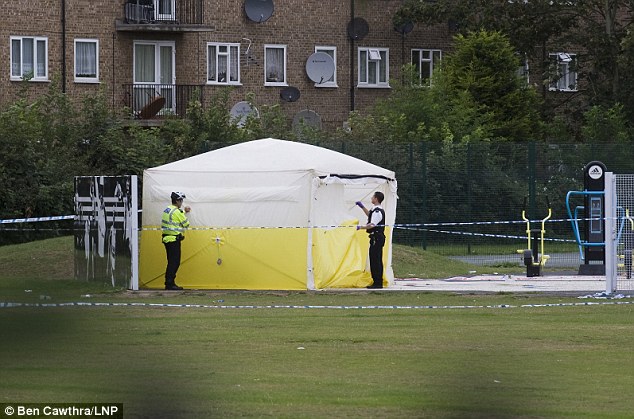 Investigation: A forensics tent was set up in Ponders End Recreation Ground 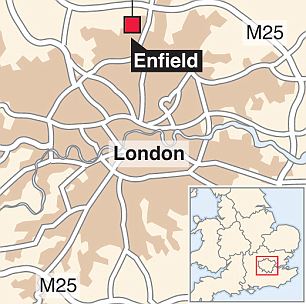 The victim and his attacker, who cannot be named, squared up in an area of the park known as ‘The Gym’, which contained exercise equipment arranged in the pattern of the 2012 Olympic logo, jurors heard.

‘But what unfolded that afternoon on the London 2012 logo, just less than a year before London’s games, in no way reflected Olympic ideals to be celebrated in this city in coming weeks,’ said Mr Penny.

‘For while there was violence, it did not proceed according to Queensberry rules.

‘To those who were watching what was expected to be a fist fight transpired to be anything but.’

Leroy, a pupil at the Aylward Academy in nearby Edmonton, was pronounced dead by paramedics at the scene, despite the efforts of an air ambulance crew.

A post-mortem examination gave the cause of death as a single stab wound to the heart.

The alleged killer harboured ‘ill feeling’ towards Leroy and the ‘N9 guys’ – a reference to the north London postcode area including Lower Edmonton – and had posted messages about buying guns to kill them, the court heard.

He fled the scene immediately after the stabbing and headed for a friend’s house, where he confessed to the killing, jurors were told.

The 15-year-old denies murder and possessing an offensive weapon.
The trial continues.